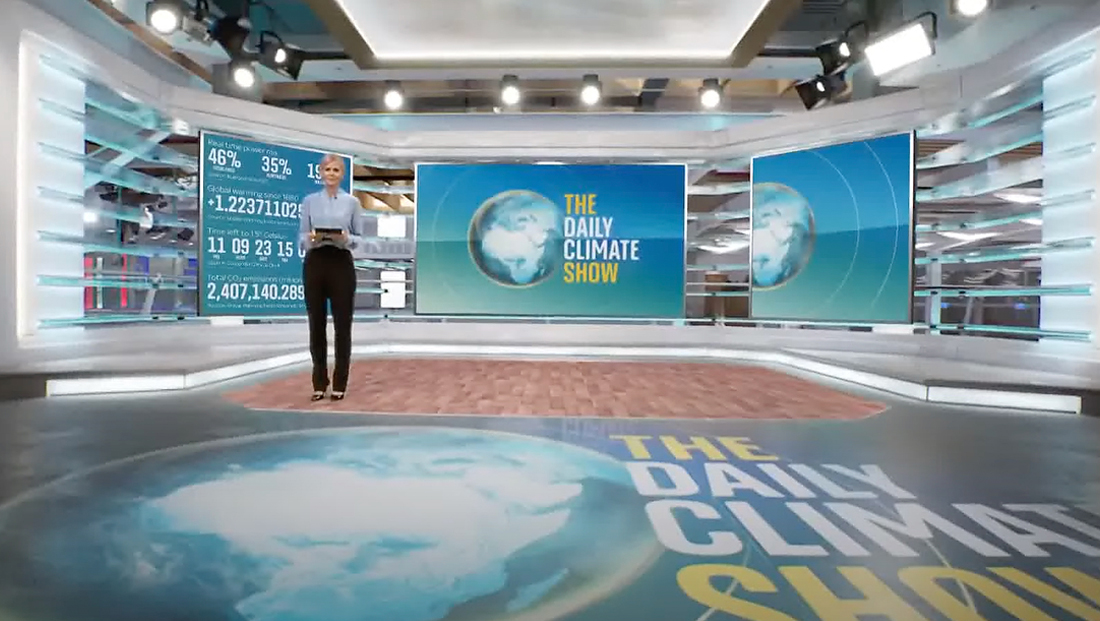 Sky News launched the first daily newscast devoted solely to climate change from a virtual studio that draws on the network’s headquarters building while providing digital canvases for maps, graphics and data.

“We have created a fresh new program identity, studio and graphics package, built around ever-changing data and statistics designed to highlight the immediacy of the global warming problem. It’s great to be part of an organization that is serious about covering the climate story with a daily program, designed to reach audiences on all platforms,” said Harry Ward, creative director of the News Designs team at Sky Creative.

“It’s great that Sky News shared our drive and ambition to deliver a fantastic new virtual studio and for such an important topic, they backed us by upgrading their current virtual studio to Unreal, which gave us the opportunity to push the boundaries and create an amazing space,” said Jason Landau, Sky Creative’s creative director, Innovation. “The team also worked closely with Sky’s Graphics & Data team to deliver the engaging live data, which is used within the broadcast design and virtual studio.”

In the virtual environment, the far background features imagery of the Sky News HQ atrium, which is visible from one of the network’s non-virtual studios, the so-called “glass box” Studio 21. 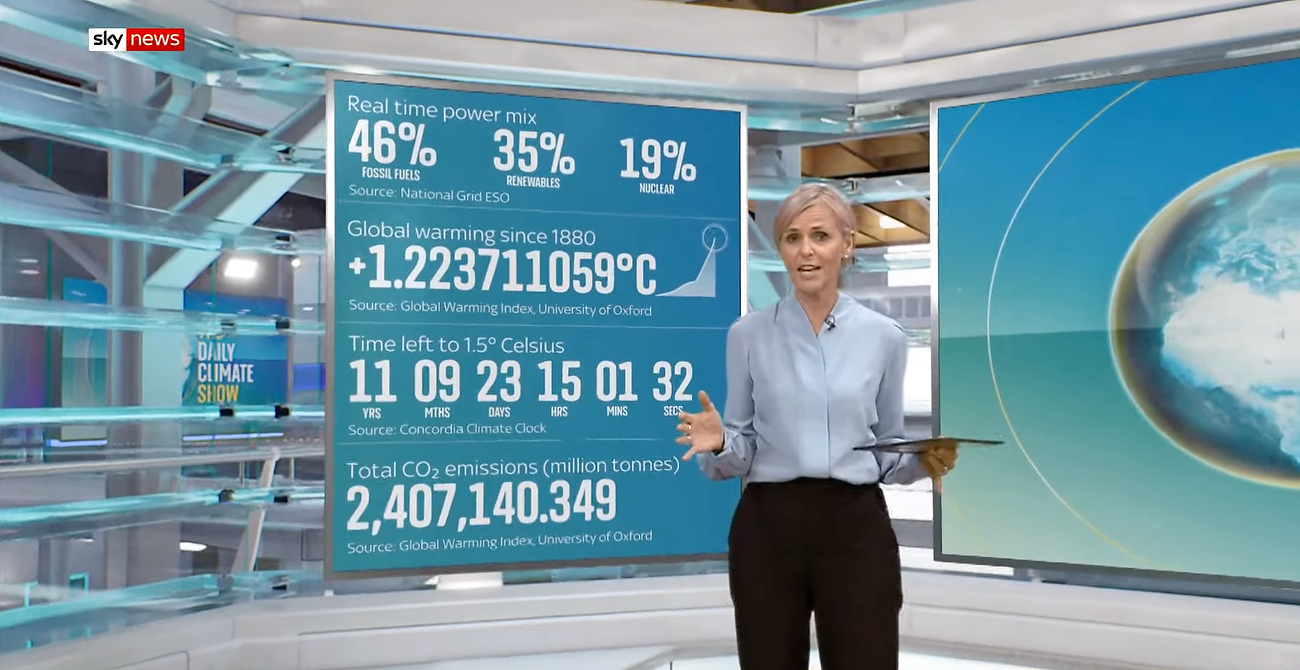 The left virtual video all is used to showcase data on stats such as real-time power mix between fossil fuels, renewables and nuclear, the rise in global warming and carbon dioxide commissions as well as the Concordia Climate Clock count to 1.5 degrees celsius.

In front of this stands a roughly U-shaped “set” outfitted with horizontal glass bands and three “video walls” — the outer two portrait orientation and the middle landscape.

The center “video wall” is used to showcase a variety of maps and topical graphics throughout the show.

It also can showcase footage related to the topic at hand and be referenced by Jones, who stands on a virtual wood-toned floor ringed with an internally lit riser with angled corners.

The studio was made possible by camera tracking from Mo-Sys and keying from Blackmagic’s Ultimatte system with the real-time data walls powered by Vizrt. 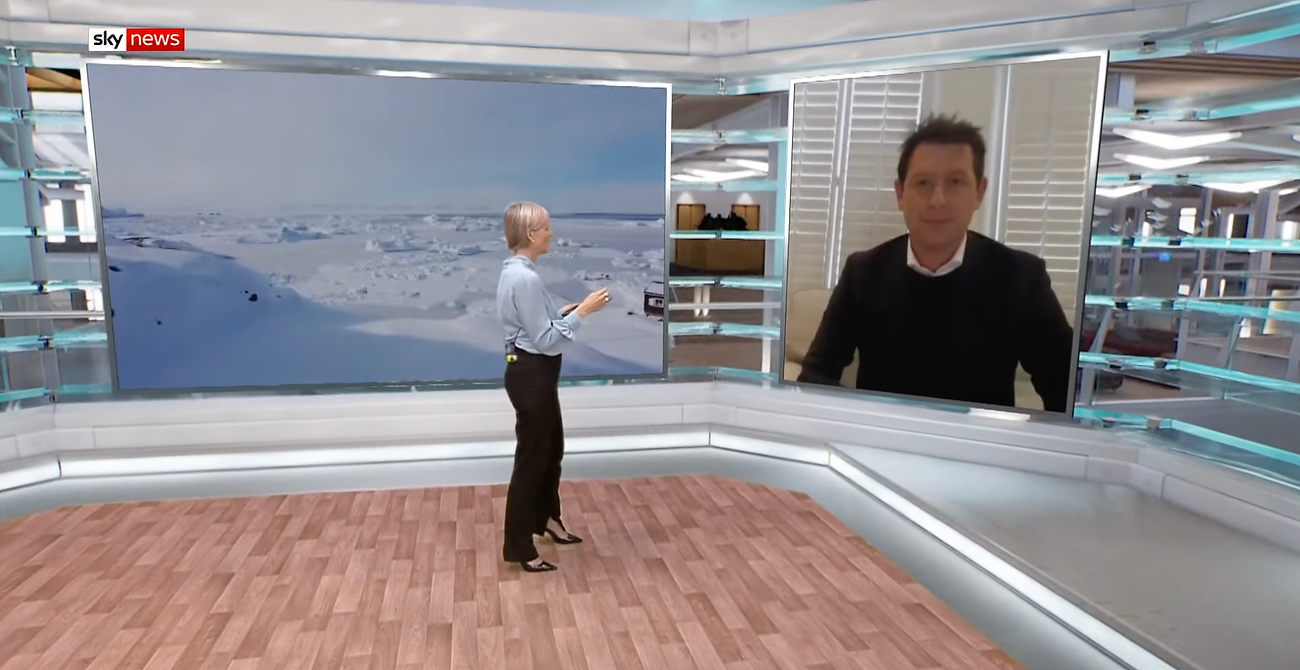 On the opposite side of the virtual space is a ‘screen’ that can be used for Jones to interview remote guests. Jones also had an in-studio guest on the debut edition April 7, 2021.

The show’s open and graphics used a blend of greens, blues and golds and, not surprisingly, the image of a globe. Concentric rings radiating from the globe are used as accents, while the globe itself has a sort of green, sort of brown “atmosphere” around the edges, perhaps a nod to the pollution built up while also suggesting there is hope for the future thanks to many of the topics the show will tackle.

Meanwhile, the show’s title card features the name in bold gold and white all caps lettering that is revealed after each line cycled through a variety of climate-related words that “cycle through” the space occupied by the four tiers of text.