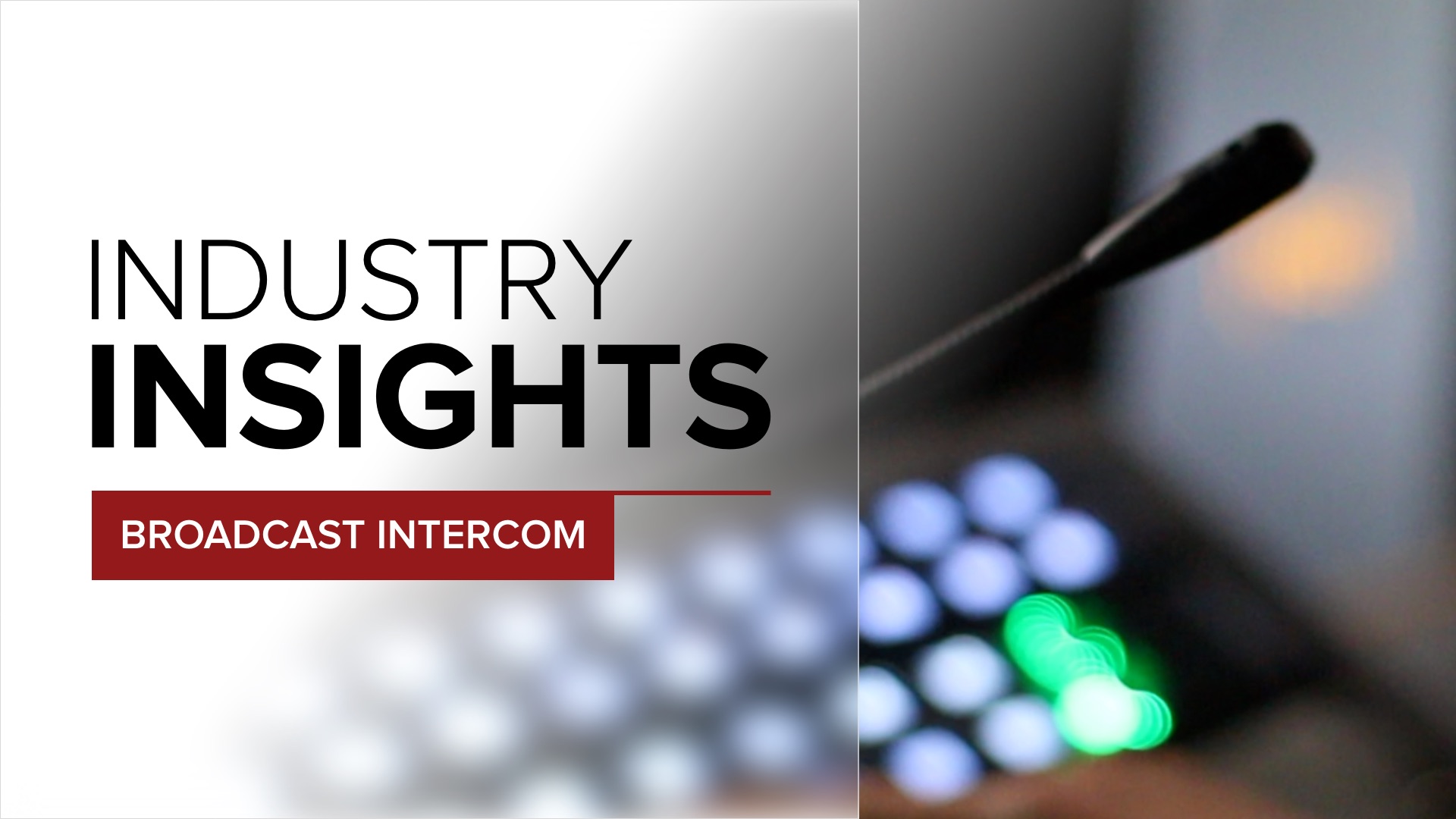 The past year has turned spare bedrooms and kitchens into remote production centers for broadcasters. Along with cameras and lighting gear, intercoms have played a vital role in keeping talent connected with producers and directors, who in many cases, were also working remotely.

In this installment of our Industry Insights roundtable, our experts from the field of broadcast intercom solutions discuss the changing nature of communication.

Industry Insights: The future of audio mixing in broadcasting

How are studio audio and intercom workflows being optimized or changed based on lessons learned during WFH?

“2020 forced many to rethink their workflows, and it seems like working from home and socially distanced productions have increased acceptance for IP solutions. This past year has dispelled any remaining doubts about the practicability of IP workflows and has shown that IP does not have to be complex,” said Karsten Konrad, a senior product manager for Riedel Communications.

“It’s been learned that entirely studio-based comms solutions are not sustainable in situations like COVID-19. Mobility and flexibility of comms is necessary to continue working when key members of a production team are required to call the shots from a remote location. In many cases we have seen customers optimizing features of their systems that already existed, like the Agent-IC Mobile intercom app, that transitioned from a cool feature to a vital tool,” said Rom Rosenblum, an applications engineer for Clear-Com.

“TV studios have accelerated their move toward cloud-based workflows out of sheer necessity as broadcasters continue to stay home, with cloud spending rising exponentially in the first half of 2020. The need for scalable, reliable, and secure off-prem products and services will continue to grow, with broadcasters becoming increasingly adept at these workflows,” said Martin Dyster, VP of business development for Telos Alliance.

“At Telos Alliance, we are excited by this and have accelerated our own transition to cloud-based products based on this demand. In fact, we just introduced our latest in IP Intercom, the Telos Infinity VIP Virtual Intercom Platform, which takes fully-featured Intercom into the cloud for the first time,” added Dyster.

“For example, a very popular solution to communicate with people working from home in 2021 is VoIP using virtual intercom panels, which allow a regular computer or a mobile device to function as an intercom endpoint. Also, the integration of panels or audio into an intercom system via long-distance connections with interfaces like our Connect IP products is key for today’s distributed productions,” said Konrad.

“With less people in the studios, the need for reliable wireless, full-duplex communications that can roam throughout a facility can become a critical communication need. The ability to monitor the status of users on the intercom system remotely via software can be a significant benefit,” pointed out Gary Rosen, VP of global sales for Pliant Technologies.

How has reduced staffing in studios changed studio audio workflows?

“Multiple jobs are now covered by the same person, so the communication needs to be more disciplined and therefore the UI needs to be more intuitive,” said Felix Kolls, a product manager at Riedel.

“The work paradigm has shifted but the workflow has stayed much the same—the audio person is still controlling the console in the studio—but now instead of sitting in the control room, they’re sitting at their computer at home,” explained Rosenblum.  “Other than distance, the application of the comms system. Much more dependence on IP connectivity. Migrated to more IP, it may have already been there, but now they’re using the public internet rather than the Wi-Fi in the studio,” he said.

“With less technical staff available onsite, intercom technology that is not only reliable but is easy to use is an important consideration. Users often need to just turn on and go, so systems that require a full-time operator can be draining resources that are needed elsewhere,” Rosen said.

“Our 1200 Series SmartPanels are a great example of this, because we have put a lot of thought into making the UI and the signaling as straightforward as possible. With full color, high-resolution touch screen displays with icon support and up to 8+16 characters per key, we have made sure the function of each key is easily understood,” said Kolls.

“We have seen a steady increase in our Agent-IC mobile intercom app downloads over the last year, and there is also a significant amount of broadcast customers adding more LQ IP Interfaces to their workflows to integrate into their existing intercom system while also facilitating the remote capabilities of Agent-IC,” said Rosenblum.

“At Telos Alliance, our vision of the future is a suite of virtual audio and intercom solutions that are fully integrated with both virtual and hardware-based environments, giving complete flexibility as to how the user wants to deploy and interact with the technology,” answered Dyster.

How do you envision studio audio and intercom workflows in the control room or studio of the future?

“The need for remote work in times of social distancing will leave its mark. Remote production workflows are now more accepted than ever before, so to effectively deploy them we need more and better tools to ensure that non-technical, creative people can do their job from home. To ensure efficiency for these teams, the aforementioned intuitive UI and signaling, as well as more automated signal processing and remote controllable solutions will be absolutely crucial. Another great way to assist creative folks whenever they feel overwhelmed by the technical complexities of remote productions is remote support, as provided by our Remote Operations Center. This advanced form of remote support, which may include 24/7 monitoring and remote system control, is a great fit for socially distanced times, but also greatly reduces personnel costs and carbon footprints,” Kolls responded.

“The future is already here, we’re among a new paradigm. The SMPTE 2110-30 protocol uses IP connectivity to connect everything that used to connected analog. SMPTE is still level three, however, and it will only continue to become more efficient in transporting audio, thereby shifting latency protocols,” Rosenblum said.

“We have seen a trend in recent years towards simplified production workflows, and this has accelerated considerably during the last 12 months as the pandemic has exacerbated the move of technology into the cloud. Automation has been an important part of the story, whether something as relatively simple as Automix as a feature in our consoles or the need for the Audio Mix Engine to slave to the Vision Switcher to the extent that audio production is entirely ‘hands off’. We believe that this trend is likely to continue and that we will see growth in areas such as AI-driven workflows where the production tools are driven by predictive algorithms rather than manual operators,” Dyster said.

“People are used to cell phones and other wireless devices, so wired intercom for many users is not as desirable as they expect greater mobility than in the past. Even users that are traditionally at a stationary position often need to move around, and the production team wants to stay in communication with as many people as possible. Traditionally, a cameraman had a headset that was wired to their camera PED position, but now the production staff wants to be able to communicate with them, even if they are on a break and away from the camera,” Rosen explained.

After the jump, we look at the continued march to  IP, automation and changes to control interfaces for intercoms.