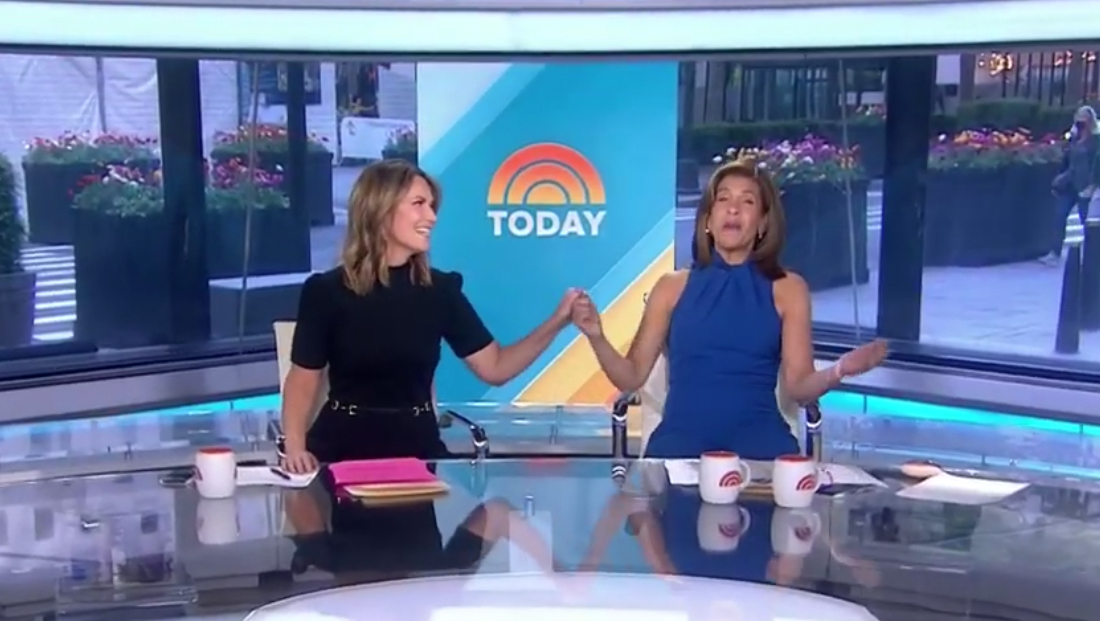 After over a year of social distancing on set (or anchoring shows remotely), NBC News‘ “Today” moved its two primary co-anchors Savannah Guthrie and Hoda Kotb back to their old spots behind the anchor desk Friday, May 14, 2021.

Over the past year of the coronavirus pandemic, most networks and local stations with two or more anchors have placed them farther apart — sometimes even to the point of not quite fitting behind the anchor desk— or placing them in different locations in the same studio or in different buildings.

At first, that extra space felt a bit like when the broadcast industry was in the middle of converting to high definition and the 16:9 aspect ratio while still preserving the 4:3 “safe area.” Anchors began sitting slightly farther apart at that time — and some viewers took notice.

With most of the world in the 16:9 camp now and many major broadcasters no longer obeying the 4:3 safe area, the coronavirus pandemic made it easier for anchors to sit even farther apart without having to adjust framing too much.

The move comes the day after the CDC announced that fully vaccinated individuals no longer need to wear masks or socially distance indoors or outdoors.

However, officials noted that individual states, municipalities and even companies can and still may enforce mask requirements in certain situations. NBC apparently gave the OK for “Today” anchors to cut out the social distancing component.

Guthrie and Kotb have both publicly announced they are fully vaccinated.

Throughout the pandemic, many stations and networks have largely avoided in-studio guests or reporter debriefs, instead having reporters join from outdoor live shots or from home via video calls. Typically anchors do not wear masks on set (though many field reporters still have been), but protocols typically require them to do so until seated behind the anchor desk.

However, the morning of May 14, Guthrie and Kotb were back sitting at their normal distance: Perhaps three feet apart or so (they were close enough to physically reach out and touch the other.

They are still seated behind the enlarged anchor desk the network brought in in August 2020. 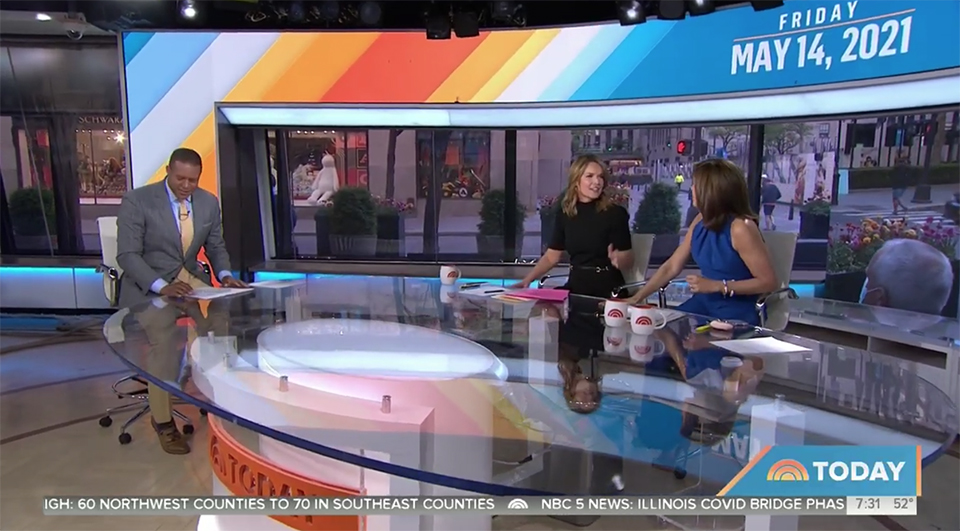 When co-anchor Craig Melvin joined Guthrie and Kotb at the anchor desk, he remained fairly far away, though it’s not uncommon for additional people joining two anchors at home base to sit a bit farther away. 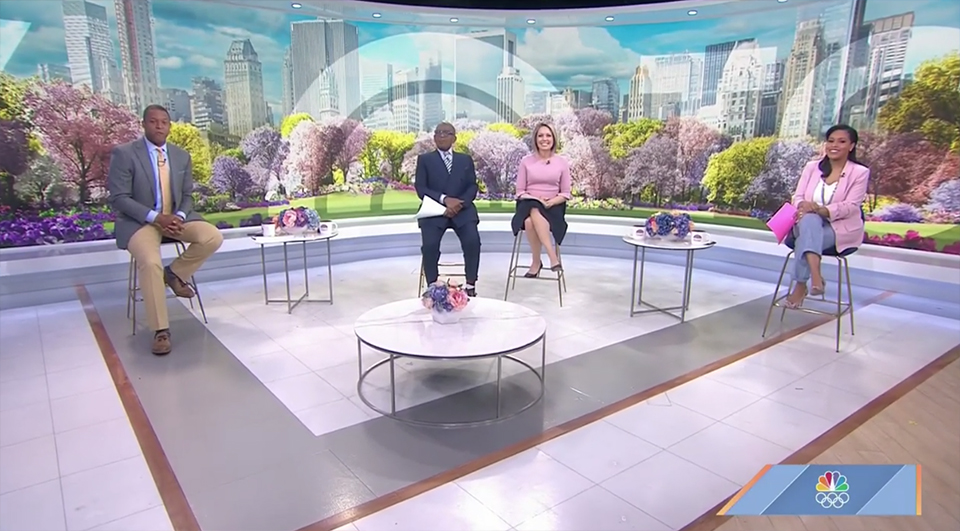 On ‘Today Third Hour,’ Al Roker and Dylan Dreyer sat close together in the center of Studio 1A’s video wall, with Melvin and Sheinelle Jones farther off to each side. 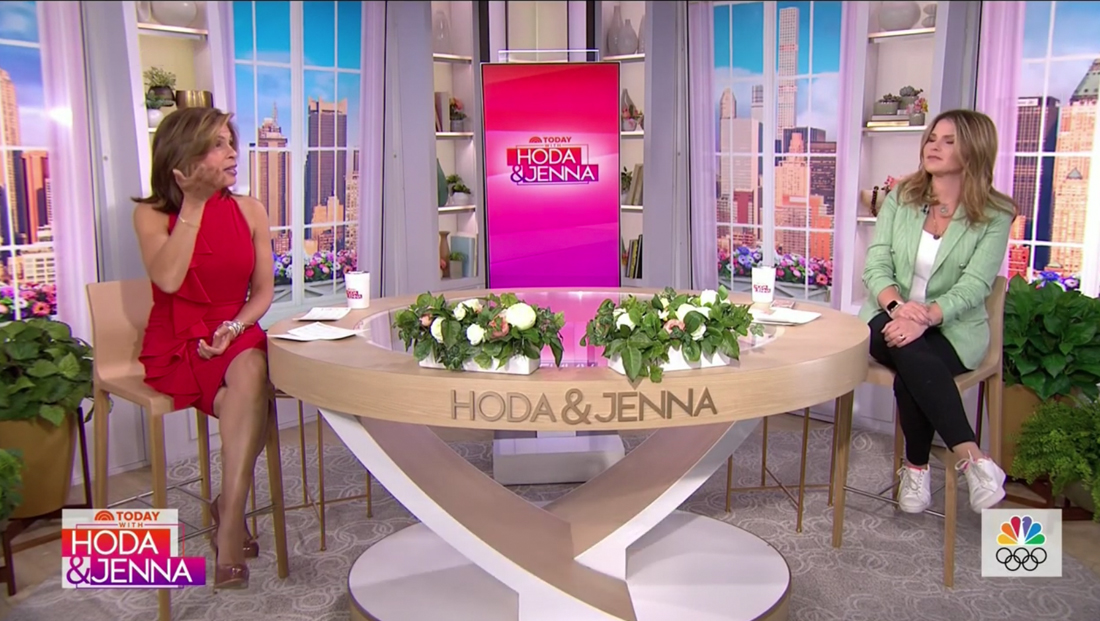 The fourth hour of ‘Today,’ branded ‘Today with Hoda and Jenna,’ has been broadcasting from the satellite production area (SPA) on the second floor of Studio 1A off and on and still had the hosts socially distanced — sitting off to the side of the large oval table they previously sat behind.

“CBS This Morning” uses a round anchor desk for its three primary co-anchors that spaced them out fairly well. It hasn’t, however, switched back to changing the positions anchors sit (sometimes two or more would sit closer together to allow a guest to join them at the desk).

Fox’s cable network, which has spent much of the pandemic downplaying the seriousness of it and featuring guests behind conspiracy theories, still had its “Fox & Friends” co-hosts socially distanced on set Friday morning.

Earlier this month, the three co-hosts returned to the “curvy couch” after spending much of the last year inside boxes from various parts of the studio, noting that they had all been fully vaccinated.

Other signs that social distancing requirements are relaxing inside TV studios have popped up as well.

On May 12, 2021, MSNBC’s “The ReidOut” noted that colleague Lawrence O’Donnell would join Joy Reid in studio. Reid’s show premiered in the middle of the pandemic and had never had an in-studio guest until that point (Reid and O’Donnell were in the network’s Washington, D.C., studio used for the Saturday editions of “Today” and other MSNBC shows that debuted during the pandemic as well.

.@JoyAnnReid was joined by @Lawrence tonight in the studio, making him #TheReidOut’s first on set guest in the show’s history. Here’s some behind the scenes fun before their segment!

Many anchor desks are designed for talent to sit in specific places (often marked by a “belly button” tape mark on the edge of the desk to help talent find their marks).

Often this is designed to give them access to built in keyboard trays, return and other monitors housed inside the desk as well as computer screens. Chin fill lighting incorporated into the desk are also often aimed at specific positions behind the desk.

Overhead studio lighting is also typically designed with the assumption that talent will be in specific parts of the set.

Over the course of the pandemic, many stations tweaked their setups, adjusting lighting and gear for the anchors. Some brought in laptops or moved keyboards to the top of the desk while talent had to glance a bit farther to see return and feed monitors. Other stations added monitors off camera facing anchors or suspended from the ceiling.