‘Today in 30’ looks to ‘All Day’ graphics for inspiration 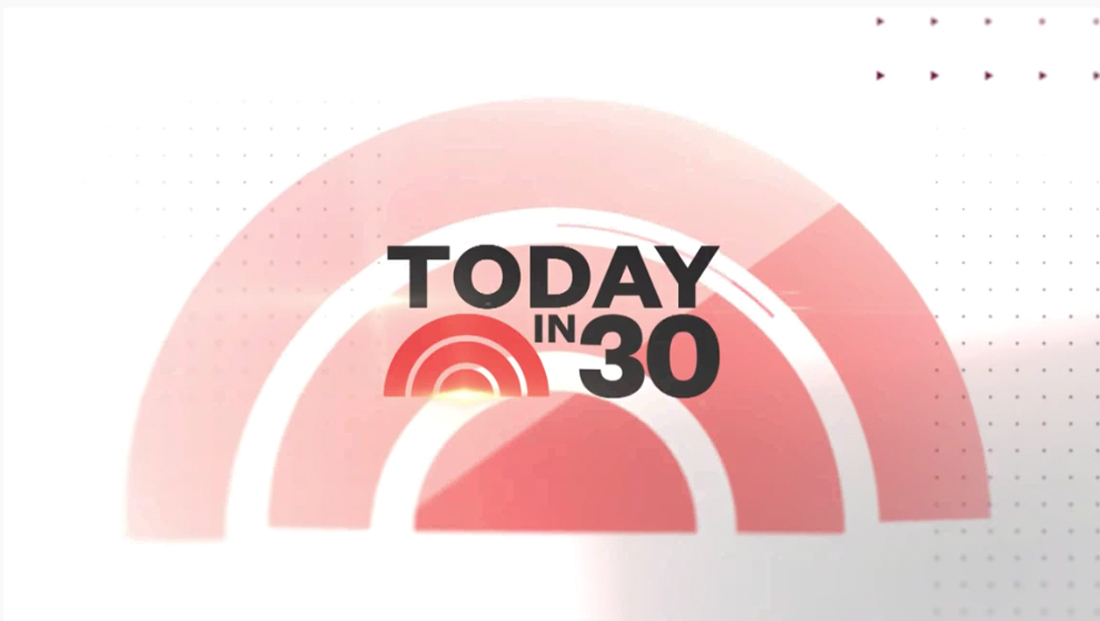 NBC announced that “Today in 30” would launch June 8, 2021, but an episode was posted June 7, perhaps as a sort of “soft launch” — though the June 8 edition was billed as the “first” show at the top of it.

It was the summer of 2020 when NBC announced it would launch a streaming channel devoted exclusively to content from “Today” and also introduced the off white, deep red, orange and dark violet look that is still used, with some modifications, now.

“Today in 30,” meanwhile, works off that existing look, including the horizontal bands of animation and mattes that were more reflective of the main “Today” show graphics package before its May 2021 redesign.

The on set graphics used for “30” surrounding home base include more of an emphasis on the off white background and orange rings of the show’s sunrise icon.

An “in 30” is added to the logotype, set in what appears to be a different sans serif than the “Today” logo, new insert graphics (Flama Condensed) or Founders Grotesk used on other “Today All Day” graphics.

“Today in 30” itself appears, at least based on its early editions, to simply be various segments from the four hours of “Today” with a unique anchor intro and outro taped the same day that, at least so far, features the anchors “pretending” to speak directly to the audience.

Co-anchors Savannah Guthrie and Hoda Kotb, or whoever anchored the first two hours that morning, do mention timely news stories in these segments and are wearing the same clothing as they did on the show earlier in the day.

So far, the show has used the same top story “Today” proper used, with taped footage from the live feed earlier in the day edited in after the fresh intro. Segments are borrowed from all four hours of “Today,” depending on content.

The show features, at least on YouTube, a slot for a commercial break “baked in.”

Before the break is dynamically inserted, a generic voiceover tease with a shot showcasing the show’s logo on a studio or control room video panel is shown.

Interestingly, the “stick around, because there’s more coming up on ‘Today in 30′” VO used June 8 featured the voice of Kotb, who was out that day (Craig Melvin filled in for her with former ABC anchor Tom Llamas joining the show later in Melvin’s de facto third co-anchor role).

Another interestingly thing to note is that the show doesn’t appear to actually run for 30 minutes, despite its name.

So far the runtimes have been 24 minutes, 55 seconds and 25 minutes and 21 seconds, according to the timestamps on YouTube.

Linear TV traditionally has about eight minutes of commercial time per 30 minutes on the schedule — while most streaming services offer significantly less advertising.

Streaming and online video platforms also typically dynamically insert advertising based on a variety of factors and some ads are skippable, so the actual runtime of a taped streaming show and advertising could vary slightly based on the number of ads served, how long they were watched and how many, if any, were skipped.

Since the show is assembled from existing clips and features a limited number of unique anchor segments, getting it to time out to exactly 30 minutes could be tricky, since extra time can’t be filled with “happy talk” or other filler techniques often used in TV news.

That said, knowing the exact timing of segments captured live to tape could actually make it easier to time out a show like “Today in 30,” but that would also require the producers to have everything timed out prior to taping the intros and outros each day, which are likely done at some point around or during the first two hours of the show to avoid having the anchors return to set.

Assuming that’s the case, many of the segments that will eventually make it into “30” would not have aired yet when the tapings are done, which would make it impossible to time it out exactly.

“Today All Day” is a separate streaming “channel” from NBC News Now, the network’s general news feed, and Peacock, NBCUniversal’s streamer that includes entertainment programming from across its empire.