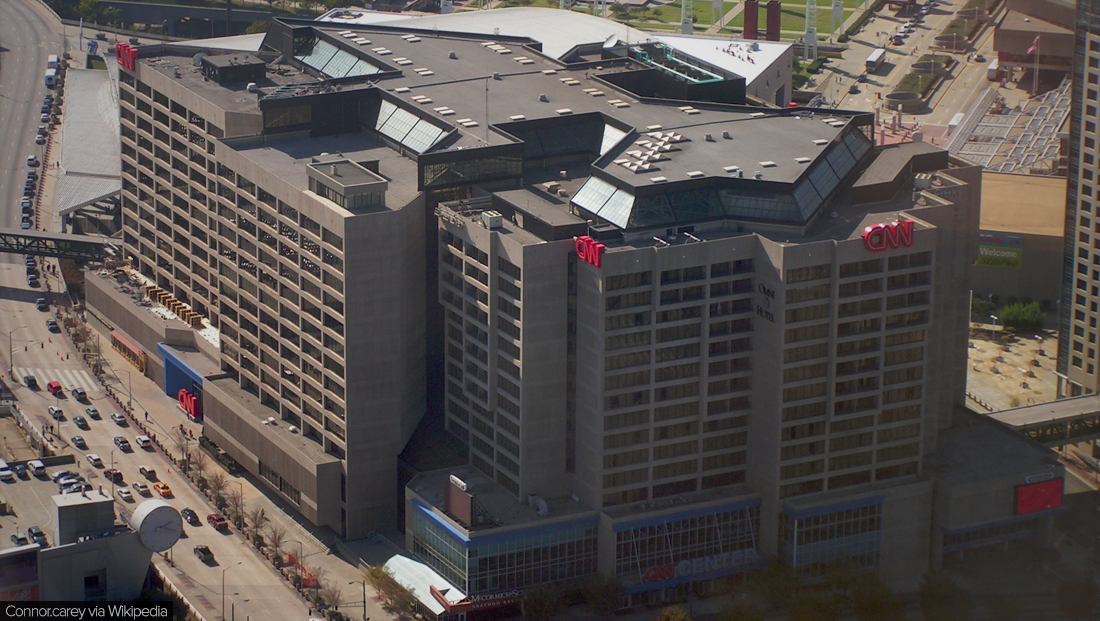 CNN Center in Atlanta has been sold.

On July 2, 2021, a company called CP Group based in Florida announced that it would buy the property for an undisclosed price.

Included in the deal as a leaseback agreement for CNN and WarnerMedia, which are owned by AT&T, to continue to occupy space in the mixed use facility.

The announcement only mentioned that the lease arrangement will last at least five years. There is no word on if the building will continue to be known as “CNN Center” or if the network’s iconic logos will remain atop of the building facade.

WarnerMedia, which was created after AT&T purchased TimeWarner, has invested heavily in office space for its Turner Broadcasting division in the Techwood region of Atlanta, which also happens to be near the original home of CNN and at least one report has mentioned CNN will eventually move most, if not all, CNN staffers out of CNN Center.

WarnerMedia is also in the early stages of merging with Discovery, which could cause its facility needs to change if the deal ends up triggering layoffs or “cost synergies” as they are often referred to.

The company has invested significantly in building an IP based master control hub in the Techwood campus rather than pouring more money into CNN Center.

In June 2021, AT&T announced it had paid the State of Georgia $18.8 million for the ground and air rights to the land and space above the complex. While CNN owned the structure, the land beneath it was still owned by the state and the transaction had been viewed, at the time, as a way to make a full out sale of the complex more appealing.

CNN Center is still officially CNN’s World Headquarters, despite the fact the network has invested less and less in the facility over the years, instead pouring millions into facilities in New York and Washington, D.C. as well as Los Angeles and the Techwood buildings.

Originally, CNN Center contained not only the main newsroom for the network (with New York and Washington serving more as bureaus), but a primary anchor desk overlooking that newsroom as well as additional studio space.

Visitors could also tour the space and view the newsroom from a purpose built observation mezzanine. Tours of CNN Center have since been shuttered due to the coronavirus pandemic.

CNN moved into the complex, originally known as the Omni Complex, in 1987. The building was opened in 1976 and features a public shopping and dining atrium, hotel, connected sports arena and leasable office and retail space. Turner divested its stake in the Omni hotel in 2016 in favor of investing in Techwood.

Its location become more desirable when the Centennial Olympic Park was opened nearby ahead of the 1996 Summer Olympics in the city.

WarnerMedia originally owned its space in New York’s 30 Hudson Yards, but opted to sell the space with a leaseback option for $2.2 billion in 2019. Its lease runs through at least 2034.