MSNBC took out a full page ad in The New York Times to mark its 25th anniversary.

The ad features a blue background and text reading:

Below that is the NBC peacock with the circular “25” icon that has also been on MSNBC air all day and the tagline “This is who we are.”

The bottom of the ad features the line “Thank you to all our dedicated employees and loyal fans for 25 incredible years.” 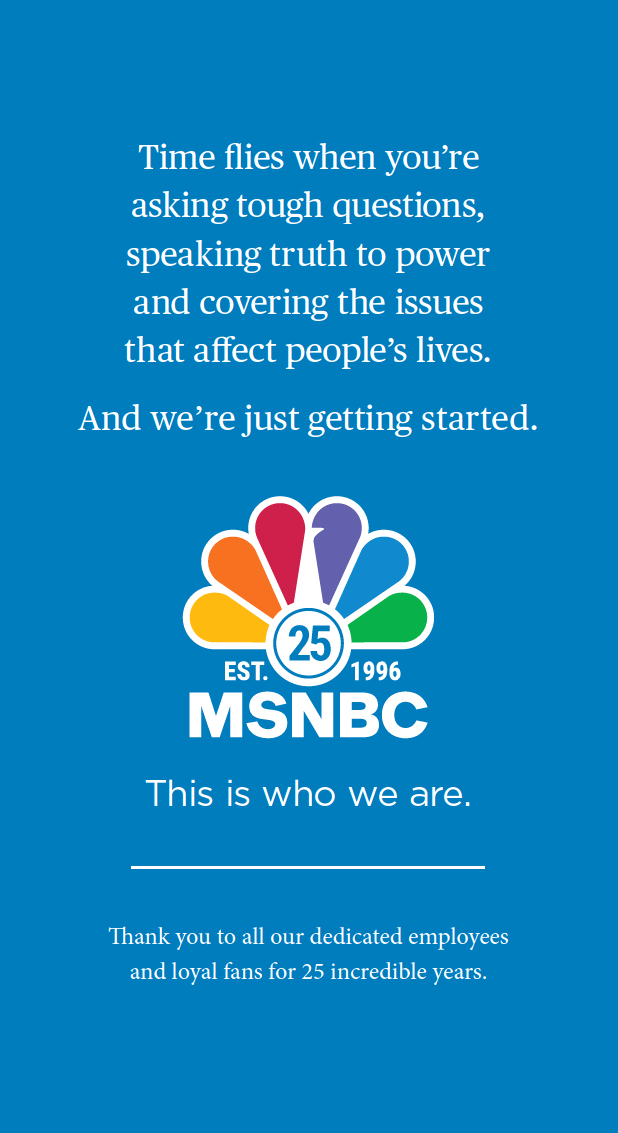 The digital version of the ad that was printed on the back of The New York Times’ A section July 15, 2021.

The ad features the new MSNBC logotype in the proprietary font Wordmark that was updated this year and the “established” and “25” appear to set in Roboto, which the network uses in its lower third banners.

The upper text of the ad appears to be set Publico Text, a font used on NBC News digital properties, perhaps most prominently in headlines on today.com. Meanwhile, the “This is who we are” slogan is set in the geometric typeface as it appeared in the network’s previous iteration of promos bearing the same tagline — which have since been updated.

Much of the language in the print ad itself echos that of the on screen text used in the network’s promos.

The blue background is close to the new colors scheme the network introduced for its “MSNBC Reports” branding and graphics that rolled out earlier this year.

MSNBC overhauls ‘this is who we are’ campaign with new look, sound

Meanwhile, the font at the bottom is set in Minion, which isn’t in the NBC News typography wheelhouse. It is worth noting that in some Adobe software commonly used in newspaper publishing, such as InDesign and Acrobat, Minion is the default font that’s used if the program can’t find the correct font file installed locally.