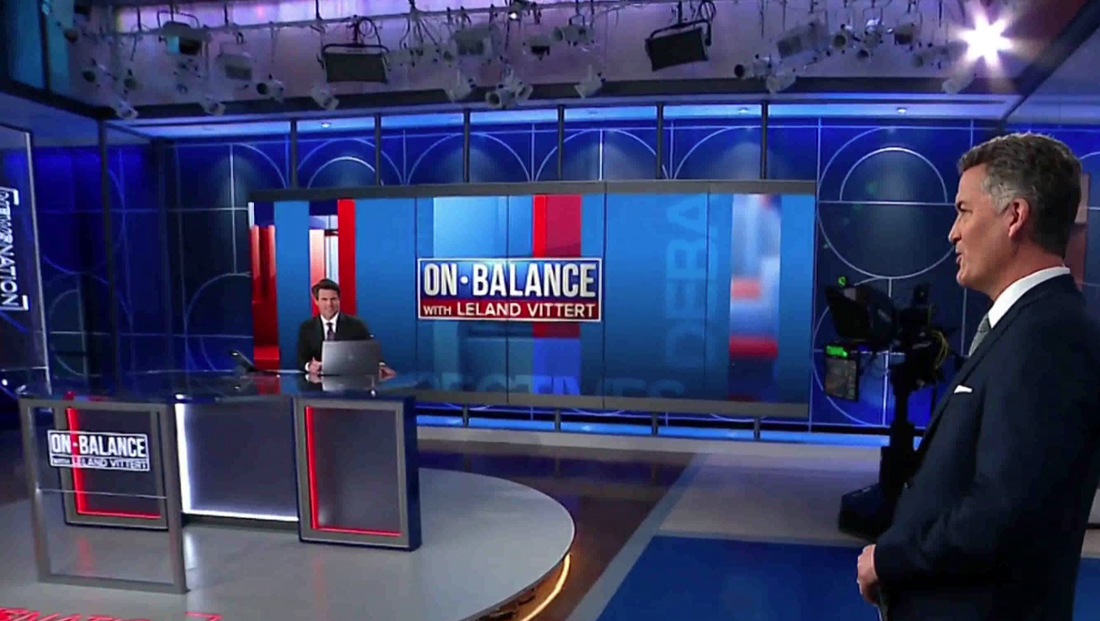 Nexstar’s little watched NewsNation network unveiled yet another lineup change that rebranded one show and introduced a completely new one July 19, 2021 that continued to evolve the struggling network’s look. 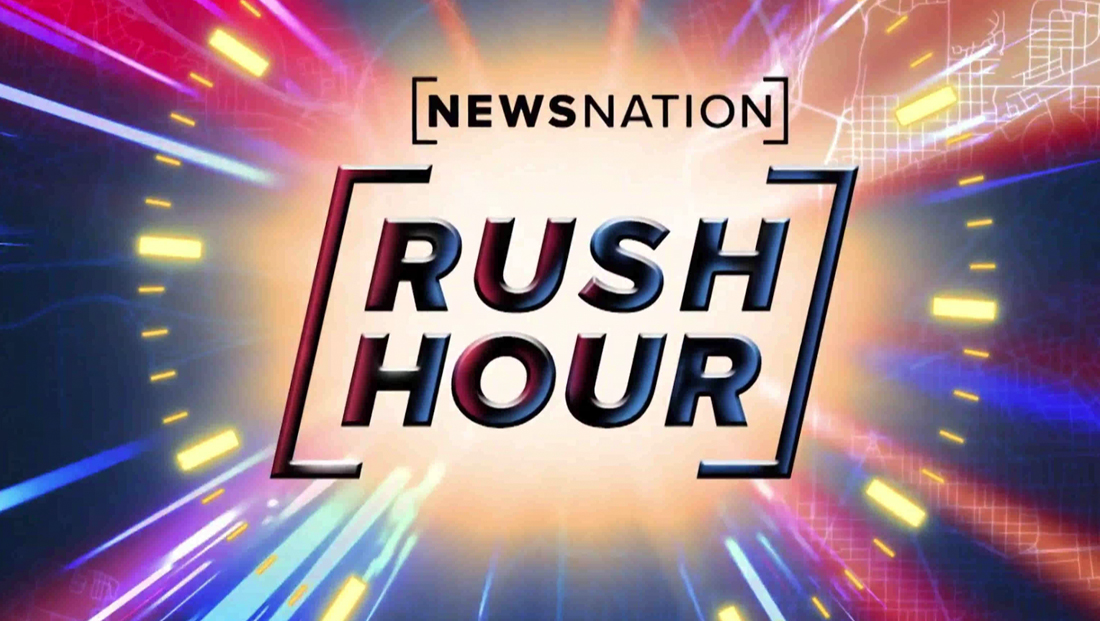 “Rush Hour” appears to be positioning itself as a faster paced look around the country and uses a darker look that incorporates bright paths of light and circular elements, including a clock-like hashmark element and an animated wipe inspired by the hands of a clock as well. Some of the light elements can also be found in the “NewsNation Prime” look.

The show uses an angled logotype with subtle blue and red reflections on the lettering placed inside the network’s trademark brackets, which are also angled.

“Rush Hour” is anchored entirely from the network’s newsroom set, one level up from the main studio set built inside of WGN’s Chicago studios.

In keeping with the fast paced theme, Berlie doesn’t sit at a desk and plenty of handheld shots take viewers on dramatic push-ins to the set or, in bumps, through the newsroom itself.

Multiple segments feature a U.S. map motif with glowing dots that appear to represent Nexstar’s 100-plus local newsrooms across the country displayed on one of the set’s video walls with a tangle of light paths continuing along the curved portion of the installation.

For select segments, larger, yellow versions of states being discussion can “pop out” of the graphic, while at other times the map simply stands on its own with the gold dots representing stations “twinkling” subtly.

The three vertical panels installed on the opposite end of the space were used to showcase a trio of live reports from across the country, again emphasizing the idea of moving quickly across the U.S. 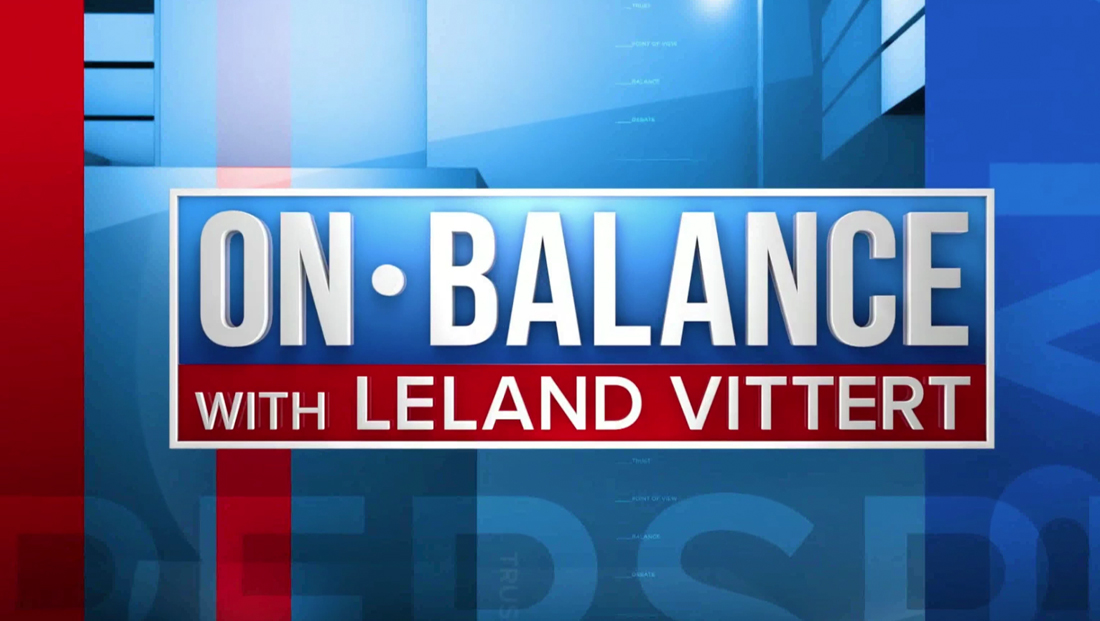 The show’s open and graphics are a bigger departure from the evolving look for the network, which originally started as a flatter, boxy look in dark blue and beiges.

As new shows were added and others rebranded, additional elements were brought in.

Instead, this open has much more of dimensional look and takes on a more traditional blend of what most would consider a patriotic red, white and blue palette.

While there are plenty of rectangular elements and right angles used, a trend that other NewsNation shows have been adding, there’s no obvious reference to the bracket element — but the show does still use lower third banners based on the original versions — albeit with a red and white color scheme.

The animations also leverage more “fly by” and “twisting” effects, including in a rather obtrusive animated bug that appears throughout the entire show, rotating between the show title on its own and “with Leland Vittert.”

Throughout the show, the movable video panels are used in a variety of configurations behind host Leland Vittert, a former Fox personality, including joining together on air to showcase a rundown style graphic and being positioned at angles to add some dimension to the backdrop.

The anchor desk, which features movable panels to allow for a variety of eating arrangements, was used for a one-on-one in-studio interview as well as a two person one on the premiere. Guests were seated camera left, with portions of the set’s glassed in weather center and vertical video wall installation appearing behind one shots.

It also received its own, custom glass etched logo panel, just like others show that use the space do (“Banfield,” which originates from Connecticut, also has its own glass panel that the network uses in bumps).

The color changing LED in the riser and desk framework is switched to a bold red, as is the NewsNation logo on the front of the riser.

“On Balance” was also bookended by in-studio tosses from its lead in and into “NewsNation Prime.” When host Joe Donlon wrapped “The Donlon Report” at 8 p.m. eastern, Donlon, standing next to one of the set’s smaller wall mounted pivoting video panels, was shown before the camera pulled back to show Vittert at the anchor desk steps away from Donlon.

When “On Balance” wrapped, a sort of overhead view of the studio showed Marni Hughes and Rob Nelson waiting on set to take over with “Prime.”

“NewsNation” was originally the name of a three hour primetime newscast that aired on what was then known as WGN America and debuted in September 2020. Earlier in 2021, Nexstar changed the name of the entire network to NewsNation and rebranded the primetime show, which was cut back, as “NewsNation Prime.”

In September 2021, NewsNation will again revamp its schedule, with ABC News legal analyst and former MSNBC host and exec Dan Abrams joining at 8 p.m. eastern, forcing “On Balance” to move to a yet to be announced time.