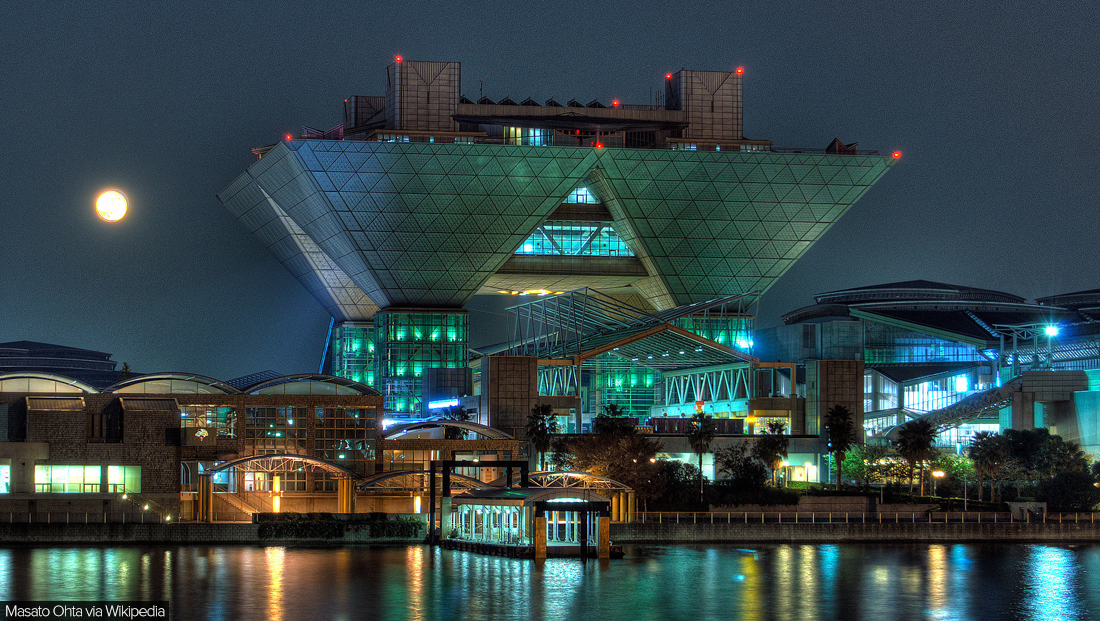 For the 2020 Summer Olympics in Tokyo, the International Broadcast Centre and Main Press Centre are set up inside of Big Sight, which is officially known as the Tokyo International Exhibition Center.

The facility is the largest convention center in Japan and the city has invested in substantial upgrades and changes to the facility in order to handle the needs of broadcast production.

Like many convention centers, Big Sight has multiple halls that can be used together or separately, depending on the size of the event being hosted — with the east wing of the building featuring six rectangular halls coming in at nearly 90,000 square feet each, according to the facility’s published guide for event organizers.

A hallway runs down the middle of the wing, and has been designated as the IBC’s “Main Street.”

The halls themselves are normally cavernous spaces with high ceilings and wide-open spaces that have been sub-divided using temporary structures, some of which are modular panels that were used at the 2016 Rio and 2018 PyeongChang IBCs as part of the Olympic Broadcasting Services’ goal of being more environmentally friendly.

American broadcaster NBC has taken over two large, separate segments that roughly equates to nearly all of Hall 4 in the east part of the building. A myriad of other medium to small-sized spaces throughout the space are being used by other media outlets as well as for functionality such as a briefing room, technical services and other purposes. Outside of NBC, CBC appears to have the second-largest broadcast space, however, most of its Olympic coverage is now originating from Toronto amid coronavirus concerns.

“I’d like the people of 🇯🇵 to know we’re doing everything we can to keep us safe AND YOU SAFE,” I tell the @tv_asahi_houdou TV crew.

Other broadcasters, including the BBC, are using spaces that appear to have originally intended to be studios as socially distanced workstations.

Similarly, NBC has had to spread out its team working on the Olympics between locations in Tokyo, Connecticut, New York City, Miami.

The floor plan of the entire Big Sight is available online, as is one of the east wing.

Big Sight was originally opened in 1996, meaning the host city opted to convert an existing building into the IBC and MPC. Early plans called for the facility to be used as a venue for select sporting events, but funding issues ended up relocating those elsewhere and using the building for broadcasters.

Other cities have opted to build new structures to serve as the IBC (such as in Beijing for the 2022 Winter Olympics), which are then often converted to event centers once the games leave town, so in this case, it’s the reverse of that arrangement.

Olympic host cities provide a designated IBC that serves as a giant operations “hub” for all of the broadcasters who have purchased broadcast rights to the Olympics, known as Rights Holding Broadcasters, which are typically sold on a country or regional basis and sometimes split between more than one broadcaster servicing an area.

The IBC is also home to the Olympic Broadcasting Services, which provides or distributes the majority of camera coverage from various events.

This prevents each broadcaster from having to pay to dispatch its own cameras to every venue — only to capture essentially the same images. The fact that the same feeds appear on multiple networks around the world typically isn’t noticeable, either, because most viewers can only access their home country’s coverage.

In some cases, OBS will arrange for a specific network or production team to cover certain events, but the feeds are provided to all RHBs, similar to how the “pool” system works in the United States and elsewhere.

The OBS also provides on-screen graphics with timers, scores and other pertinent information that most broadcasters use on their air. RHBs can optionally use opens and other graphics provided by OBS, though RHBs, including NBC, can opt to “cover” these with their own looks.

The OBS published a media guide for RHBs that includes an extensive overview of the technical and venue operations throughout the country.

The OBS itself has a substantial presence inside the IBC as well, occupying what appears to be at least several thousand square feet.

Of course, this year’s IBC and OBS operations have been significantly affected by the coronavirus pandemic.

Japan has a complex series of rules that journalists and crew must follow to enter the country and significant efforts are being made to keep those traveling to the city for coverage separate from the general population of Japan.