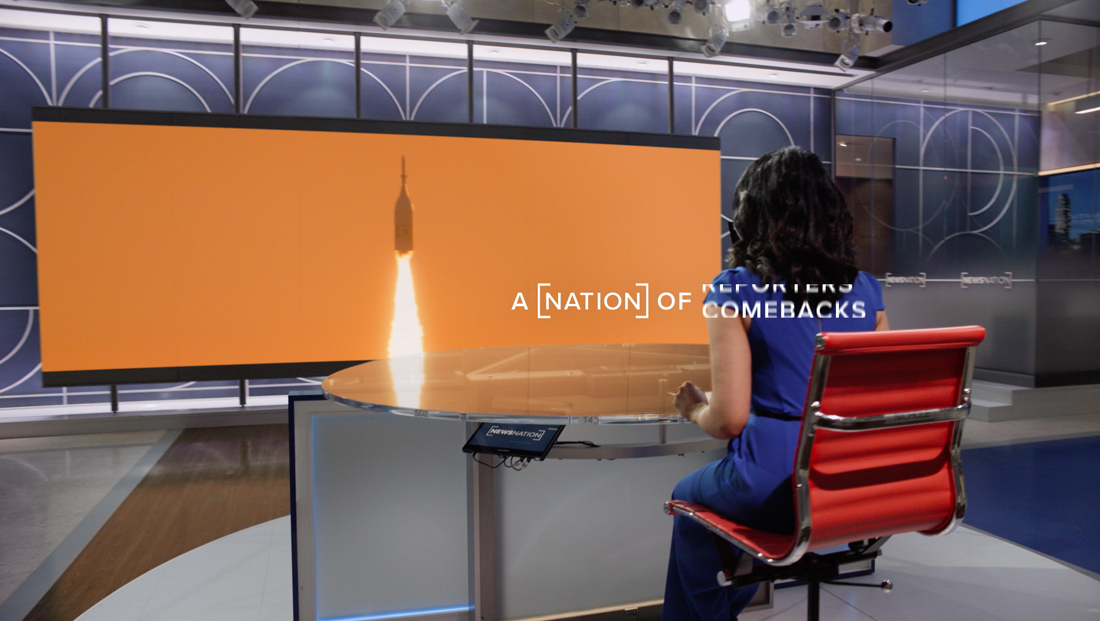 Nexstar’s little watched NewsNation has released a series of promos centered around the tagline “News for all America.”

The campaign was developed by the agency Leo Burnett and includes the network’s custom music package from Stephen Arnold Music.

The primary promo features a variety of imagery from around America along with on-screen text that uses the “We are a nation of…” or simply “A nation of…” with the word “nation” displayed with square brackets, inspired by the network’s logo.

The promo appears to be less focused on the “no bias” concept that Nexstar execs hammered home with the launch of the network that included the taglines “Your news. Your nation.” and “News not talk. Facts not opinion.” — though it’s obviously still trying to emphasize that its programming appeals to all Americans.

The centerpiece spot starts with an array of monitors showing faux imagery meant to be “right” and “left” leaning networks — while proclaiming “We are a nation of more than two sides.”

Up next is “We are a nation of neighbors,” while an image of a house with a “Black Lives Matter” sign, rainbow pride flag and the Gadsden flag.

The Gadsden flag is known for its “Dont (sic) tread on me” message and has, over time, be appropriated by a variety of causes, including libertarianism, tea party republicans, gun rights, calls for limited government and far right politics.

It was originally designed as one of the flags used by the Continental Marines during the Revolutionary War.

Following these clips is the line “A nation of debates” while clips of a statue being lifted off its base. There’s then clips of power line workers, firefighters and a crowd of spectators watching an aerospace launch, which is then shown on the network’s six panel video wall installed in its Chicago studio as the camera swings around behind a solo anchor.

There are also promos that feature or focus on talent as well as ones showcasing testimonials from NewsNation viewers. The campaign also includes a variety of short coordinating IDs and billboards.

Continue reading to view the rest of the promos, including the testimonial versions and IDs.