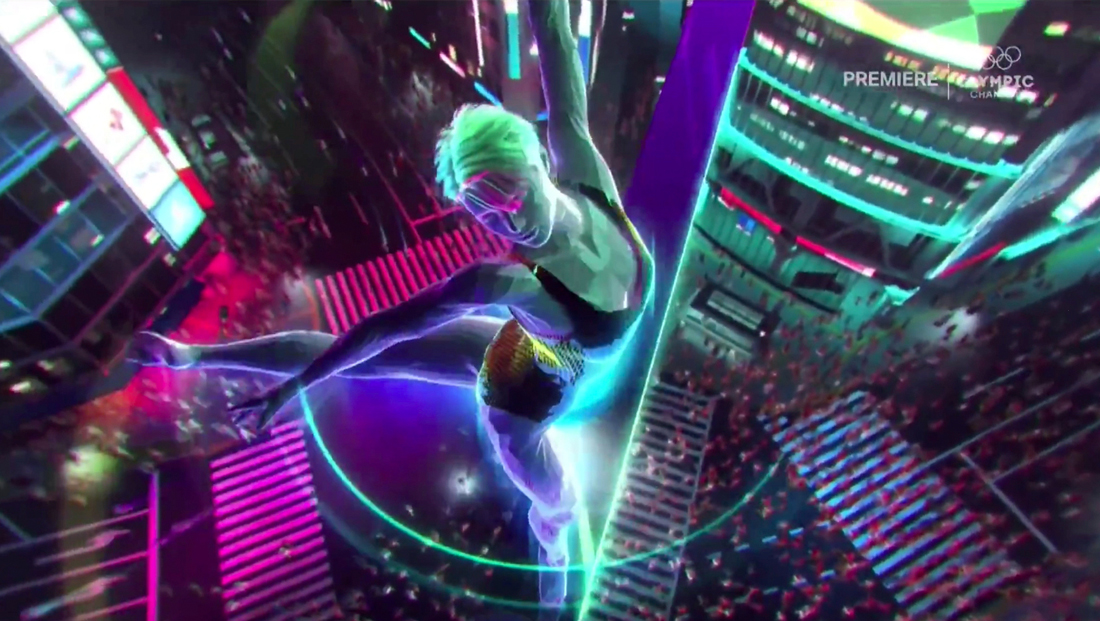 The Olympic Broadcasting Services, or OBS, which provides video feeds of events to broadcasters around the world, has updated the insert graphics it uses to showcase standings, ranks, times and other data and information.

The latest iteration of the graphics, introduced during the delayed 2020 Summer Olympics in Tokyo in July and August 2021, introduces a flatter motif with a green color palette.

OBS also produced an animated open that is shown at the start of select feeds which broadcasters can choose to air or replace.

Some networks, including NBC in the U.S., typically don’t air this feed, though it does appear frequently on the U.S. version of the Olympic Channel, a joint venture between the IOC and NBCUniversal.

As with previous years, the open features a blend of cultural and historical references to the host country along with animated depictions of athletes.

For Tokyo, a driving theme is that of a vibrant, active city — with many of the athletes depicted using the tops of skyscrapers as “arenas.” 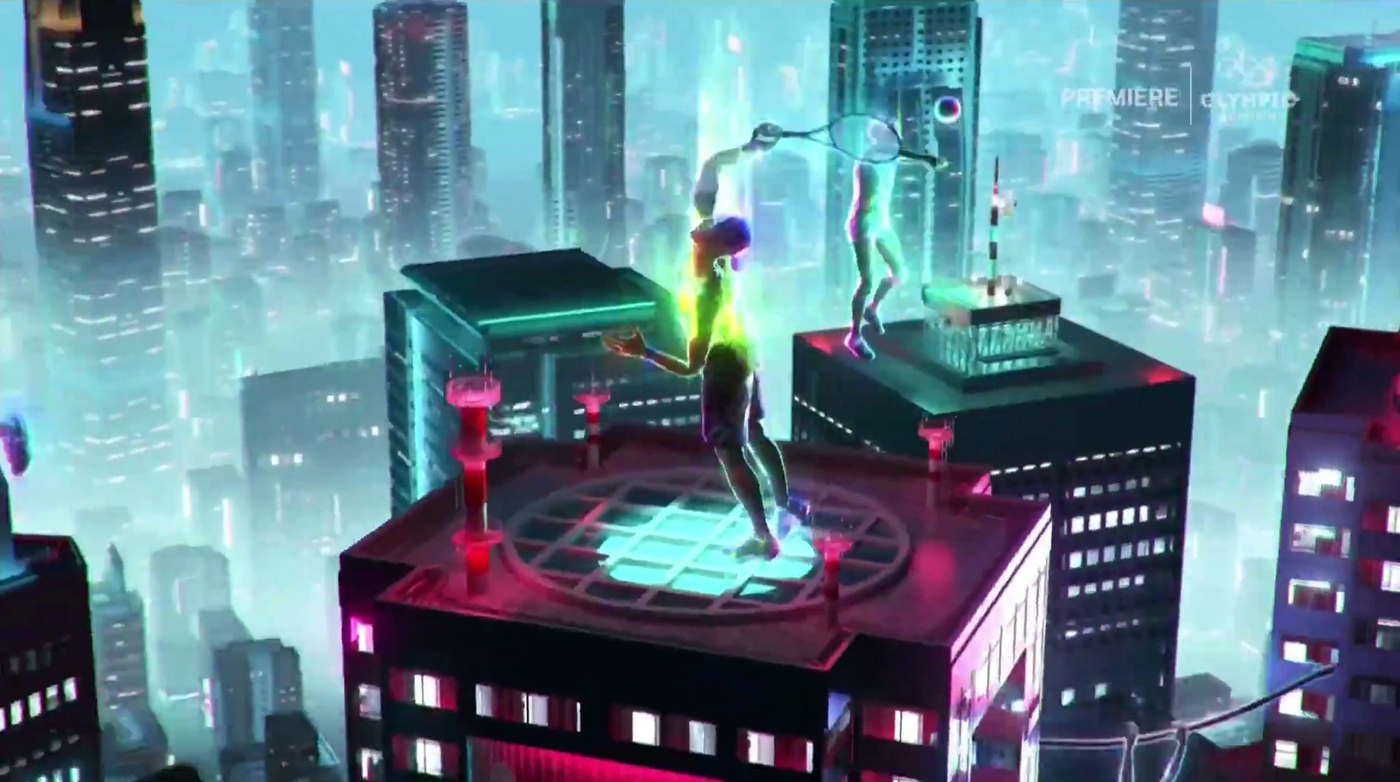 There’s a nod to smartphones in the form of a passenger watching a streaming event on his or her phone, while athletes are also shown scaling the sides of buildings that then morph into swimming pools on top.

Both rural Japan and metropolitan Tokyo are also showcased, including a traditional torii gate, and the open ends with a wide view of the Olympic stadium with Mount Fuji in the background. 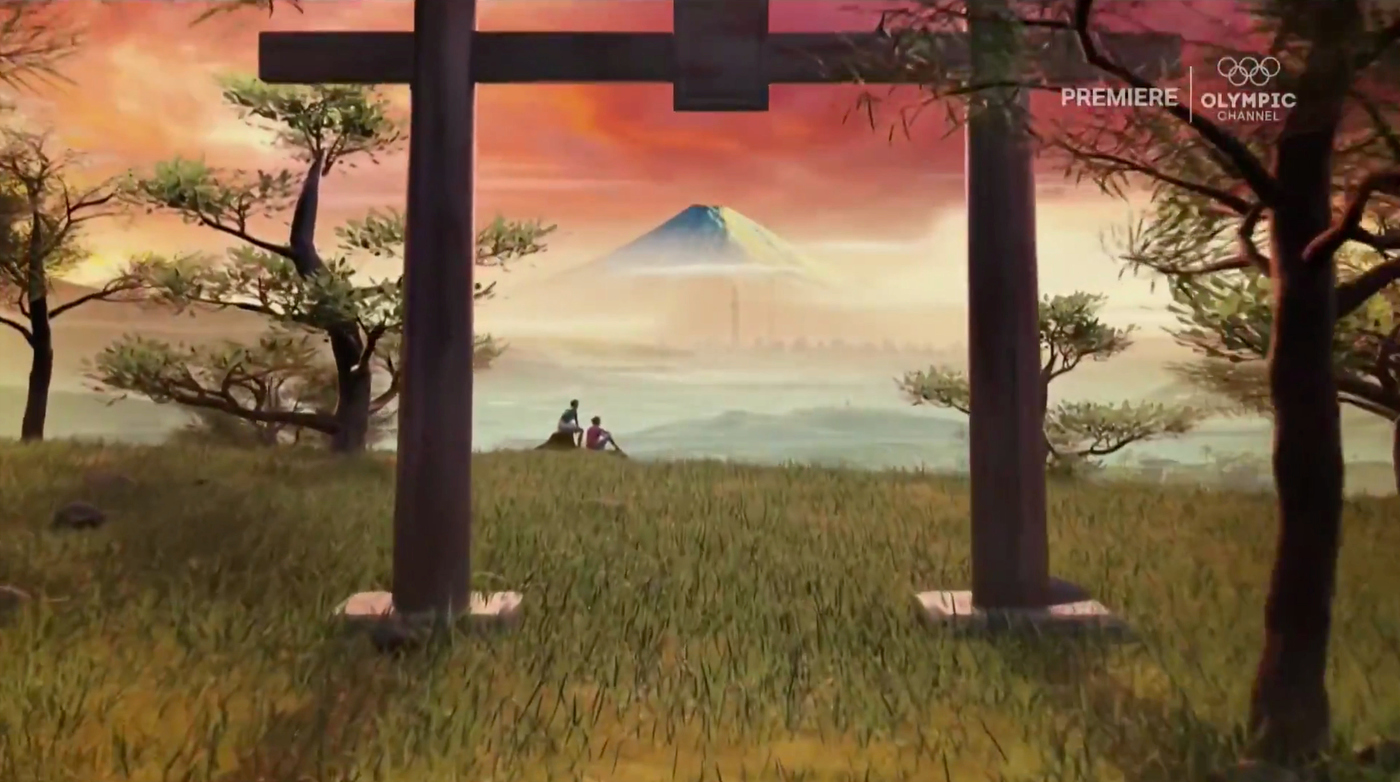 There are various versions of the open, including shorter ones, as well as ones that include the OBS logo in the sky above Fuji. In other instances, it is fed blank so that rights-holding broadcasters, or RHBs, can insert their own logos in the space.

Other clips use a similar look to the open to provide slow-motion 3D depictions of athletes performing, often with micro text and labels mixed in to illustrate angles and other data. 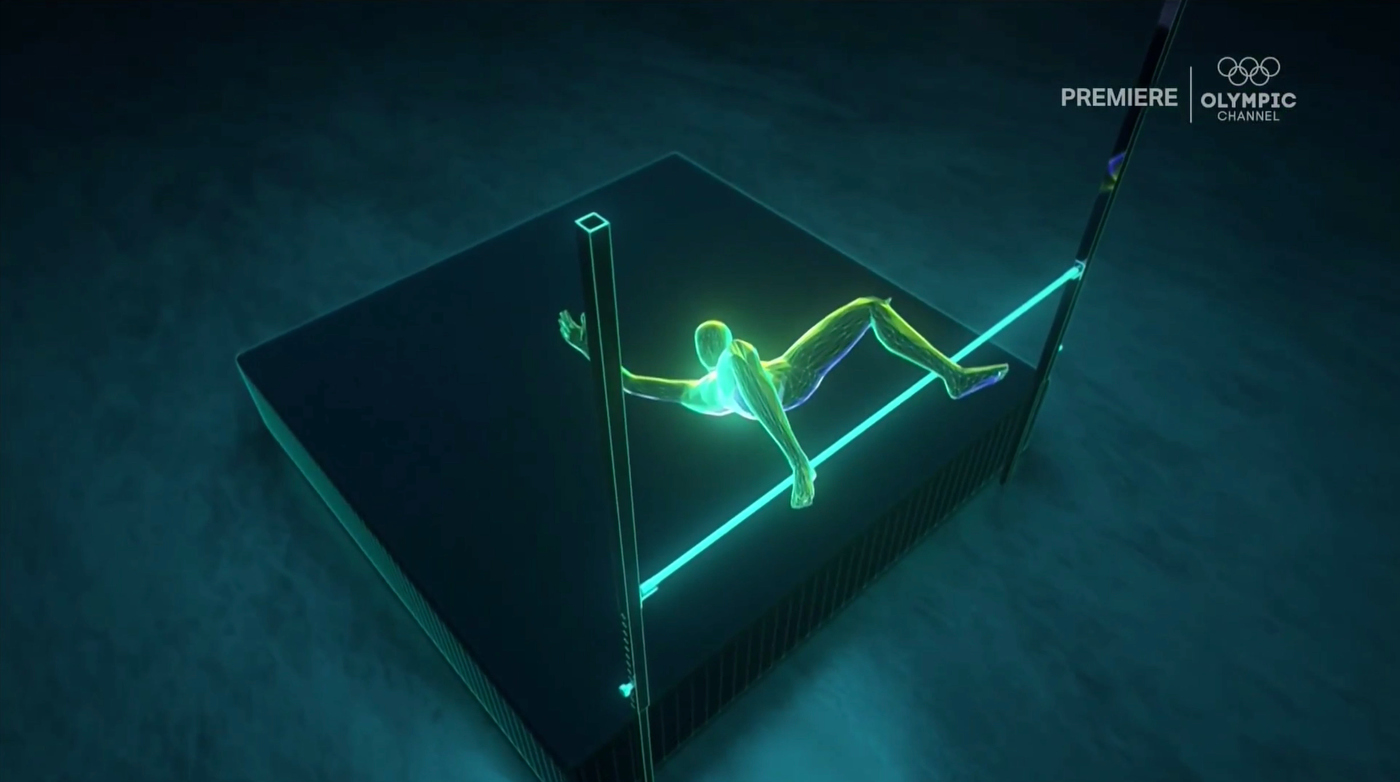 There are also segment stingers included in select Olympic Channel feeds that use the same look and feel, airing during the news recap show. 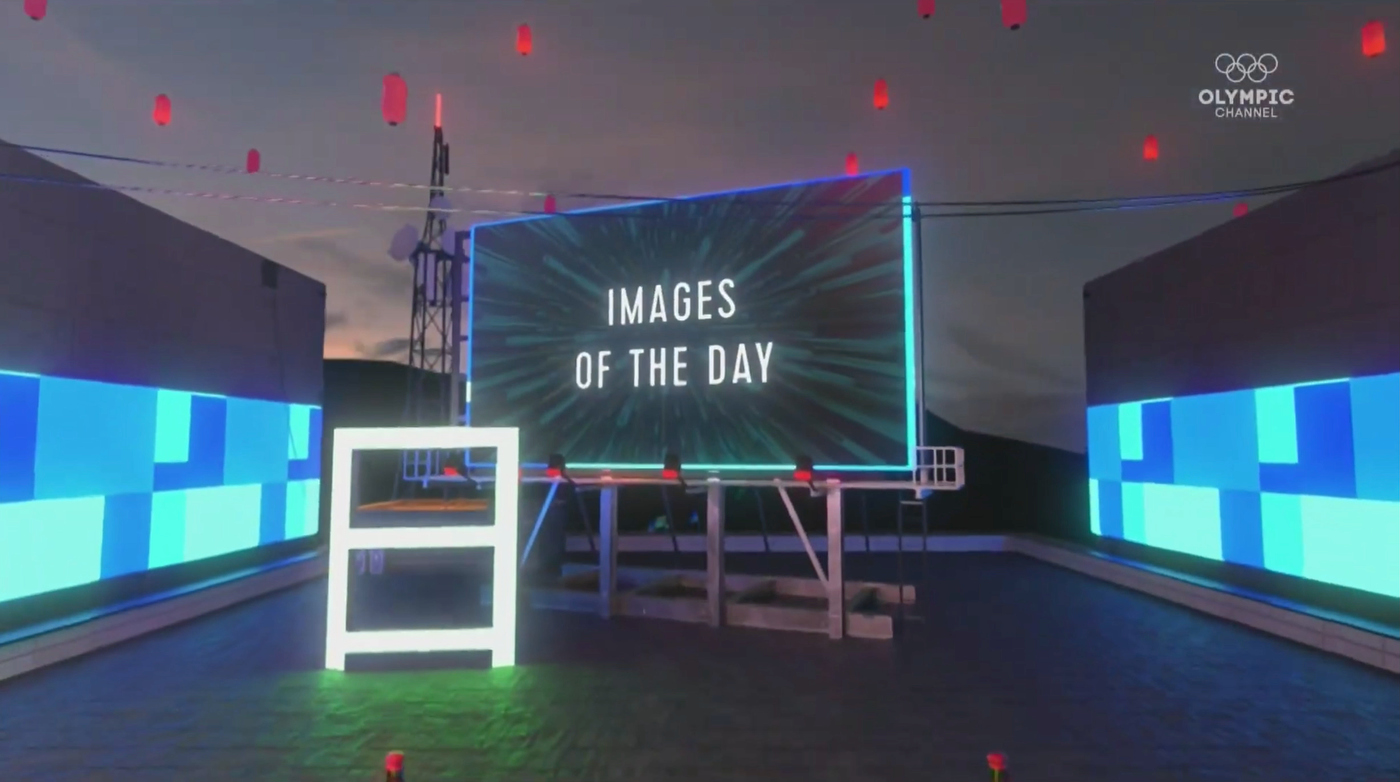 Neither the OBS nor IOC responded to a request for the project credits so the individuals involved could be credited. 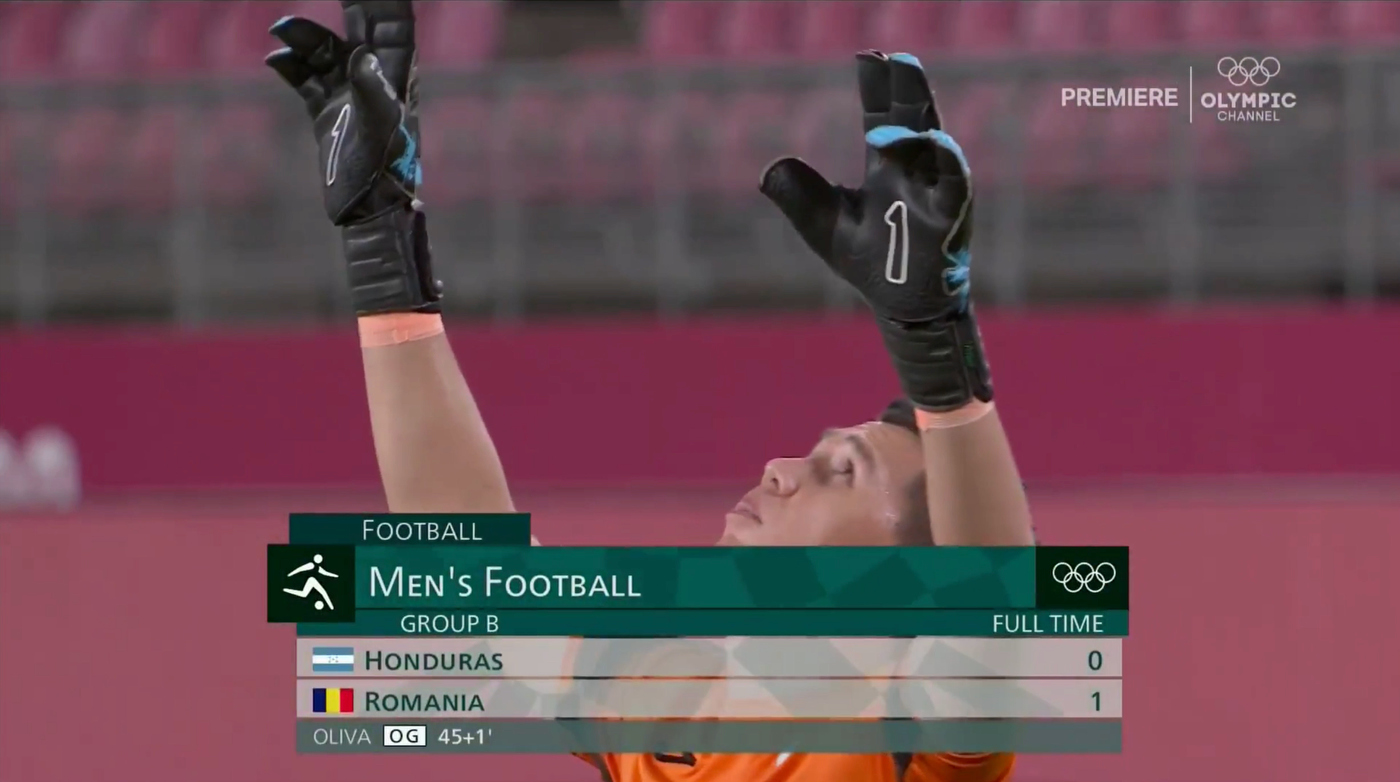 The graphics used during actual events include redesigned lower third style insert graphics along with a variety of other layouts that can accommodate everything from player stats to leader and ranking boards, scores and timers.

These graphics have made the transition to a flat design dominated by greens and semitransparent white.

The new design also transitions to the typeface Frutiger and continues the OBS practice of using small caps, but stops showing text in italics. 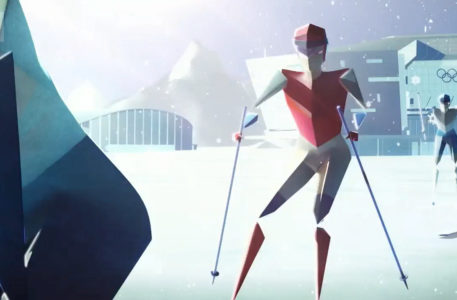 That transition is aligned with the more rectangular look to the graphics after several years of using curved or angled boxes in the graphics package, including in Rio and PyeongChang. 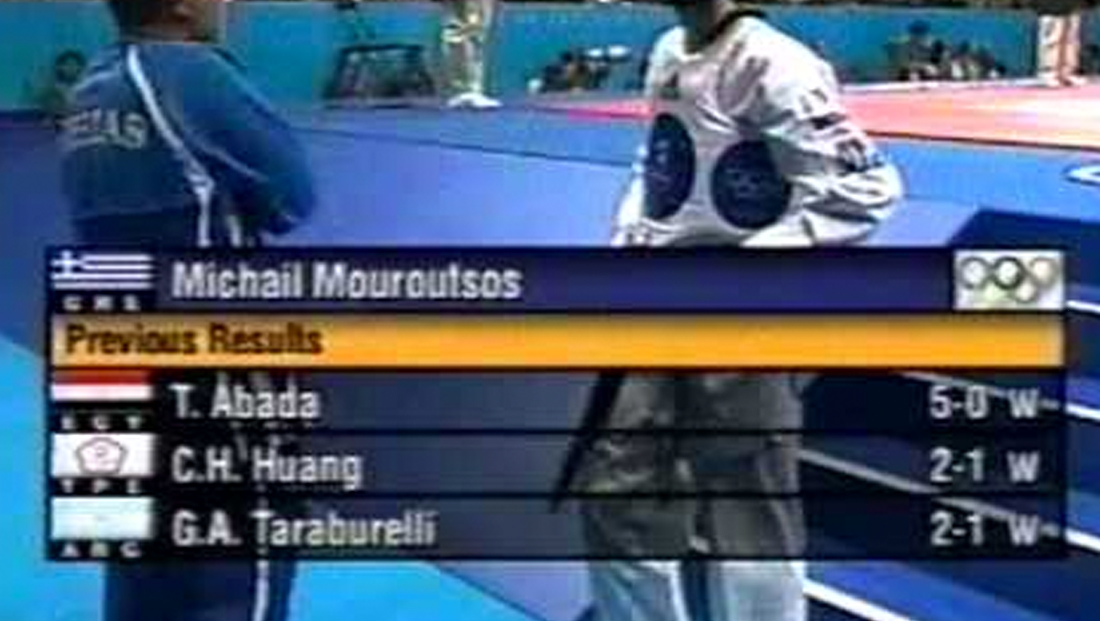 A sample from the very boxy look the OBS used for several years; this one from 2000.

If one digs farther back in Olympics history, OBS used extremely boxy graphics, complete with thick black outlines, for many years.

For Tokyo, the boxy pattern from the city’s Olympic logo (which is typically distinct from the ones developed by broadcasters) is used as a background element in many of the insert graphics as well as fullscreens. 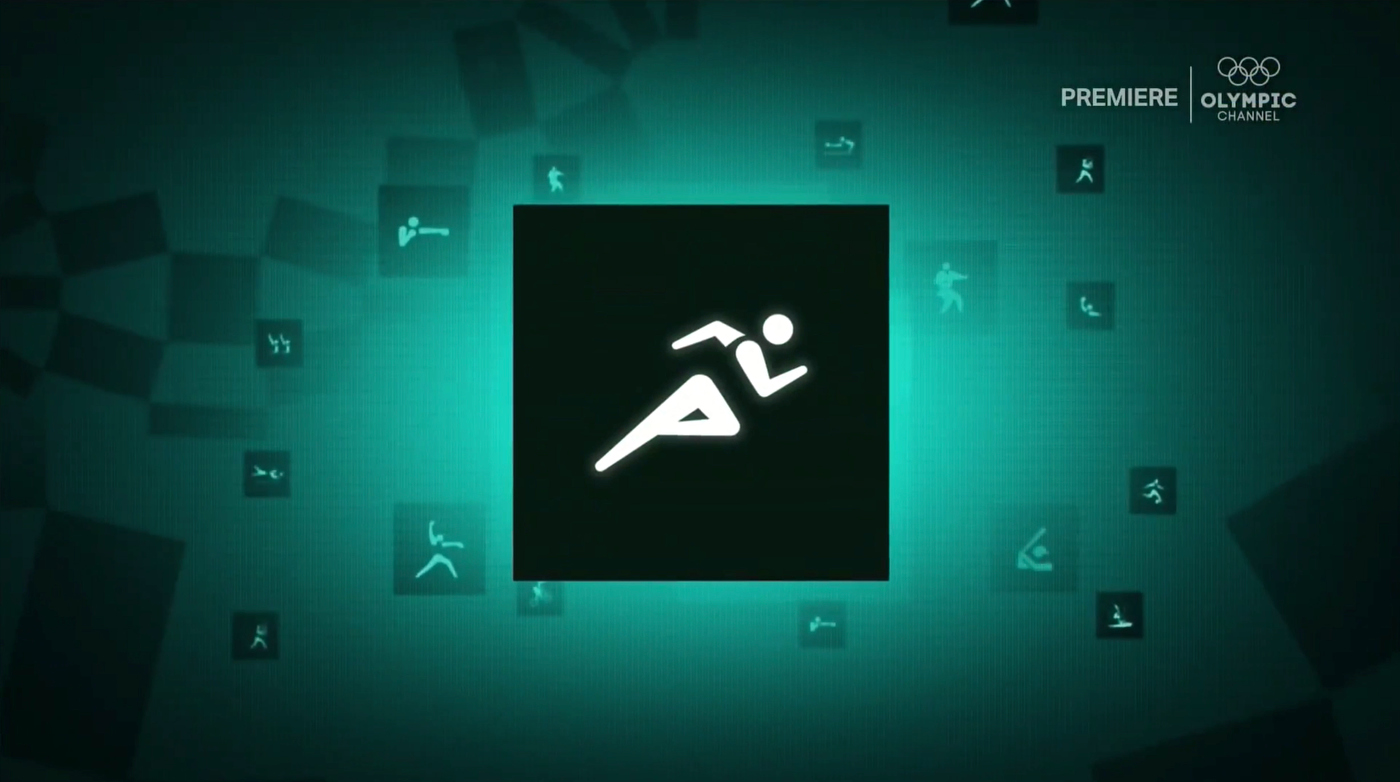 OBS has, like other broadcasters, developed a variety of animation around the pictograms that represent each event, a practice that was started when Tokyo last hosted the games in 1964 as a way to illustrate competitions without words.

The pictograms even got their own segment in the opening ceremony, with human actors recreating the designs.

In addition to dark green backgrounds, there are also lighter stingers for the various events that introduce some additional colors, such as blue and gold, and animated out using a multifaceted image that forms the outline of an Olympic ring with the slope of Fuji, a ring of cherry blossoms and animated ring elements.

The OBS insert graphics appear on most networks with broadcast rights to the Olympics around the world. Because it would be duplicative and expensive to send the separate cameras and production teams to run the dynamic graphics needed for sporting events, the OBS created this “pool” arrangement.

Some networks, including NBC, are contracted by OBS to provide crews on the ground at venues, but the resulting feeds are shared with all RHBs.