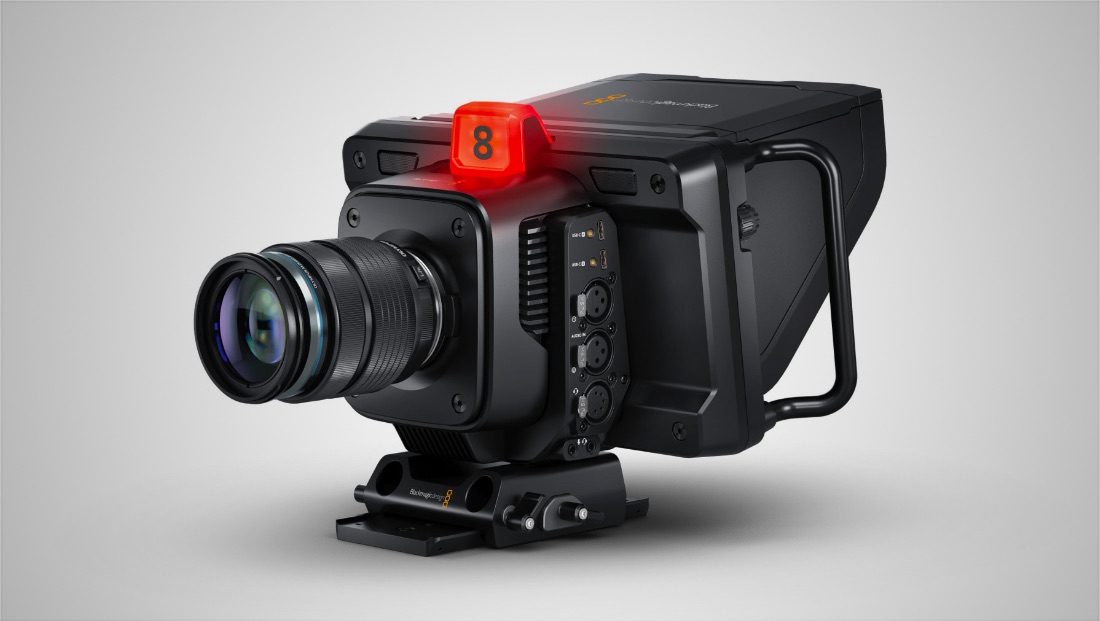 With an MSRP from $1,295, the cameras are designed for live production environments and are configurable with a variety of options and upgrades.

Blackmagic Studio Cameras have the same features as large studio cameras, miniaturized into a single compact and portable design.

While Blackmagic Studio Camera is designed for live production, it’s not limited to use with a live switcher. It can also record Blackmagic RAW to USB disks.

The Blackmagic Studio Camera 4K Pro model has SDI connections that include talkback so the switcher operator can communicate with cameras during live events. That means the director can talk to the camera operators to guide shot selection, eliminating the problem where all cameras could have the same shot, at the same time. The talkback connector is built into the side of the camera and supports standard 5 pin XLR broadcast headsets.

Blackmagic Studio cameras have lots of connections for connecting to both consumer and broadcast equipment. All models feature HDMI with tally, camera control and record trigger, so are perfect for ATEM Mini switchers. Customers also get headphone and mic connections, and 2 USB-C expansion ports. The advanced Blackmagic Studio Camera 4K Pro model is designed for broadcast workflows so has 12G-SDI, 10GBASE-T Ethernet, talkback and balanced XLR audio inputs. The 10G Ethernet allows all video, tally, talkback and camera power via a single connection, so setup is much faster. That’s just like a SMPTE fiber workflow, but using standard Category 6A copper Ethernet cable so it’s much lower cost.

The Blackmagic Studio Camera features a high speed USB-C expansion port that allows customers to record to external disks or connect to a wide range of accessories. Plug in an external USB flash disk and the camera can record high quality 12-bit Blackmagic RAW files for later editing and color correction. That means customers can just move the disk to a computer to work, and customers don’t need to waste time with file copying. Plus the USB port will power any phone or disk that’s plugged in.

Some file formats such as H.264 are highly compressed, so add noise and artifacts, causing sensor detail to be lost forever. Blackmagic RAW eliminates this problem so customers get stunning images with incredible detail and rich color throughout the whole post production pipeline. Blackmagic RAW also saves camera settings as metadata so customers can change ISO, white balance and exposure later in DaVinci Resolve. Plus the files are small and fast, so editing responsiveness is incredible.