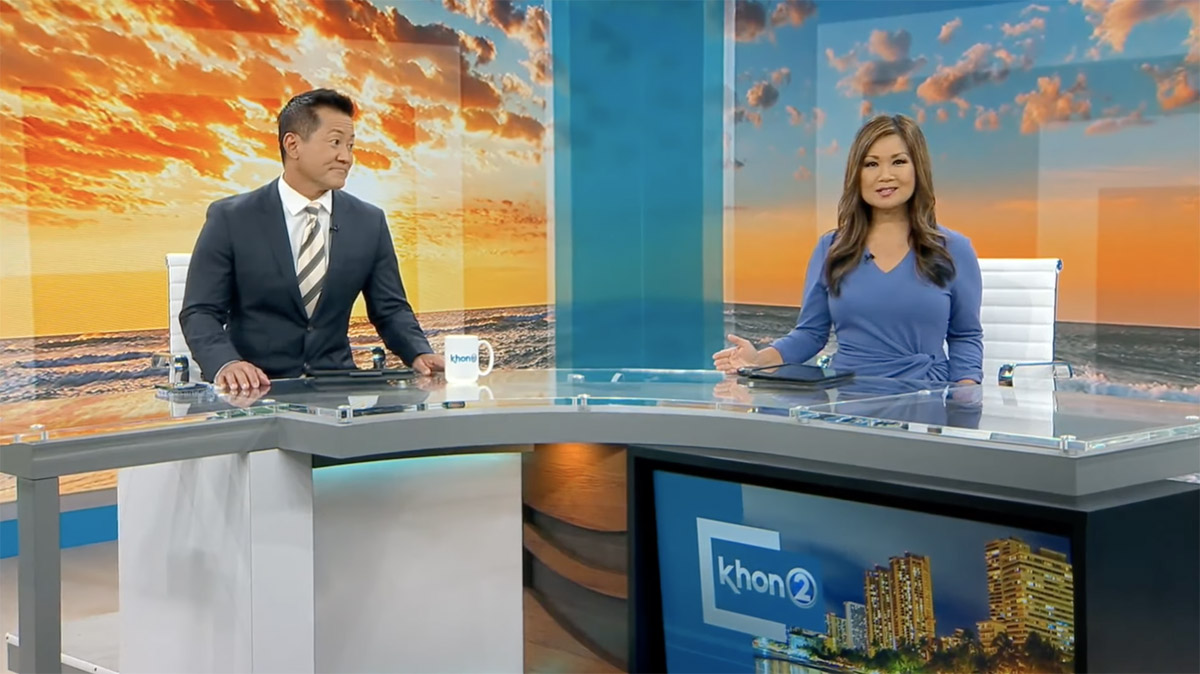 When preparing to install LED video panels in a broadcast studio, there are numerous details to take into consideration — right down to how to prevent the dreaded moiré effect from ruining the stunning images these displays showcase.

The issue of moiré is rooted in pixel pitch, or the size of the individual diodes used in the manufacturing of a video panel that each display a single pixel of whatever is being shown on the screen, notes Charles Markovits, national sales manager at Neoti.

In general, the larger the individual light emitting diodes, or LEDs, are, the less expensive the product is. However, as this measurement (known as pixel pitch) increases, then talent needs to sit farther away from the video panels to avoid pesky “rippling” moiré patterns, as Markovits describes them, which tend to create distracting “banding” or “vibrating” effects in video.

Larger pixel pitches are common for applications such as billboards, outdoor signage or even corporate events because they tend to be viewed from far away, but most studio applications call for talent and cameras to be much closer together — meaning pixel pitch must be much smaller to avoid moiré. 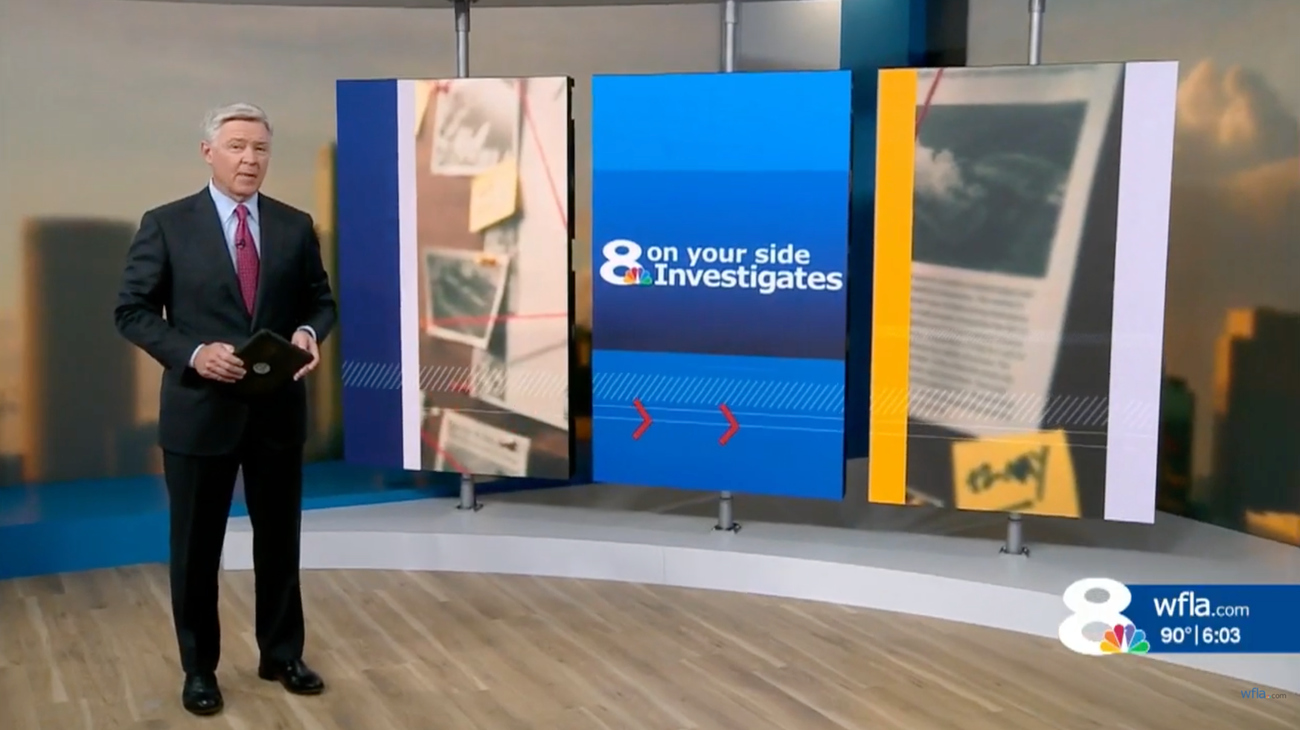 A common pixel pitch for LED studio video walls is 1.5 millimeters. At this range, talent can generally be positioned three to five feet in front of the video wall to avoid moiré. If you bump up the resolution and go with a 1.2 millimeter product, talent can be as little as two to four feet from the video panels, making it ideal for tight studio installations or for video walls where talent may need to interact directly with the wall.

Going the opposite direction, to a slightly larger 1.8 millimeter LED product, requires five to eight feet between talent and LED panels, so it’s worth noting how much even a fraction of a millimeter, either way, can affect where talent can be positioned.

All of these measurements can vary slightly based on a variety of factors, including the camera’s shutter speed and studio lighting conditions, notes Markovits. There are also numerous points along the production workflow that should be carefully considered to ensure everything is optimized to prevent moiré, such as how graphics are designed.

For most clients, Markovits says 1.5 millimeters appears to be the “sweet spot” at this time to get a good balance between affordability and quality video output. 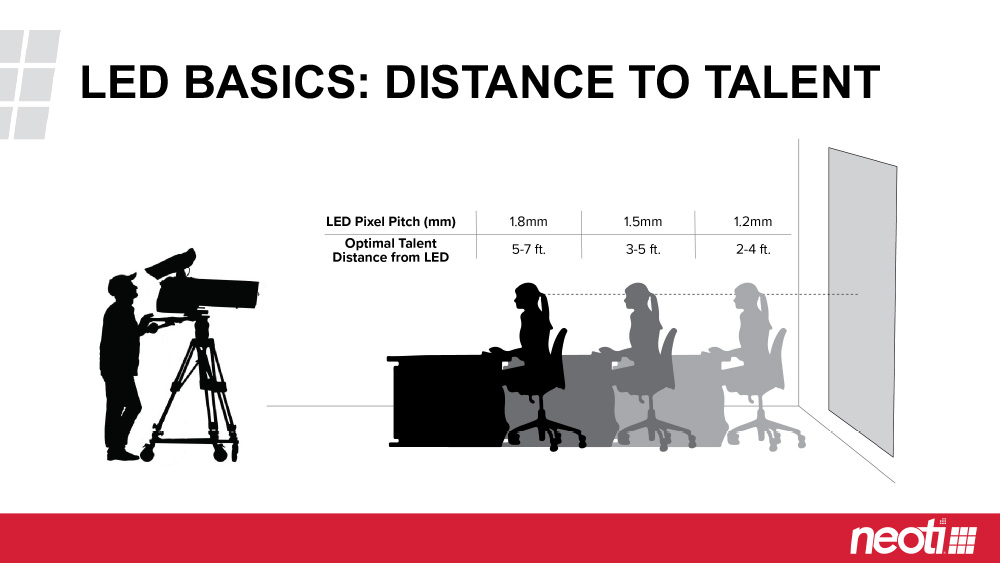 Selecting larger pixel pitches can be a way to save money, but it also ultimately creates a domino effect of sorts that typically requires larger sets while also potentially increasing the need for more LED panels and hard scenic elements to get the desired look, which could ultimately have an effect on the budget (or require a set too large to fit in the studio).

While Neoti can work closely with set designers and integrators before set design even begins, pixel pitch also becomes a consideration when Neoti is brought in to retrofit an existing set with video wall technology — especially if the budget prevents sourcing higher resolution LED.

It might seem that an easy solution would be to just move the anchor desk or position talent differently, but since the set and studio likely weren’t designed with those positions in mind, that’s typically not a viable option and broadcasters may have to explore a higher quality product, according to Markovits’ experience.

Ultimately, the goal of any video wall should be clear, crisp pictures behind talent to allow for enhanced storytelling, without any curved ripples or vibrations that detract from the image on the screen.

Not only can these create an unsightly and annoying look, but they can also interfere with viewers’ ability to read text on the screen or make out what’s being shown.

Curved video wall installations are also becoming more popular, which adds another layer of complexity. With a curved display, different parts of the LED installation will be at different distances from the camera, requiring more collaboration between the set designer, display systems company and broadcaster to coordinate camera placement. 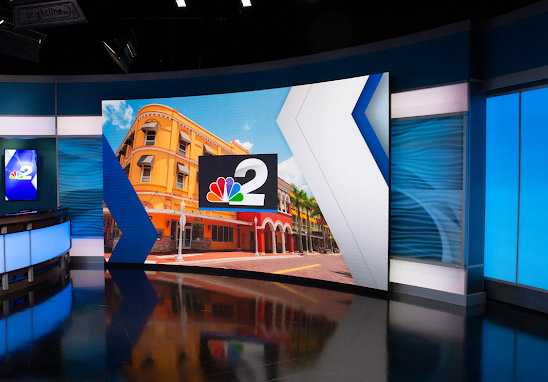 The set at WBBH was recently updated with a new curved LED wall from Neoti.

In many situations, positioning talent closer to video walls can allow for more dramatic blocking. It also gives anchors and reporters the ability to interact with the on screen images more naturally and ensure the image behind them remains well focused and clear.

Working alongside you and your partners

No matter what part of the studio LED video walls are used in, Neoti always approaches each project with a collaborative, solution-driven mindset no matter at what phase of the project they become involved.

While it’s obviously ideal to have the video wall supplier involved from even the pre-planning stages, Neoti always looks for ways to work with clients and designers to create a solution that looks great on air without inflating the cost of the project, including recommending products outside its own offerings.

During the pandemic, Neoti has been working with clients remotely to demonstrate different LED resolutions, including newer, UHD models that can reduce moiré even more while also delivering sharper-than-ever imagery.

Neoti can often direct broadcasters to a nearby installation the firm has completed to visit or even fly in actual panels for on site demonstrations and comparisons, all in the name of helping ensure clients get the best possible LED solution that works for both their budget and production needs.

Learn more about Neoti and overcoming moiré in the free white paper “How to Remove Moiré Patterns from LED Video Walls,” available for download here.