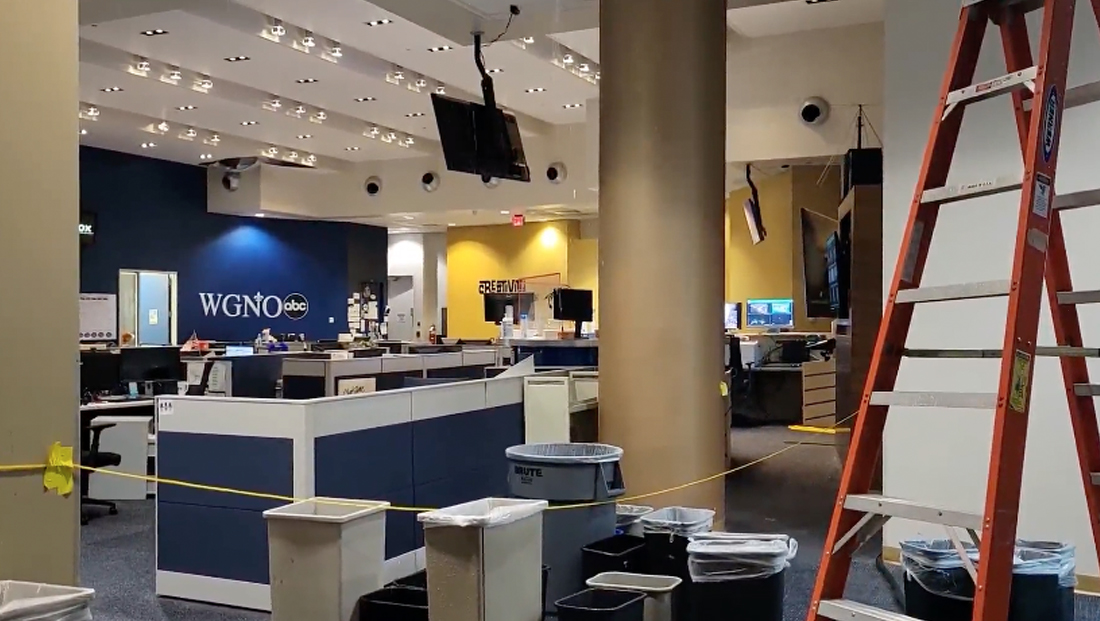 WGNO posted videos Sunday, Aug. 29, 2021 that showed flooding inside its newsroom and other parts of the station.

The station reported that ceiling tiles began falling due to the weight of pooling water above them.

Photos posted by the station show areas taped off and clusters of garbage and recycling cans being used to gather water.

Later, staffers posted to social media that the control room had to be evacuated after the ceiling “peeled away.” It wasn’t immediately clear what happened to production of the station’s ongoing coverage, but most TV stations have the option to have a sister station in another market take over control remotely in events such as these.

The station reported that a portion of the roof of its building appears to have been blown off by heavy winds from Ida. This exposed the infrastructure of the building and lead to flooding and ceiling damage.

This is some of the damage around the Galleria following Hurricane Ida. The chunk of stucco missing is where @WGNOtv is. pic.twitter.com/fFnqyfEyPR

Later, exterior photos showed that exterior walls had also been peeled away — including around where WGNO is located.

The station also lost power, like most of the city of New Orleans and surrounding areas, but continued to broadcast on backup systems. A satellite dish was also damaged when it was hit from stray debris.

WGNO operates out the eighth floor of The Galleria, a 29-story building in Metairie, Louisiana. The station, however, is located in the lower “base” pedestal portion of the building that is wider than the tower above, meaning it doesn’t benefit from having structure directly above it.

The station has remained on the air and in its normal studio, as well as providing extensive on the ground coverage. No injuries have been reported at the station.

Like most TV stations, WGNO has extensive backup power systems for emergencies such as these. There is typically less that can be done in the event of water damage.

Other New Orleans stations, including WWL (CBS), WDSU (NBC) and WVUE (Fox) did not report any major damage to their facilities, but did have a variety of power issues.