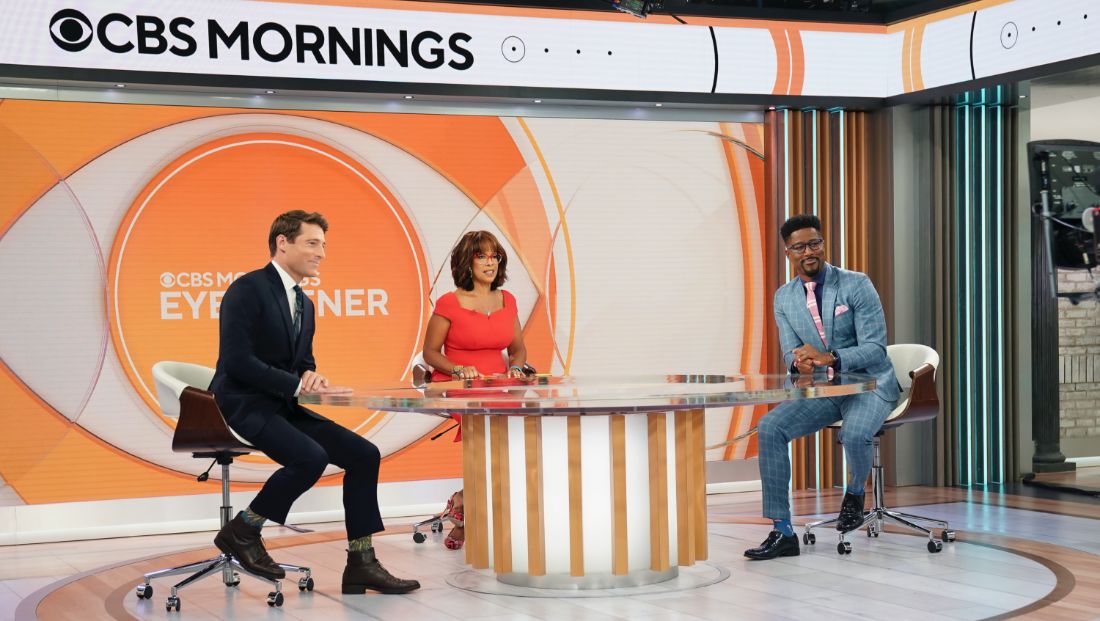 CBS News completed the transition to yet another chapter of its morning news offering — this time switching to another new anchor combo, studio location, theme music, graphics package and name.

At the end of August 2021, the network announced that its “CBS This Morning” newscast would become known as “CBS Mornings” come Sept. 7, 2021, and make other key changes to align it with its “Sunday Morning” show including taking on that program’s iconic sun logo and trumpet fanfare musical signature. The network tried something similar in the 1980s.

At the same time, Nate Burleson debuted as the third co-anchor, alongside existing co-anchors Gayle King and Tony Dokupil and the show moved to what’s been dubbed Studio 1515 in Times Square.

The “1515” is in reference to the street address of 1515 Broadway that designates One Astor Place, the headquarters of ViacomCBS that houses the studio space.

The studio, located on the second level of the building, features pieces recycled from the set installed in the same space for 2020 election coverage and is the former home of MTV’s “Total Request Live.”

While that set has more metallics, red, white and blue, the network updated the look by recladding some columns in wood tones and bringing in anchor desks and furniture with a softer look.

Home base features a circular anchor desk, which has become a trademark for the show, while a smaller, standing height version can also be used.

There are also stylish new white and black highboy chairs for both the hosts and reporter debriefs or, presumably, in-studio guests. 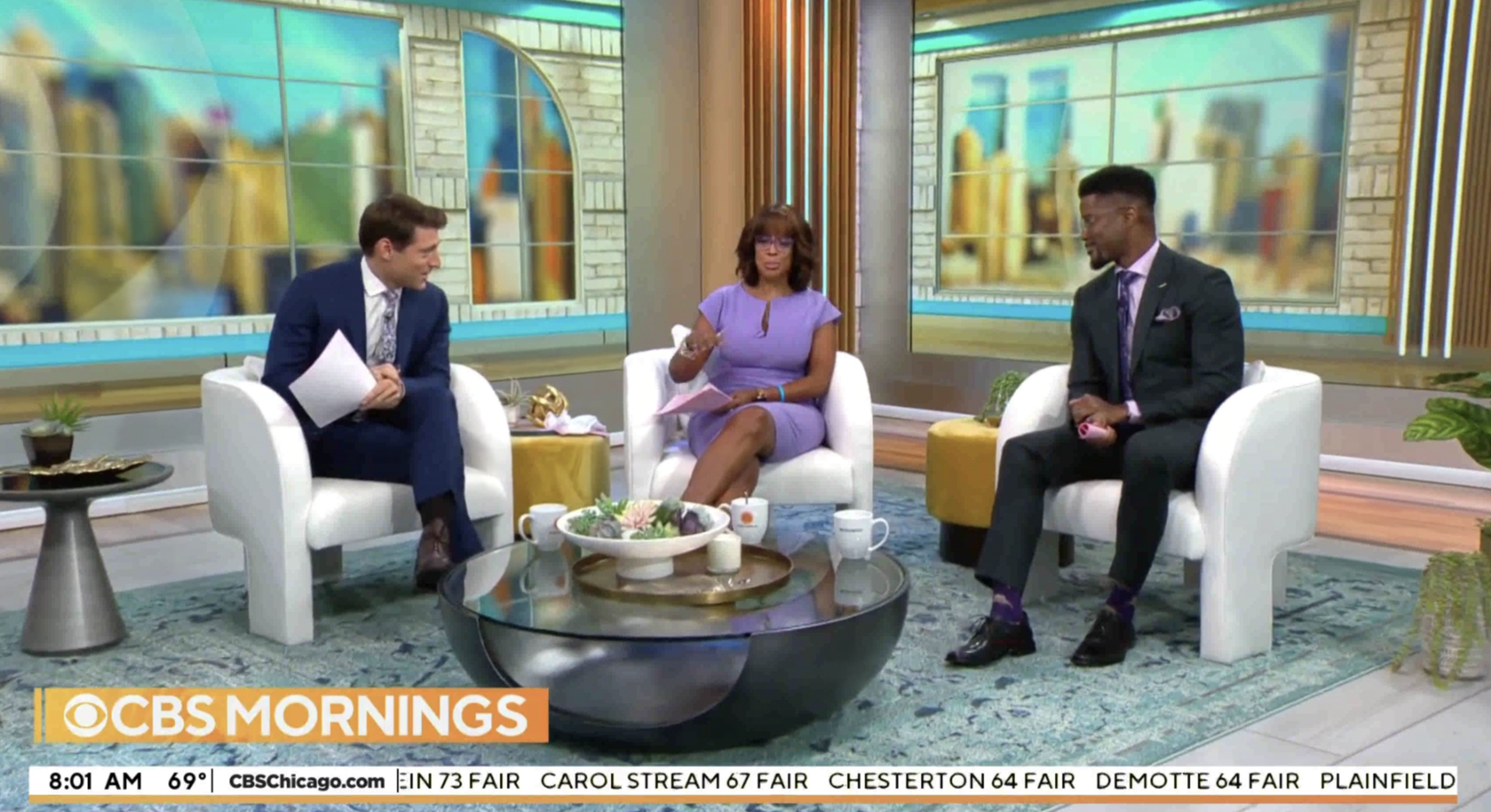 Sofa and armchair setups can also be used, something that wasn’t prominent in Studio 57 at the CBS Broadcast Center on West 57th Street. 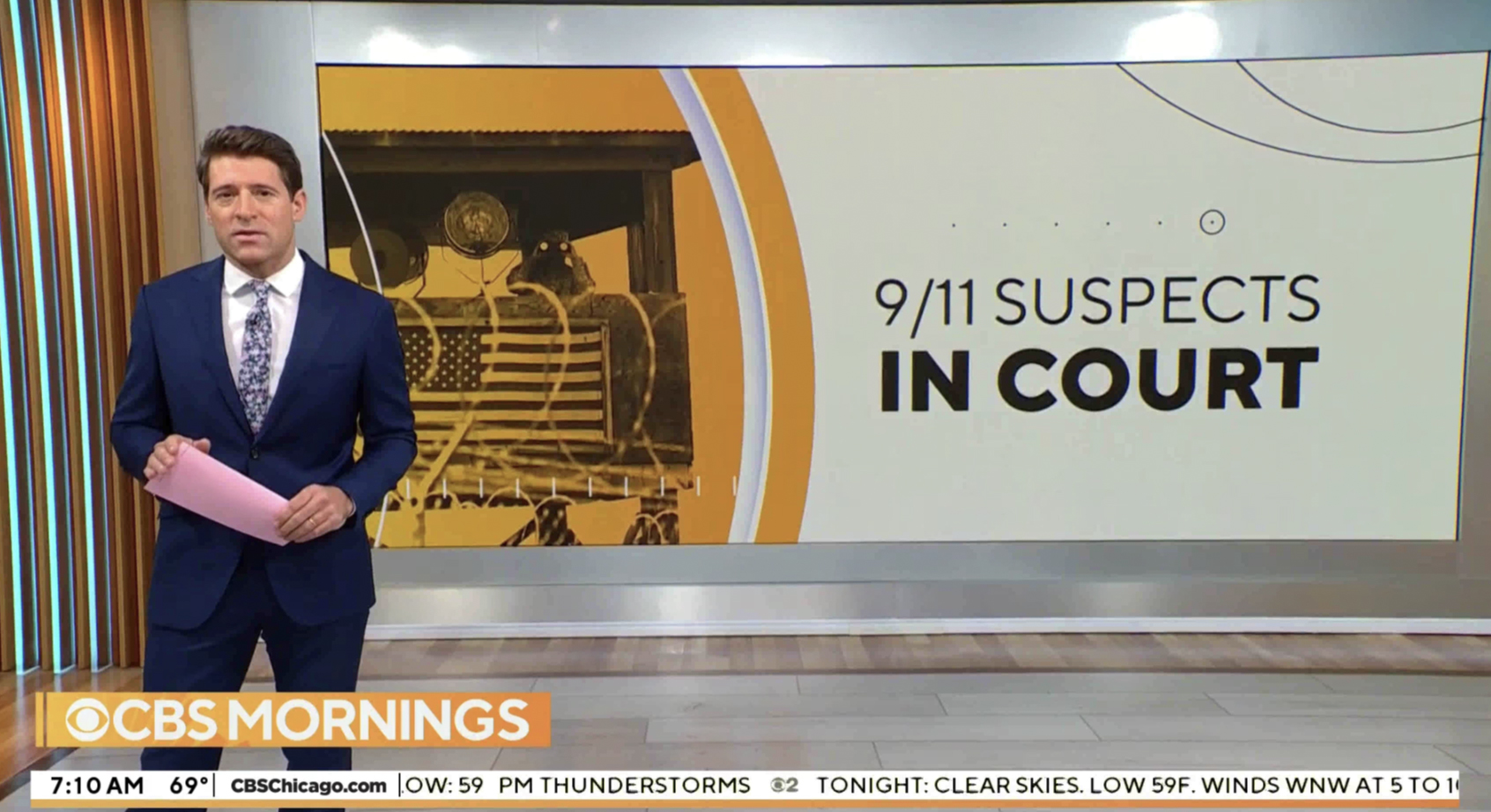 On the debut edition, the network used the camera left alcove, which was used mainly for exit polling segments during the election, as a hard news standup area in the 7 a.m. eastern hour and later as a less formal living room style arrangement. The look was driven home by its large, glass pendant lighting.

This was also where the hosts gathered around a smaller, circular table for the “Talk of the Table” segment. 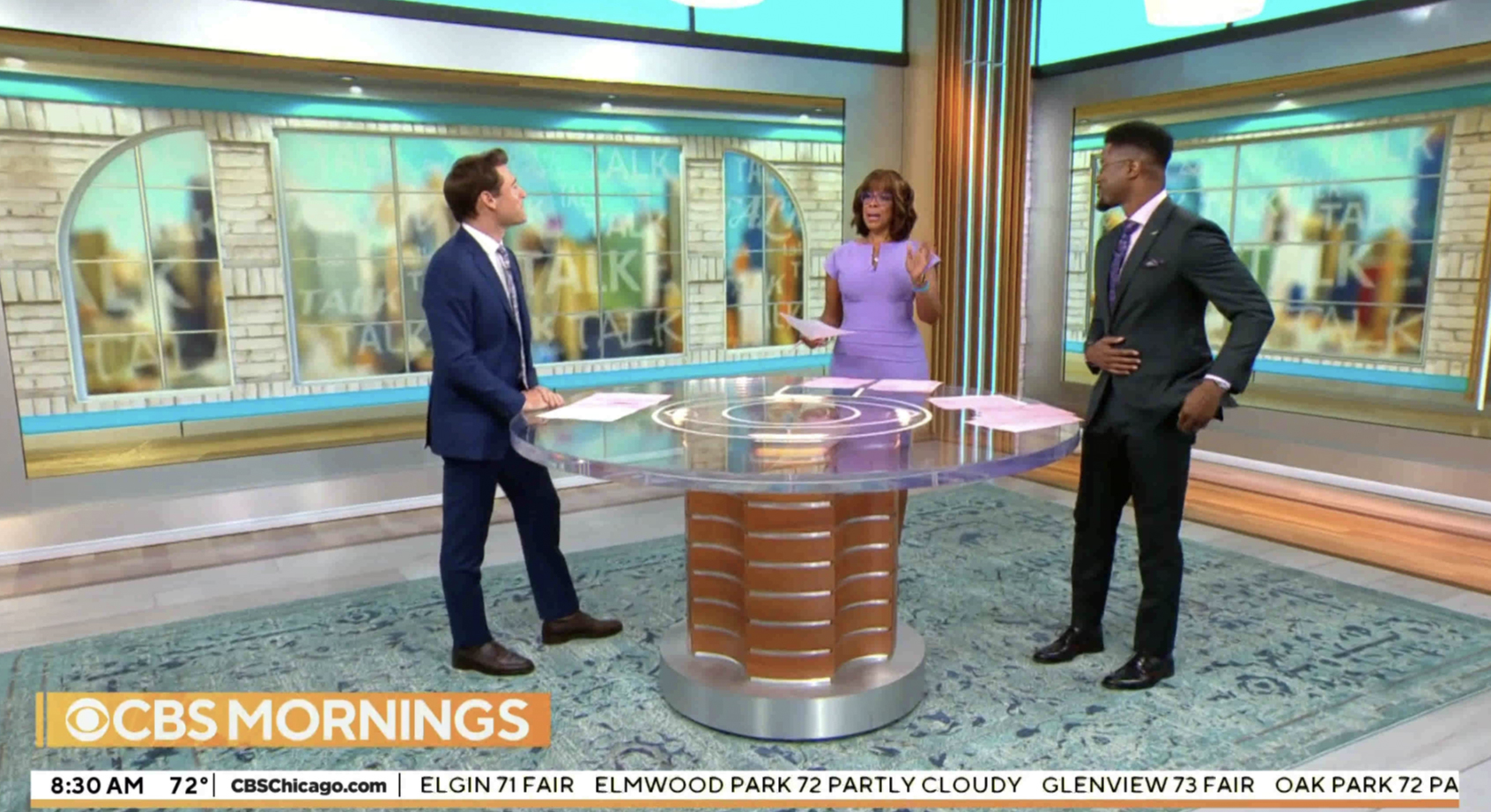 The camera left area set up for ‘Talk of the Table’ (the table in the center is new and is, in many ways, a small version of the one originally designed for Studio 57. The exposed brick ‘windows’ with ‘Talk of the Table’ branding are not real, but rather virtual set extension graphics fed to the video walls.

Meanwhile, the area camera right, which has been updated with faux whitewashed exposed brick and open shelving displaying decorative items, did double duty on Sept. 7, used both for standups and as a weather center. This included leveraging a freestanding touchscreen that could be integrated with the video wall behind, one feature of which was the presenter’s ability to swipe a graphic from the smaller panel to the larger LED display.

A smaller, similar portion of the shelving is also located as a sort of shoot-off wall on the opposite side of the space. 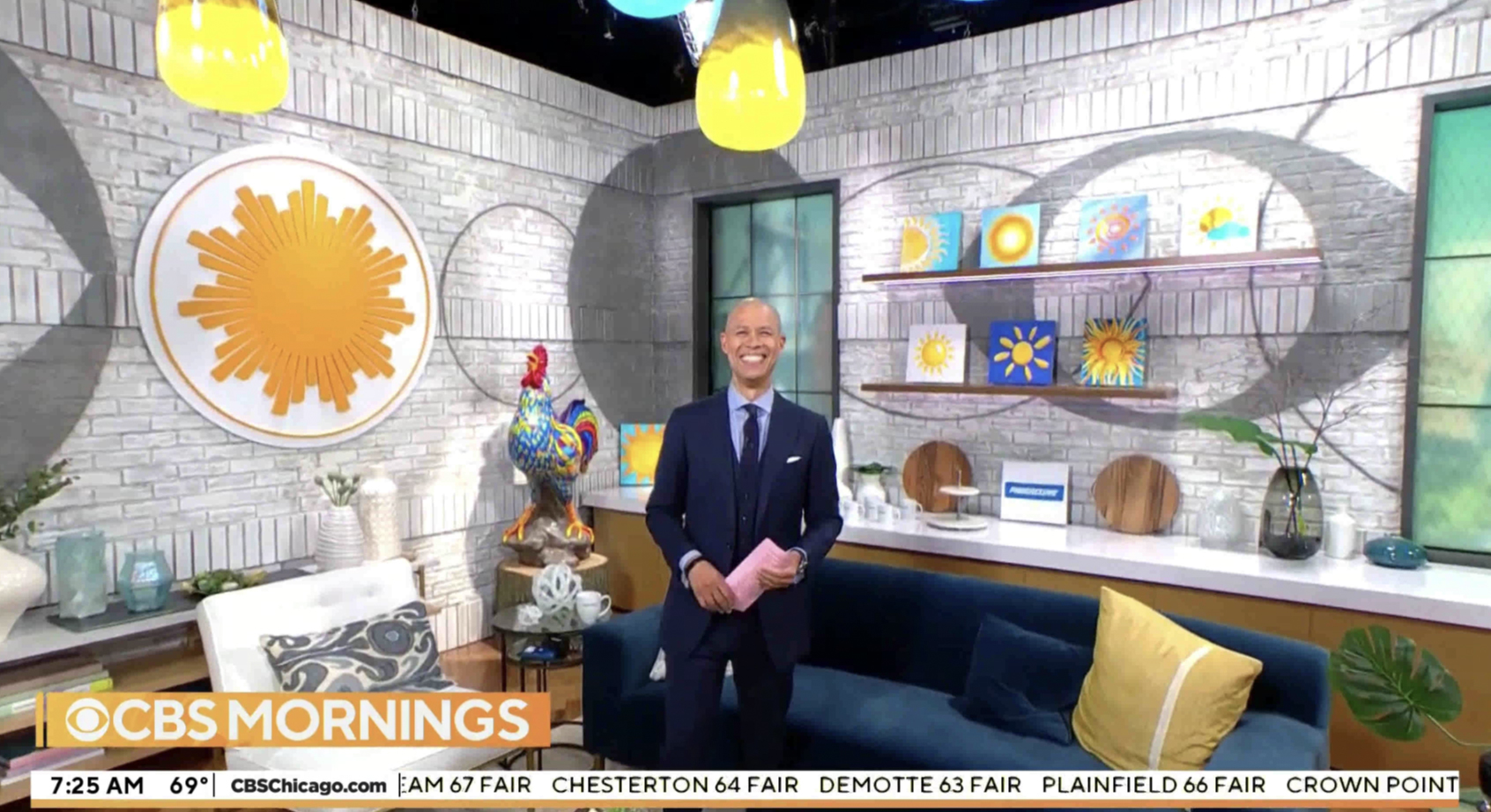 Directly opposite the main anchor area is a glassed green room, also in exposed brick, with portions of the CBS logo painted on.

In addition, there’s a large outline of the “Sunday Morning” eye and a small collection of paintings of suns. Where NBC uses a half-circle, CBS uses a full view of the sun, along with its distinctive rays and, in some cases, facial features. (NBC has also latched on to the sunrise branding to encourage viewers to submit sunrise photos.)

The green room has the practical use for guests and correspondents waiting to go on the air, but it was also used for the “What to Watch,” segment, hosted by Vladimir Duthiers.