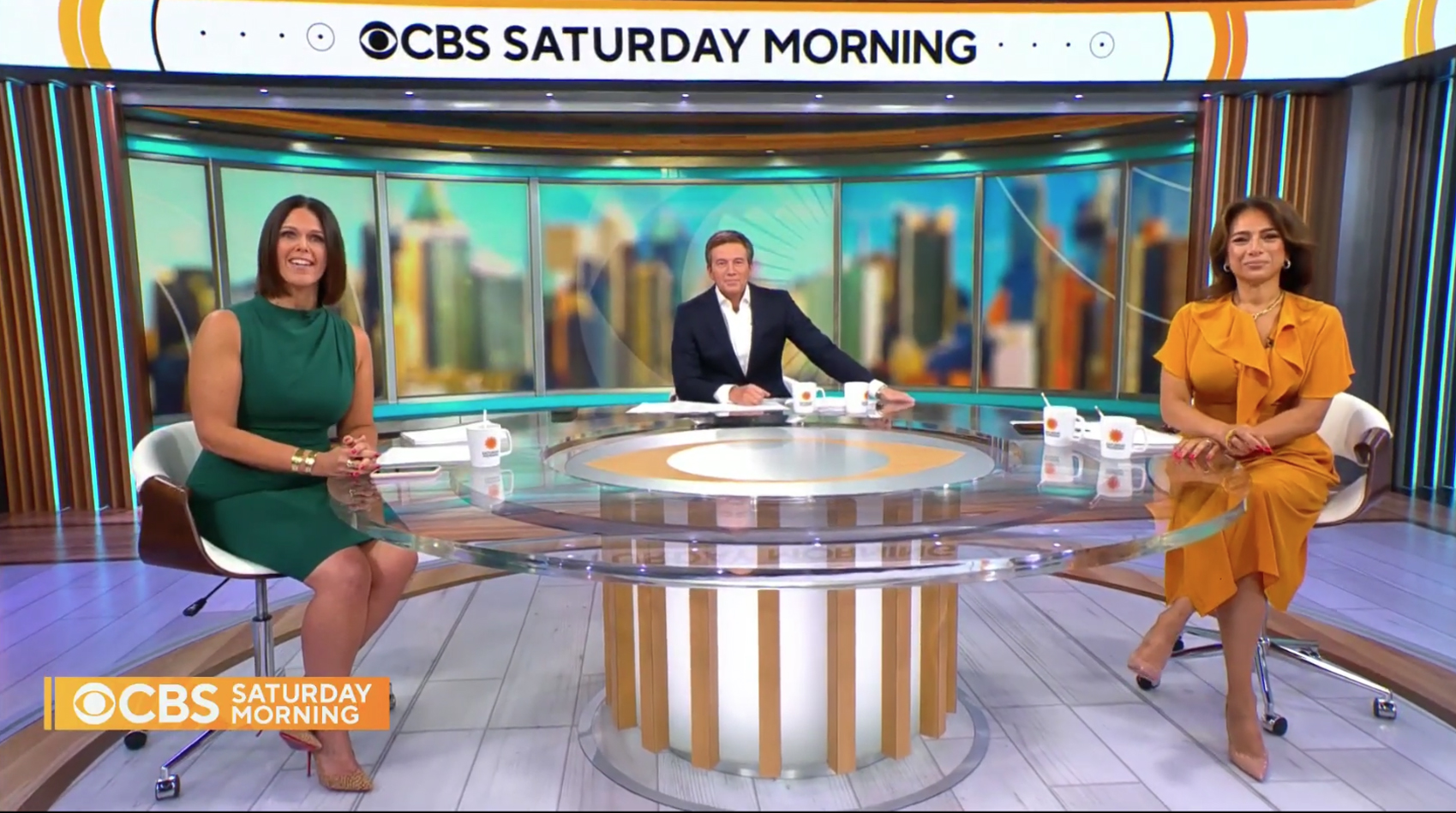 “CBS Saturday Morning” debuted Sept. 18, 2021, the making it the second CBS News program in recent weeks to rebrand, though it continued to “bury the lead” by not getting to it until about six minutes into the — though this did reveal some new graphical elements.

The Saturday show also did not, at that time, move to Times Square, remaining in its longtime Studio 57 home.

That all changed Sept. 18, though — with the show changing news, moving to Studio 1515 inside the ViacomCBS building and inheriting the “CBS Mornings” graphics. 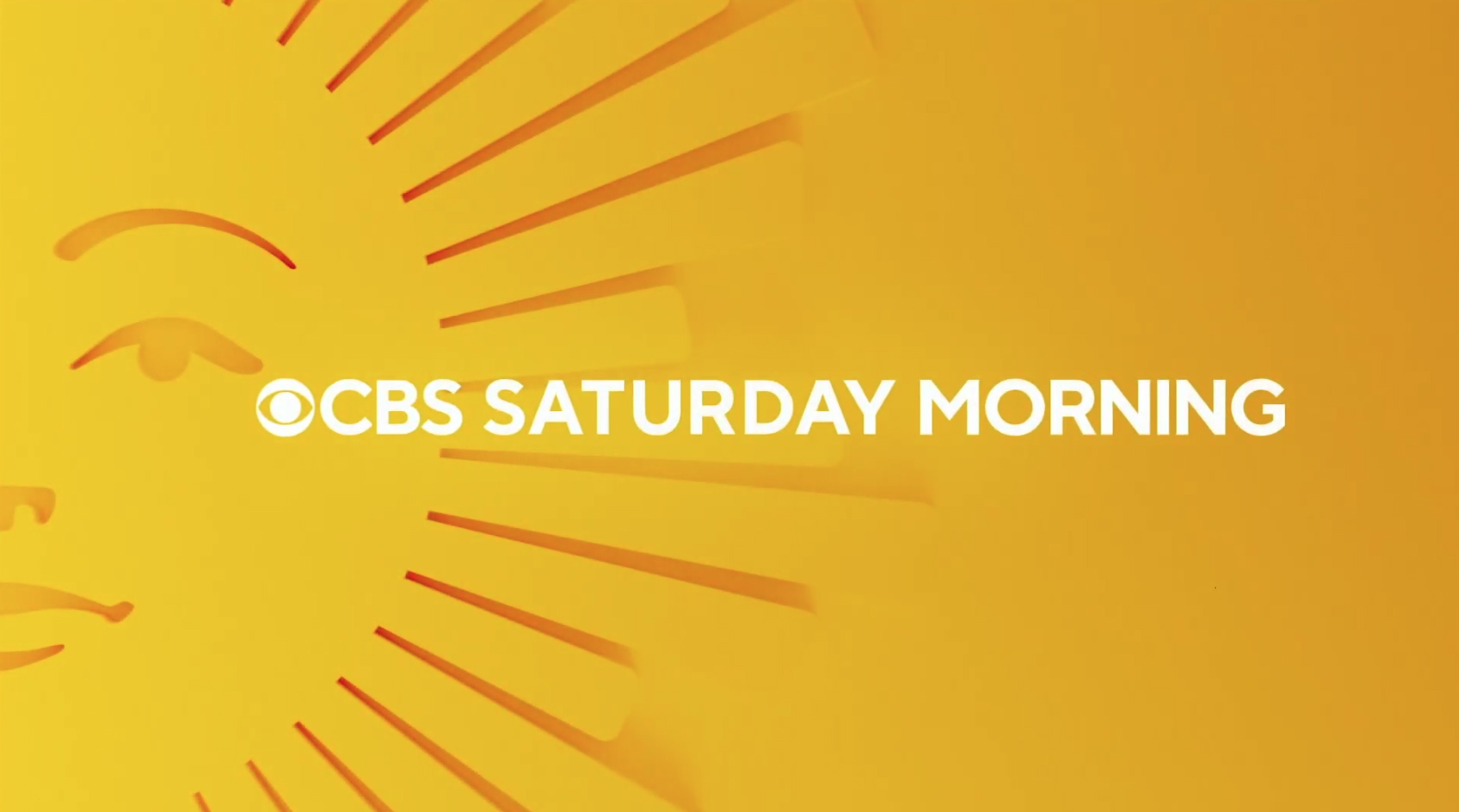 “Saturday Morning” also used a slightly different cut of the “Mornings” theme, which itself based on the longtime “Sunday Morning” theme. The Saturday cut had a slightly more “upbeat” feel and did not include the “warble” near the end of the brass solo.

“CBS Saturday Morning” continued to spend a rather unusually high amount of time basically promoting what was coming up.

All told, the show didn’t get to its top story into until nearly six minutes into the show — just like it has for some time.

The show started with a wide view of the new-to-it studio before cutting to a series of fullscreen “cutout” style teases that used the center of an oversized CBS eye shape to display a headline before shifting either to the negative space to the either the left or right, using the edge of the circular center and part of the outer “eyelid” as a “frame” for imagery along with a text banner accented with a series of dots and circle that moved across the screen, making a stop around each one.

When the tease with transition to another story, the graphic would shift back to the center with a new headline, then shift again to the opposite side, of the eye’s negative space. It would then alternate between the two.

That lasted about a minute and 40 seconds. 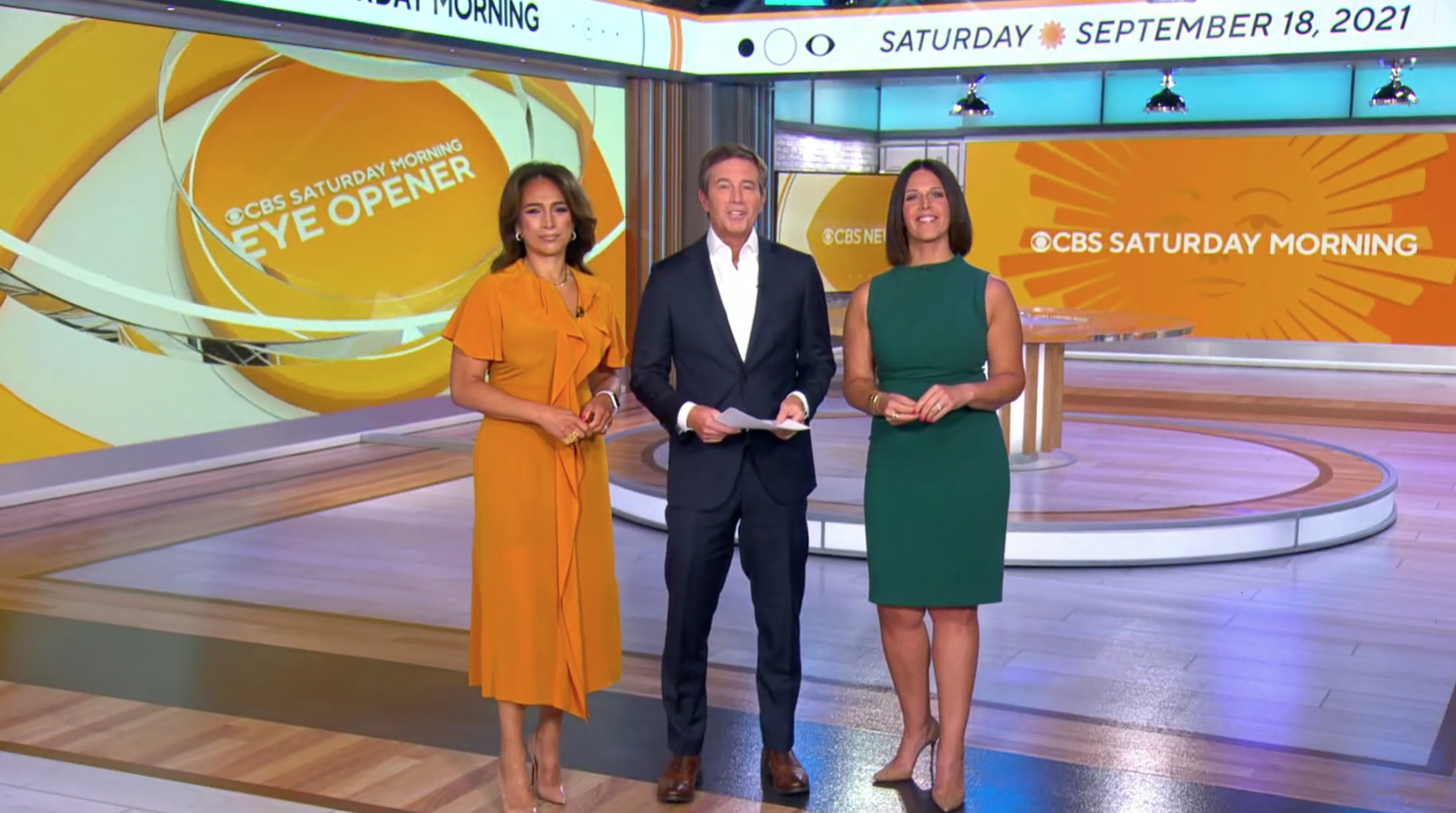 Up next was the “EyeOpener” news summary, which is timed at around 90 seconds. It did not feature the corner or light burst accented headlines like its weekday counterpart.

When “CBS Mornings” debuted Sept. 7, this segment felt more like a set of teases since the show eliminated its teases before the open, though it began to fell more like the summary it was as the days went on, and Saturday’s mostly matched that concept.

Next up was some host “happy talk” along with the typical “we have a new look but our dedication to the news has remained the same” messaging shows air when they make changes like this.

Then, the conversation segued into yet another series of teases — lasting about another 90 seconds. These previews did not have any specific graphics, with just the “CBS Saturday Mornings” version of the show logo in the lower left of the screen.

Only then did the show finally begin its top story on the coronavirus pandemic.

Although it’s not a new approach to stacking the show, it still felt like a bit too much time devoted to telling what’s coming up, though it may also be a strategy designed to help give viewers just settling in on a Saturday morning a better chance to get an overview of the show.

“CBS News Sunday Mornings” is big on hinting at what’s coming up through its unique text heavy illustration that airs at the top of each broadcast, though it doesn’t offer a format “tease” or “headlines” style block.

As mentioned, the show’s logo is still placed in the lower left of the screen to link up with the network’s redesigned and smaller bug. Because “Saturday Morning” takes up more character than “Mornings,” CBS opted to stack those two words on top of each other, rather than try to run them all the way across the screen.

The show switched over the new “CBS Mornings” lower third banners as well. 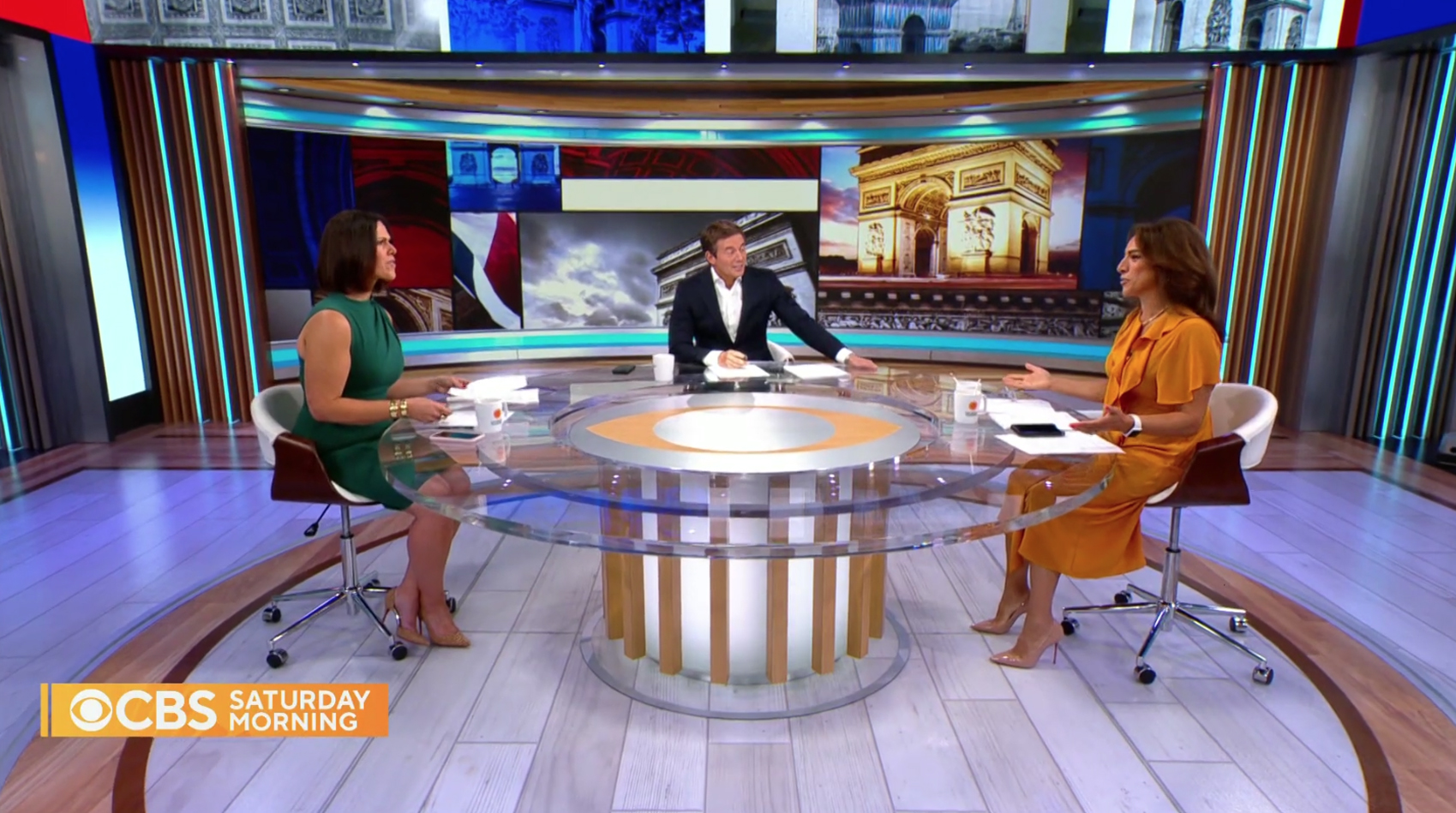 ‘CBS Saturday Morning’ used several fully topical video wall graphics that were not confined to the ‘Morning’ look, such as this French-themed one that included a blocky collage of imagery with matching looks for the studio’s LED headers, columns and even lighting cue. 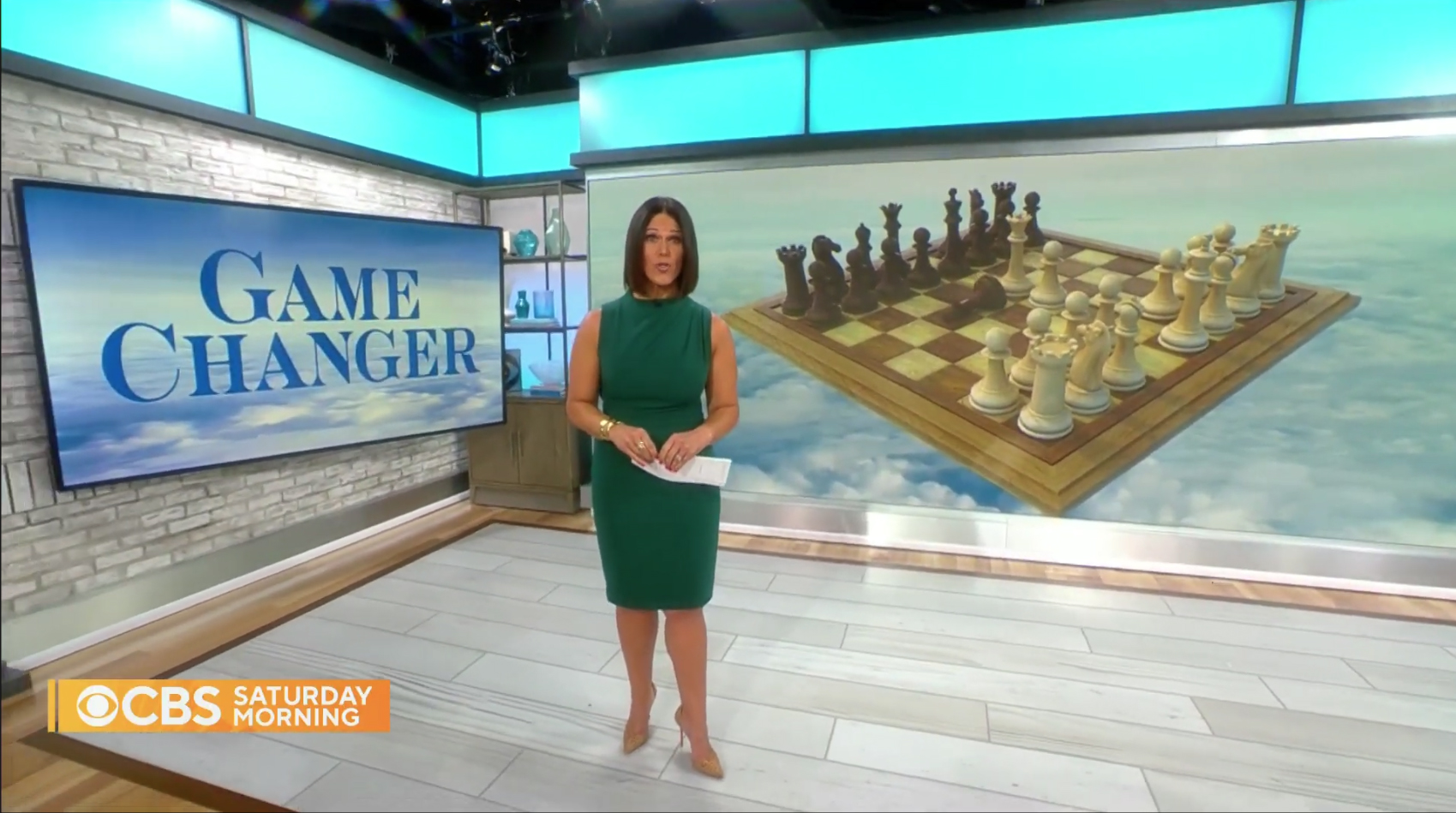 Another chess themed one for newfound interest in chess thanks to the ‘Queens Gambit’ incorporated two video panels.