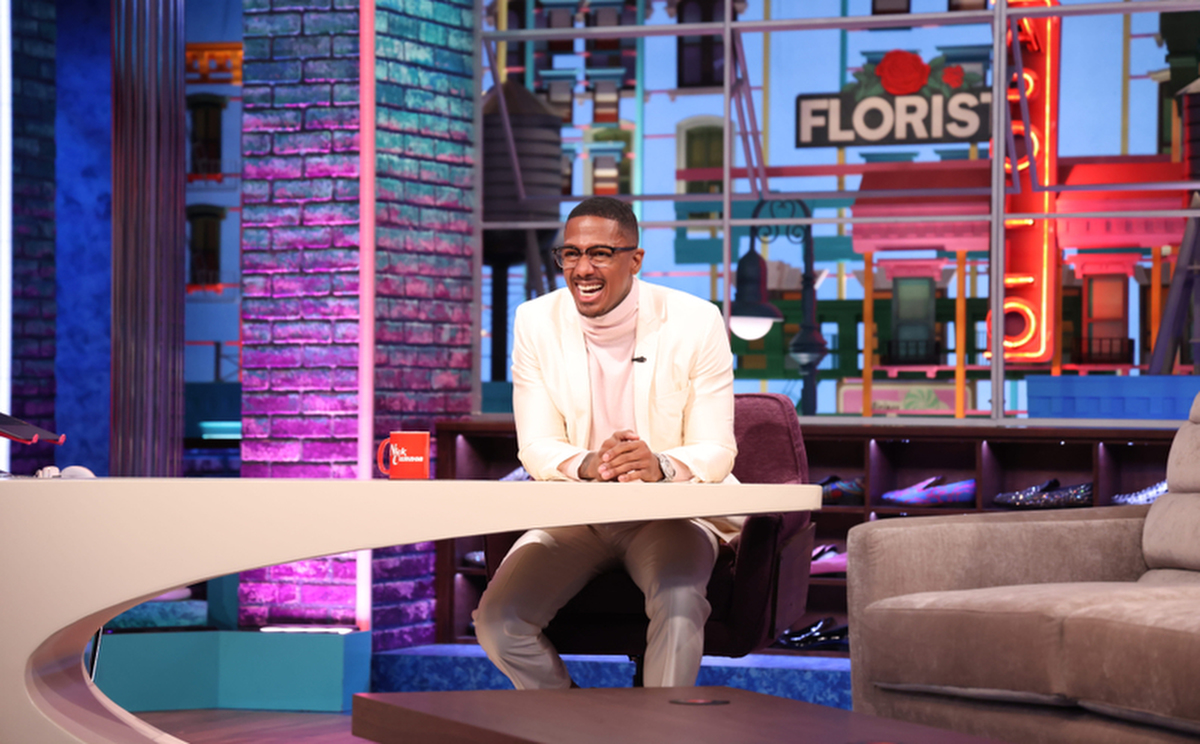 Many daytime talk shows look to their hosts to create a scenic environment that captures their personality — but that’s a tall order when considering a guy like Nick Cannon — whose flashy and eclectic style that’s based heavily on the bling and bold colors provides an overload of design opportunities.

Production designer Andy Walmsley faced this challenge creating the set design for the syndicated “Nick Cannon” talker that debuted earlier in the 2021-2022 TV season from Debmar-Mercury.

Research naturally started by honing in on Cannon himself — studying his style and photographs of his home for inspiration.

As with many colorful characters, Cannon proved challenging to “pin down” in that his look is such a blast of inspiration — so the next challenge became finding a way to create an environment that would reflect the host’s personality while also not going over the top.

Despite all that flashiness, Walmsley noted he was hesitant to move away from the classic daytime palette of beige, earth tones and cream, and ultimately opted to let that be the background of the look while allowing other elements to bring color to the space.

At the center of Metropolis Studio 105, located in Harlem and owned by NEP Group, Walmsley created a “model” cityscape view inspired by the one that sat behind David Letterman for years. 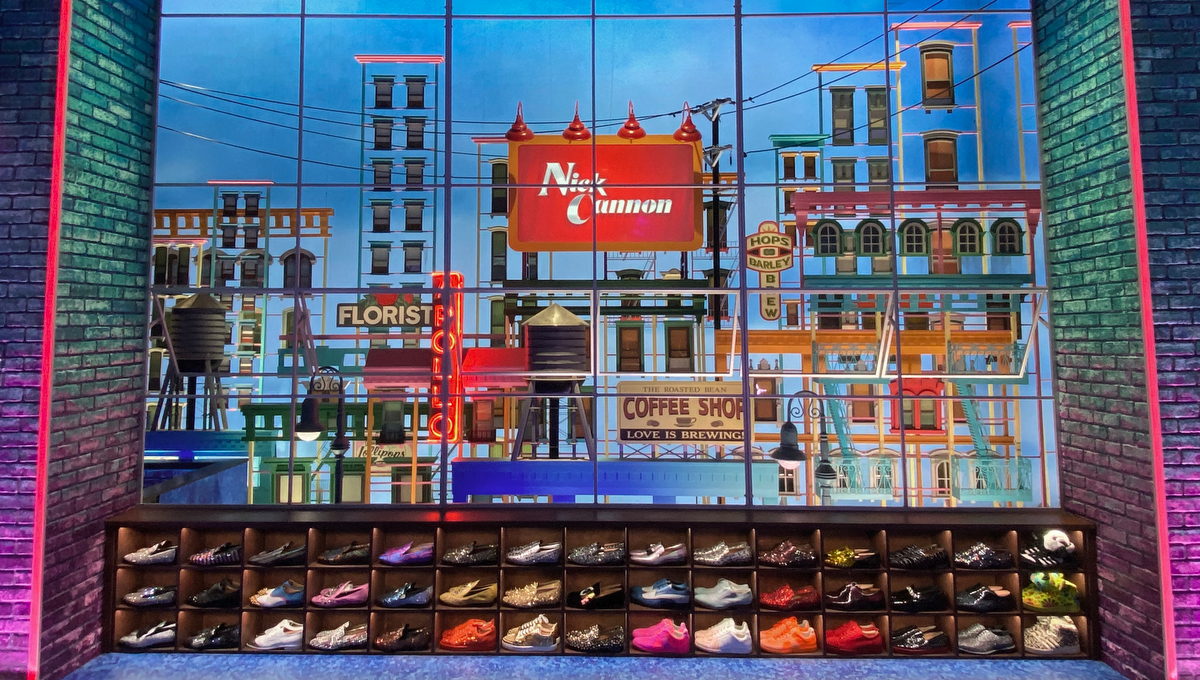 The cityscape diorama on the “Nick Cannon” show set.

Of course, a different approach was needed to make the background a daytime view. Walmsley ultimately settled on creating the buildings and other elements using a “skeletal” approach that allowed the backlit sky background to show through where usually that wouldn’t be possible.

This lent an airy, theatrical look to the background, handcrafted by a craftsman named Robbie Berkheimer in Las Vegas.

Berkheimer had retired from building sets a few years back but still maintains a small workshop at home. He and Walmsley have collaborated on other projects. 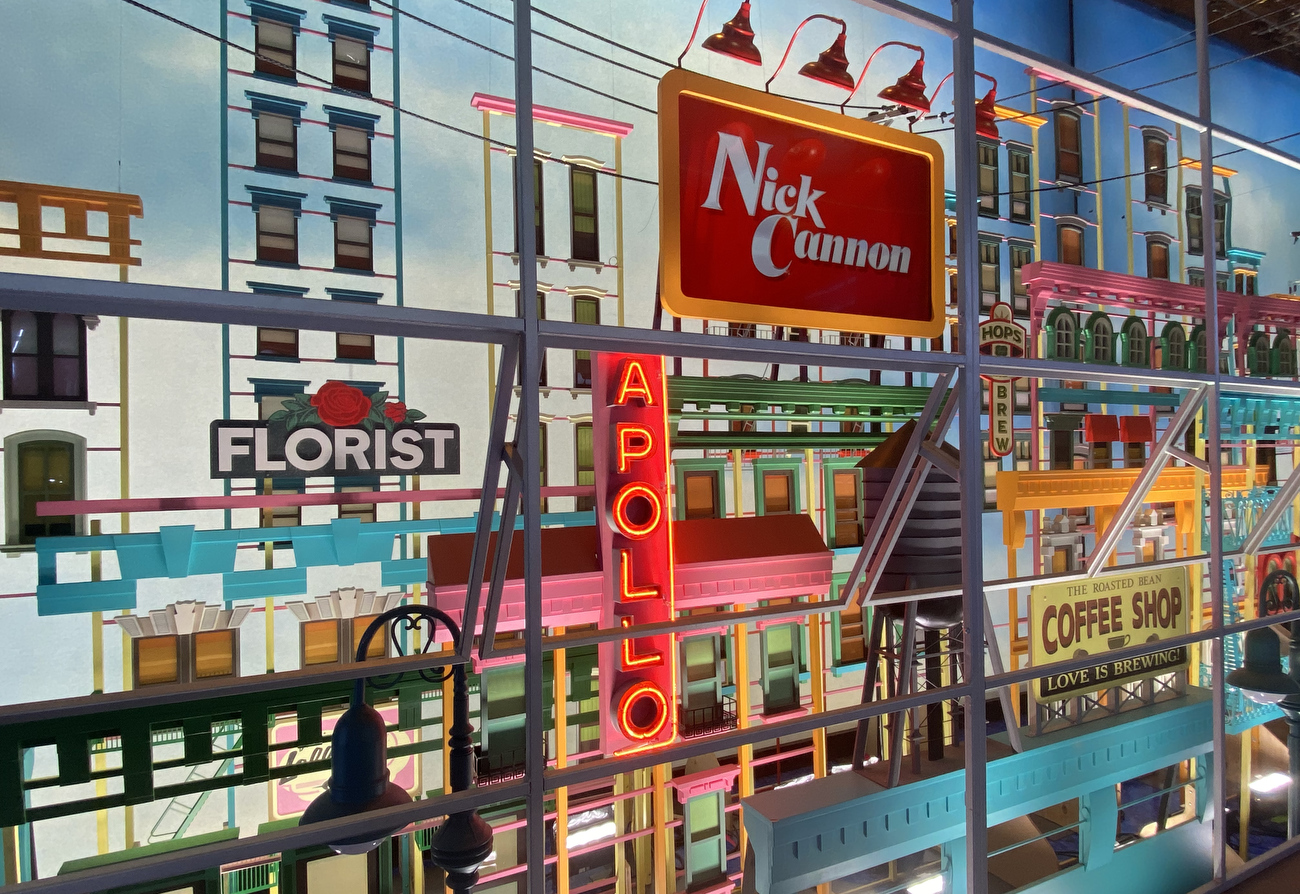 Berkheimer had the idea to create the street lamps from old Coke bottles while Walmsley worked in the Apollo Theater marquee with some of his trademark neon elements.

While there was some initial concern about how the iconic landmark would be reimagined behind Cannon, Apollo management stopped by during the load-in and loved the concept — giving it their final blessing.

Camera left of this installation is a 10 foot tall by 20 foot wide LED video wall from Gary Clark at Resolution Staging that can be raised and lowered as one of six options for entrances packed in the set design. 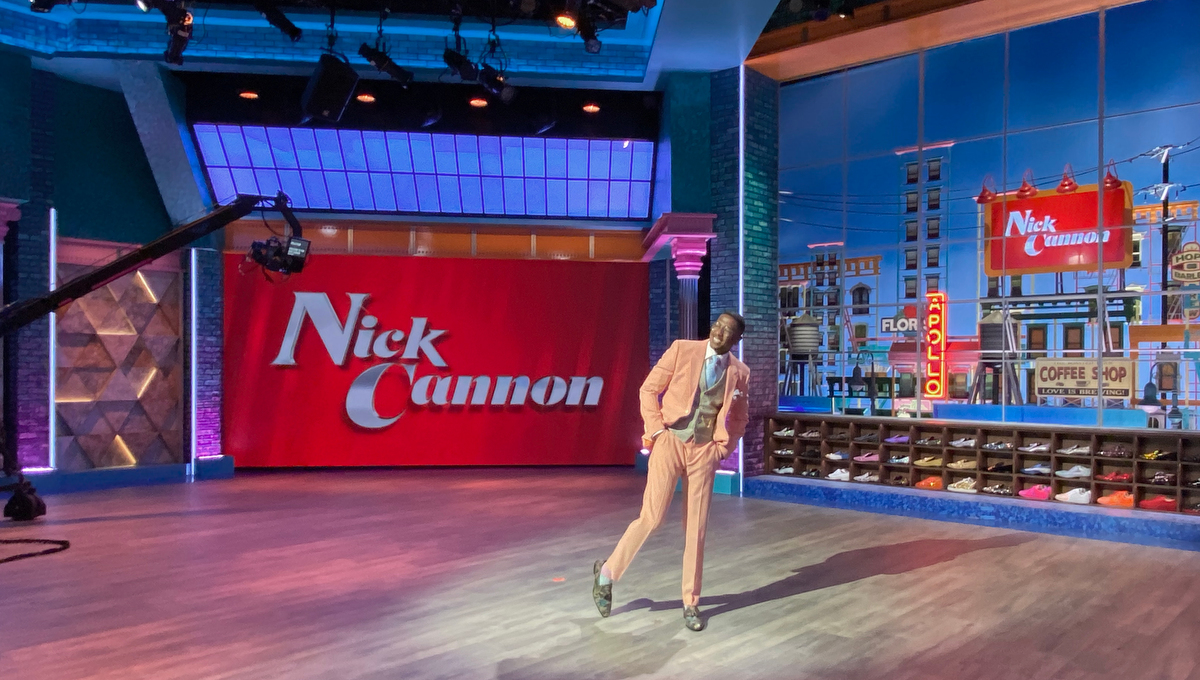 This was an engineering feat in itself — given the studio is perched above ground level with a police station and school below, the entire rig had to be carefully engineered. After an initial attempt at using counterweight systems similar to those found in theatre productions proved too unstable, Chris Hyde at fabricator Global Entertainment Industries worked with a building engineer to create a system of “spreader feet.”

That support system had to be hidden in the scenery, and thanks to the skills of Broadway riggers, lets the crew fly the wall in and out smoothly — and only requires a single crew member to operate. In addition to serving as an entryway, the video wall also gets plenty of use throughout various segments. 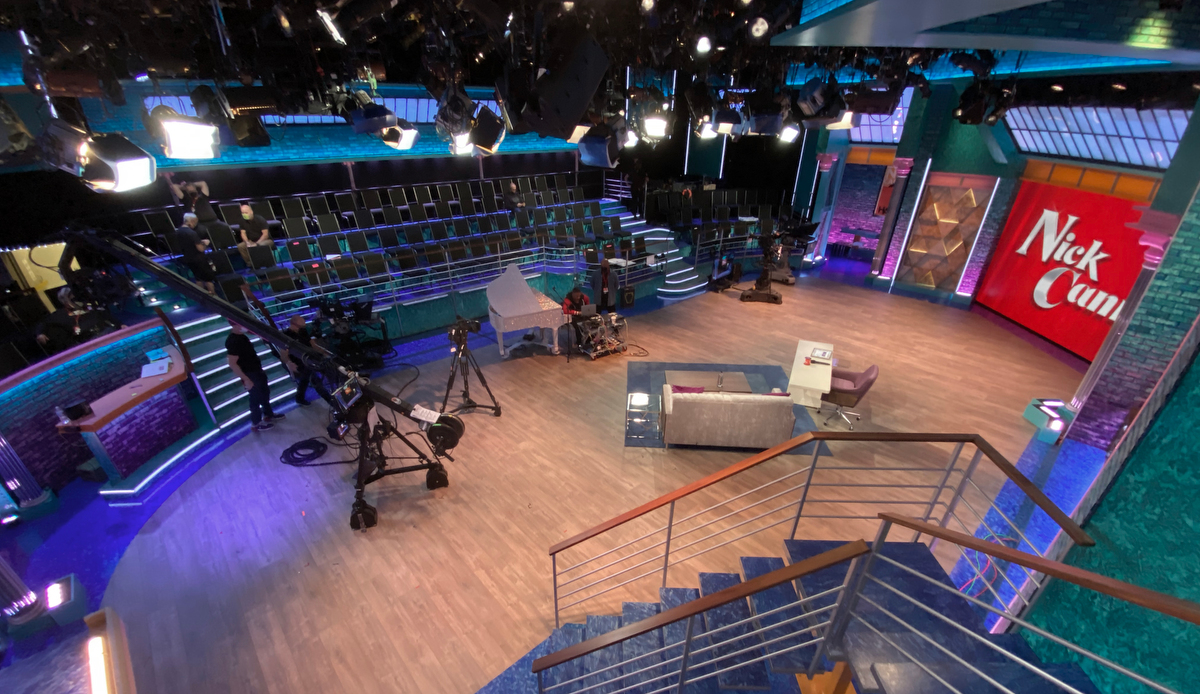 Meanwhile, the rest of the space is filled with a mix of loft-style architecture with zones that feature elements inspired by Cannon’s life, career and interests.

“I get excited when I’m researching ideas and just want it all,” said Walmsley in an email interview.

For other projects, he tends to do just that — throw it all into the design and then scale things back for a cleaner, cohesive look.

However, in this case, throwing everything at the wall “stuck” and worked well with Cannon’s personality.

The backstory is that the show is filmed in a loft in Harlem that’s, by Cannon’s request, a “manchild playground.”

The plastic candy dispenser tubes are inspired by similar ones in Cannon’s real home — while other areas showcase a shoe collection and faux album sleeves.

“I had assumed we would purchase fake bedazzled shoes but Nick insisted that his actual shoes be on the set,” noted Walmsley, who got the idea after learning about Cannon’s massive (and pricey) shoe collection.

In a nod to Cannon’s music career, there’s also a wall of faux album covers (legal concerns meant that real album art couldn’t be used) that were created by a team of graphic designers and dramatically lit speaker cones. 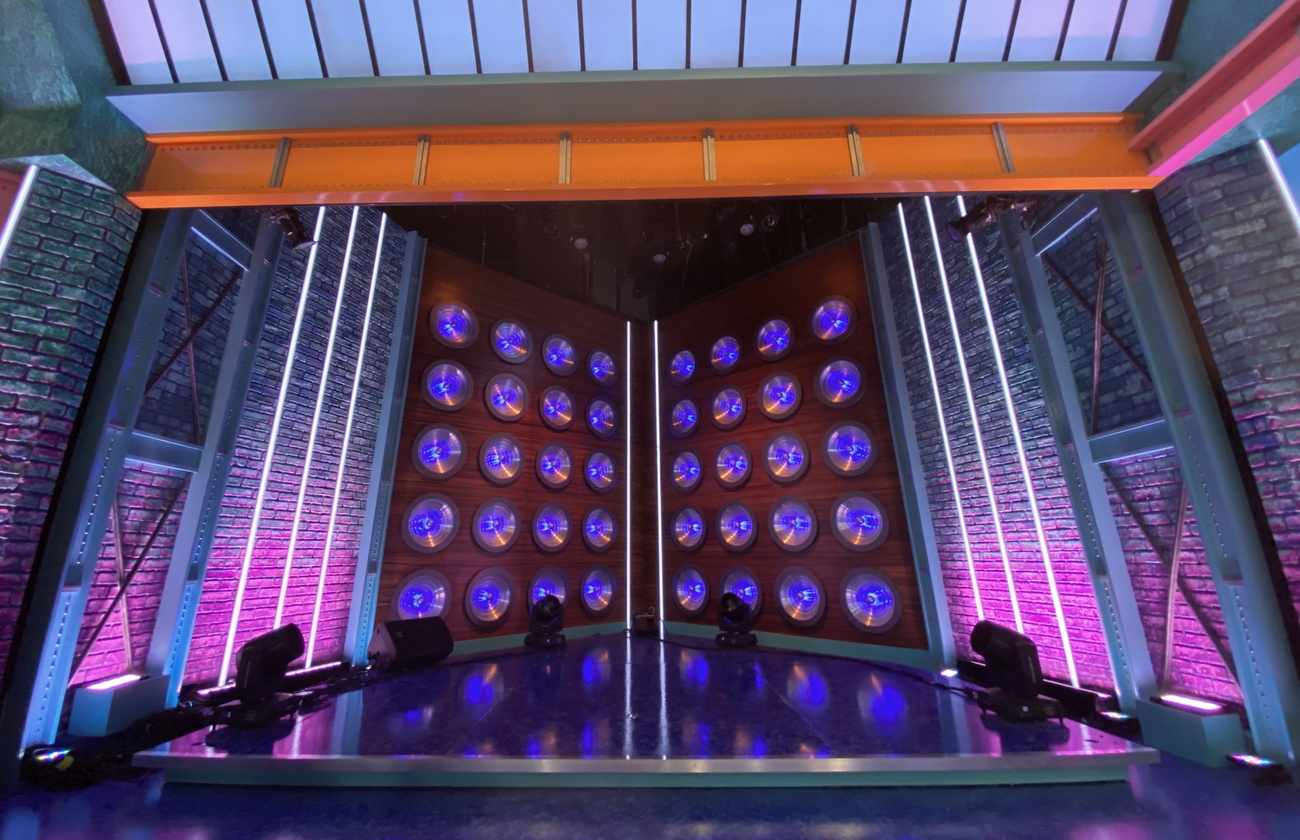 The units, which contain color-changing LED, aren’t actually speakers — “real ones are black and boring” — but created using oversized spun aluminum cooking pot lids. There was a nail-biting time when the construction team came up three short and sourcing new ones took weeks — though they did arrive just in time to make it on the truck from LA to New York.

There’s also a practical stairway and fireman’s pole — both of which can be used for entrances.

Another unique element of the design is the use of mirrors — not an element that’s seen on a lot of TV studios given that they, by definition, reflect light and scenery. 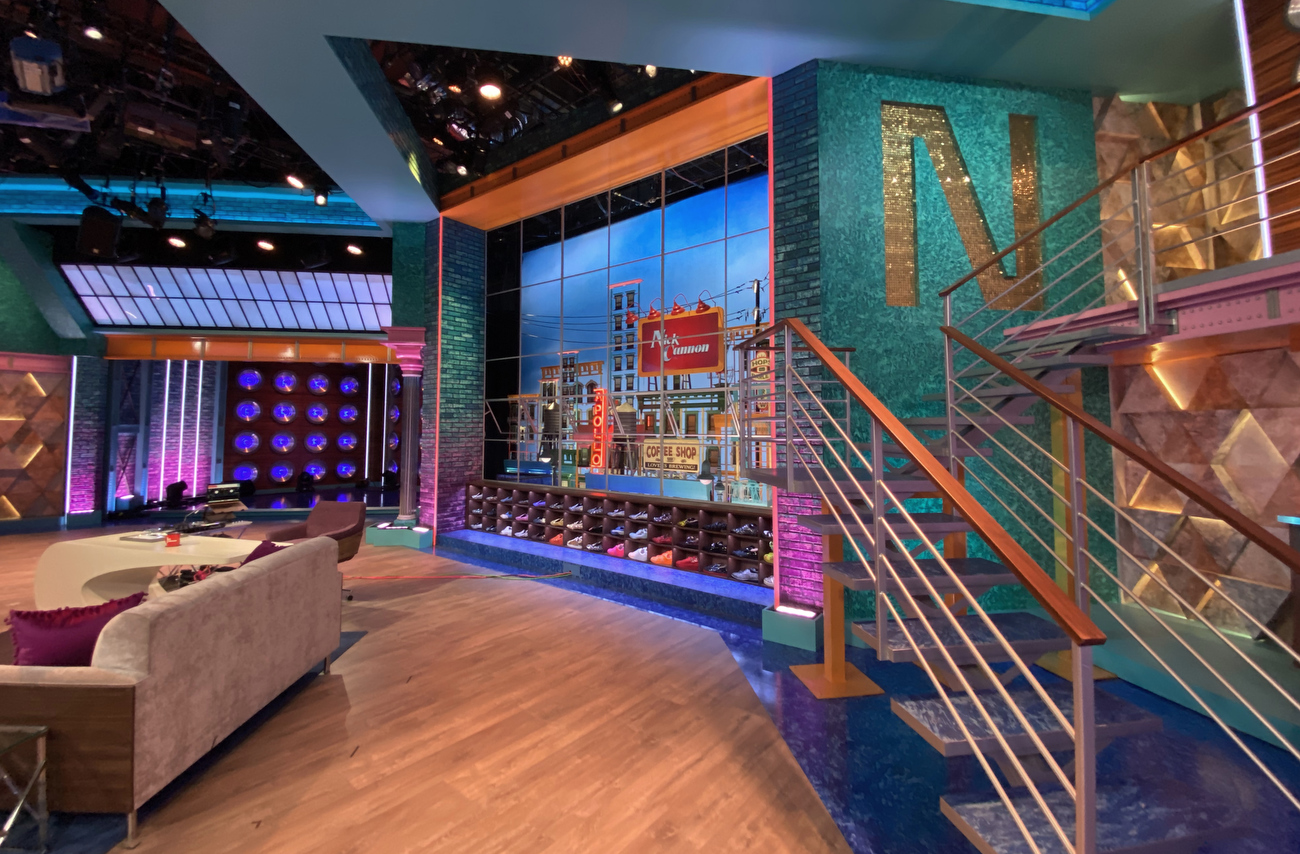 The biggest mirror on set actually has a practical use. It’s 10 feet wide by 25 feet tall and installed perpendicular to the cityscape, making it appear twice as large as it is.

In reality, thanks to the relatively small studio space, the background is only about 30 feet wide, but looks to be more like 60 feet wide on camera and when standing in the studio.

There’s also a real mirror, a prop held by a person, that Cannon looks at after entering the studio, a tongue in cheek nod to the style of James Brown and other classic entertainers to who had a valet come out on stage to take their coat and show them a mirror (Cannon typically takes off his own jacket and hangs it on a hook next to an architectural column).

There’s also a freestanding LED screen that’s used for both remote interviews and makeover segments to create the illusion of a mirror, but in reality it’s showcasing a video feed of the person, rather than an actual reflection.

Viewers will also notice the dramatically shaped desk that Cannon sits behind for select segments. That desk is leftover from the pilot and a different one was actually built, but a series of events meant the original one worked its way back into the final set.

The pilot was shot on the “Wendy Williams Show” set, which Walmsley also designed, and Debmar-Mercury had toyed with the idea of using the same Chelsea studio for both shows, which would have included a “Transformers” style set with tracking systems and other scenery that could change up the look quickly. That, however, ultimately did not happen and “Cannon” is found a home in Harlem.

The show also had to source a baby grand piano and customized it with a glittery finish. It’s often positioned in front of the audience area and mostly shot in reverse for segments where Cannon performs songs. 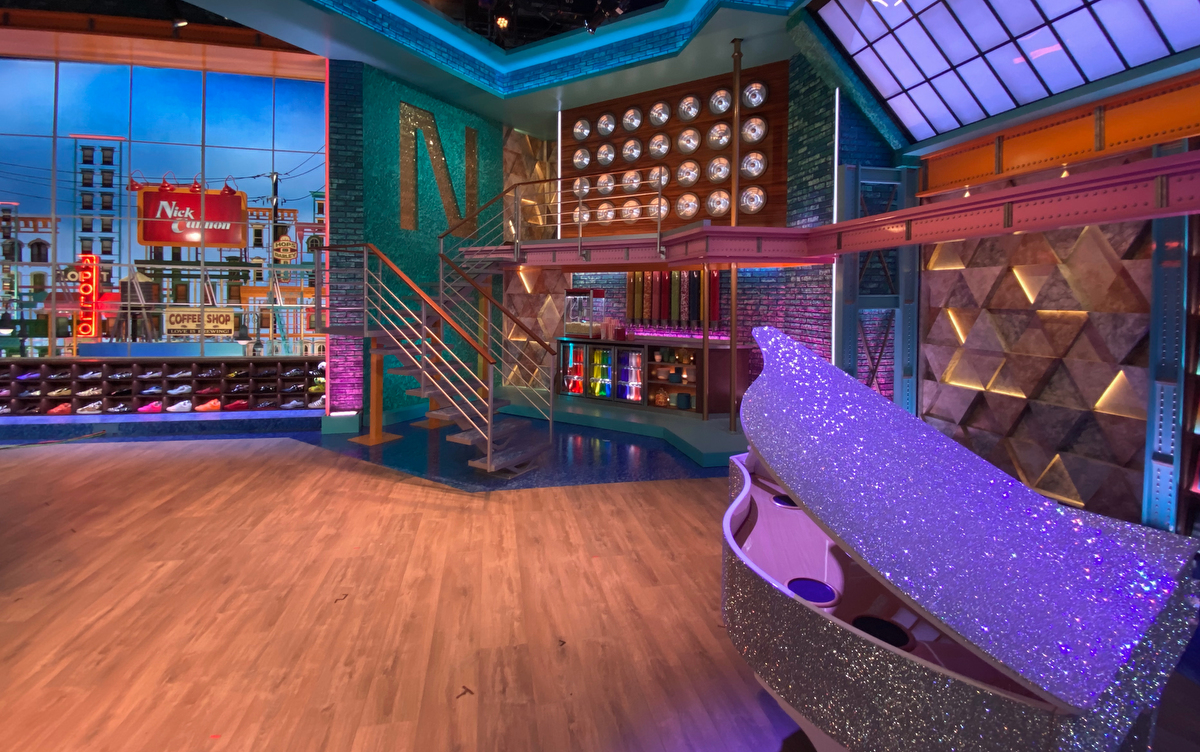 Walmsley had wanted to use a true grand piano, but space considerations meant there was nowhere to store an instrument of that size, so the scaled-down version had to be used.

Another victim to space considerations was a planned library area, a reference to the fact Cannon is an avid reader.

All told, Walmsley sums up the design as a true reflection of Cannon.

“His persona is he’s a fun guy but very driven with a serious undertone, but he also doesn’t take himself seriously,” said Walmsley.

During the first design presentation with Cannon, the host loved the concept, especially the fireman pole, but requested even more pops of color — a lot more.

Walmsley took those notes and went back to the drawing board to figure out ways to bring in splashes of color through finishes on the scenery and more decorative items.

The placement of every color was carefully considered — including the colors of the candy that fills those tubes. That is real candy, too, and Walmsley admits to snacking on some that didn’t make the cut or that needed to shuffled around as the best blend of color was determined.”