When looking to create an updated look for the larger than life fashionista talk show host Wendy Williams, production designer Andy Walmsley had the advantage of looking no farther than his own home for inspiration, he told NewscastStudio in an exclusive interview.

“It helps that my wife is very glamorous, I live amongst glitter and sparkle at home,” said Walmsley, meaning he’s been able to add “glamour, sparkle and camp,” to his design repertoire.

Walmsley had just wrapped up projects for Ru Paul and also created a permanent drag race theater show in Las Vegas, so that, combined with his home decor, was all great experience in the new design for “Wendy Williams.”

He was originally called up to see if there was a way to use the “Wendy” studio to also produce a talk show starring Nick Cannon (the two share production companies). “Wendy” tapes in the same Chelsea complex that is also home to “Rachel Ray.”

“I returned with renderings and animations for a ‘transformers ‘ type set that had walls that span around other walls and whole giant units that could pivot around to create a completely different set in the same studio which could turn around with about four stagehands in less than 30 minutes,” he explained.

Cannon has filled in for Williams during some of her health challenges but his show was ultimately postponed from its 2020 debut after controversial comments he made on his podcast.

When working with the design for “Wendy”, however, Walmsley always wanted to keep a level of sophistication and refinement to the look — no matter how over the top its star maybe.

Take the “W” in the show’s rendition of Williams’ first name — it’s a clean, well-angled motif and, while it showed up in an abstract way on the double doors she enters through on the previous set, it didn’t match the letterform in the show’s biggest piece of visual branding. 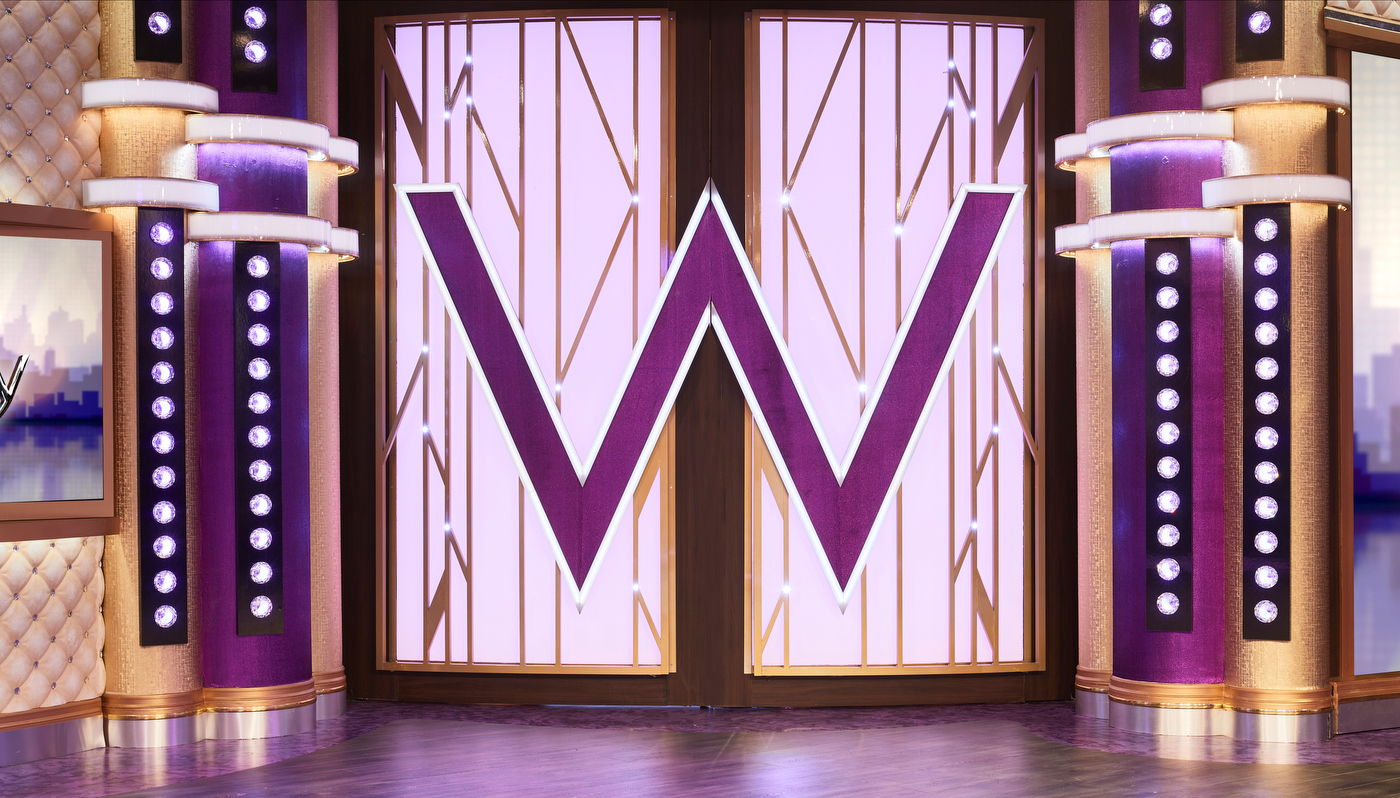 Walmsley addressed that by creating an internally lit installation of a giant “W” that’s a typographic twin to the logo design. He also continued that notion by installing large dimensional versions of the show logo throughout the studio.

‘It helps that my wife is very glamorous, I live amongst glitter and sparkle at home,’ said Walmsley, meaning he’s been able to add ‘glamour, sparkle and camp,’ to his design repertoire.

While frequent viewers will note the basic layout of the set is essentially the same, Walmsley said that was a key part of how he approached the project after getting some sage advice about what types of things Williams and her team would be reluctant to change.

However, that guidance also helped him understand better where he could push the envelope and encourage the show to step outside its comfort box — all in the name of creativity.

One change that he gently pushed through was dropping the cityscape backgrounds that appeared behind the double doors, in the audience area and the far right wall (those graphics still appear in some of the images in this article because they were taken while design work was still being done). 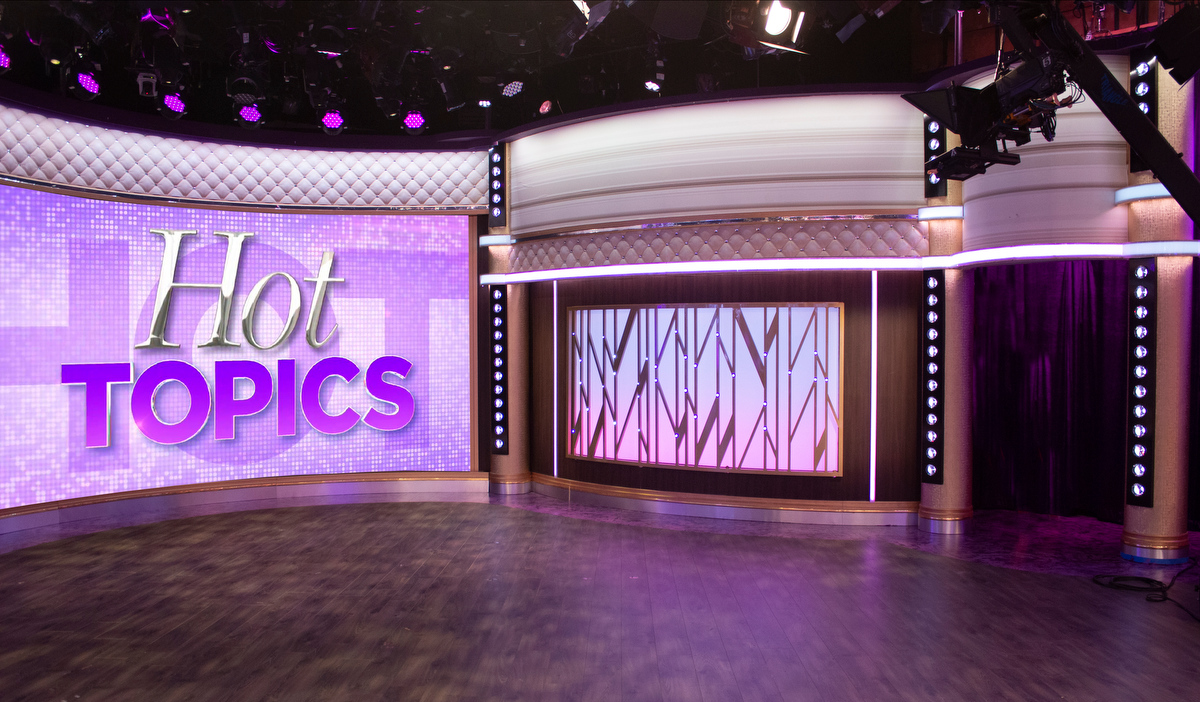 While the fact that element appears in the show’s graphics package meant it could be a challenge to move away from — and the show is quite proud of its New York City roots, he was ultimately able to install vertical metal sculptural screens with angles and accent lighting — that was placed in many of the same places as the city imagery had been as well as serving as a layered element behind the giant “W” on the doors.

Ultimately, the look has the art deco feel of something you might find in Rockefeller Center or the Chrysler Building — but also doesn’t feel too much like Hollywood, Walmsley noted.

It helps that the angles in the units are a close match to the ones in the “W.”

One battle Walmsley opted not to fight (and for good reason) was making any changes Wendy’s famous purple chair or the table next to it.

It had just been replaced in 2016 and it’s become almost like another co-host — just like Williams calls her studio audience — thanks to its prominent on camera appearances during the show’s “Hot Topics” segment.

Although Walmsley kept his hands off the chair, he did use it as a jumping off point for a key new glam element introduced in the new look.

“I knew I wanted to do tufted fabric with plastic diamond buttons,” he explained, but knew from experience it could be a pricy proposition to use real fabric.

As luck would have it, he was searching for 3D ceiling panels for another show and stumbled upon faux tufted panels for $16 apiece on, as Williams would say, the Google Schmoogle.

He ordered a piece and tested it out — and was amazed at how real it looked, so another, much larger order was placed for the two by two-foot panels.

“All we had to do was glue them to the set, fill the seams and scumble paint to fake a velvet fabric texture then glue the plastic diamonds on top of the buttons,” he recalled. 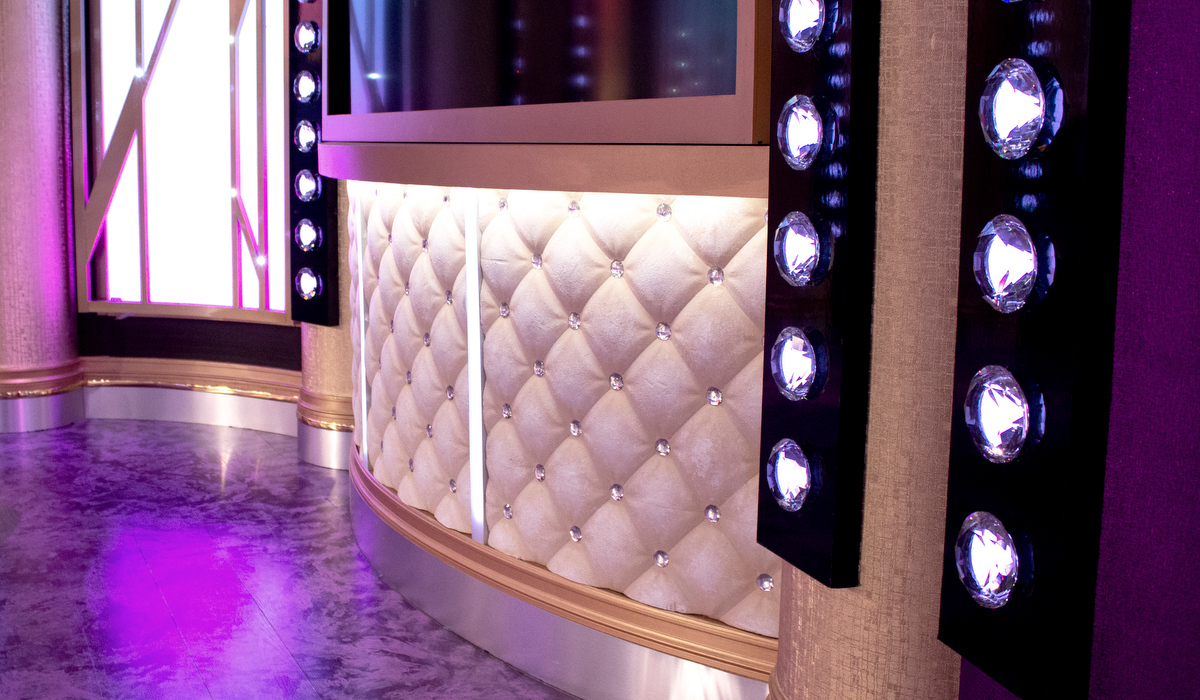 Faux diamonds also found their way into the vertical columns, including ones that had been updated in the 2016 redo — but the build team stripped those apart in order to install vertical lightboxes and columns of four-inch glass diamond-shaped paperweights.

‘Some of it you can see its fairly obvious and a lot of it you don’t even notice its subtly lighting walls and areas that need a kiss of light.’ 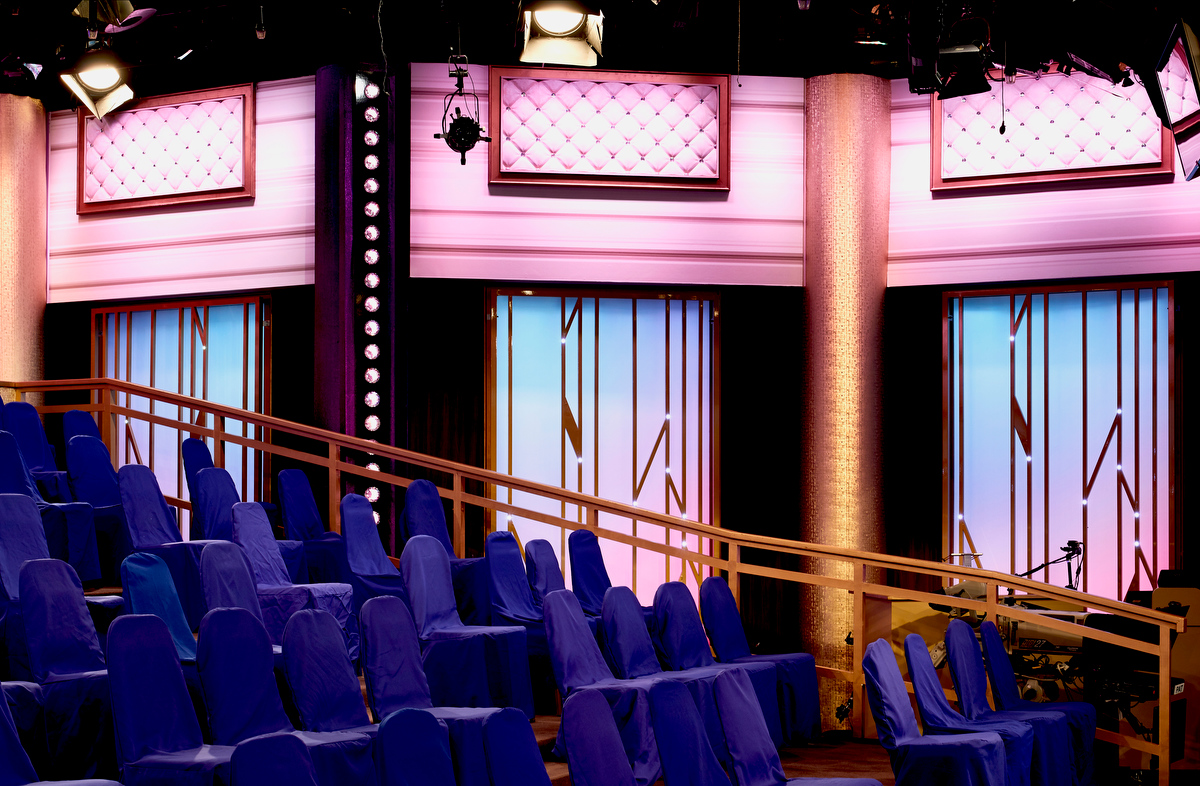 Walmsley found those online too — and ordered one to test at home (in his bathroom, thanks to its lighting fixtures). Pretty soon hundreds were on the way to be installed in these custom creations.

Another big update is the so called “media wall” — which is now completely seamless and curved thanks to Unilumin’s Upad LED 2.6mm tiles in a 21 foot wide by nearly 10 foot tall space.

Viewers will also notice plenty of brightly edge lit elements created with a whole lot of LED tape — both in places you might expect and some more subtle spots.

“Some of it you can see its fairly obvious and a lot of it you don’t even notice its subtly lighting walls and areas that need a kiss of light,” notes Walmsley.

Other updates include bringing in metallic gold and violet textures to the space’s pillars.

The install for the new studio started in August 2020, but Walmsley was on the West Coast and traveling to New York would have required a 14 day quarantine, some ultimately he monitored the install remotely thanks to photos and video calls.

Like most talk shows, “Wendy” is forgoing a studio audience due to coronavirus, instead filling the seats with socially distanced staffers and crew.