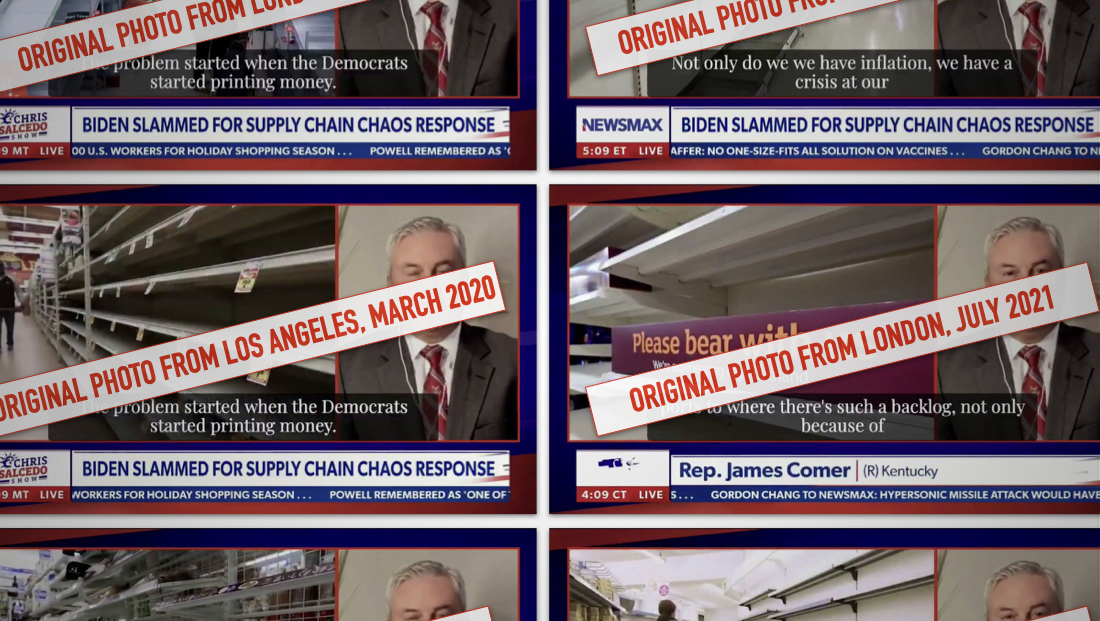 Two networks got caught using outdated photos of mostly bare store shelves as they blasted President Joe Biden and the recent supply chain issues the country has been facing.

Fox News and Newsmax both got caught by Politifact’s Bill McCarthy, who tweeted screenshots from both networks showing the misleading imagery along with citing examples of the original photos in an accompanying story.

Some photos in a Newsmax clip actually showed London, Australia, Japan and Berlin. One was taken way back in 2012. https://t.co/65Cn7g3QF8 pic.twitter.com/W5JGOT7Sbp

All it took to catch many of the out of context imagery was a simple reverse image search, according to McCarthy.

Newsmax was particularly egregious, showing six images, five of which were taken months before the 2021 supply chain issues.

Four of the photos weren’t even from the United States — instead taken from stores in Japan, London, Australia and Germany. Of these, the one from Germany was actually taken in 2012 — or about eight years before Newsmax aired them alongside its supply chain segment.

It also was showing, according to the accompanying caption provided by Getty, a business that was closing its doors in 2012 so the lack of inventory was likely due to the business trying to get rid of everything rather than delivery issues.

The only photo from 2021 was the one from London.

Fox, meanwhile, used two photos from March 2020, in the very early days of the pandemic, during “The Ingraham Angle.” Similar incidents have popped up on the network during other shows.

None of the images used were labeled as “file” — much less shown with a date or location identifier.

The photos did have one thing in common, however — they all showed particularly empty shelves that were, at least in many places, more of a common sight during the start of the pandemic. There are still empty shelves to be seen, of course, but it’s not nearly as drastic as what the images portray in many places.

Most newsrooms have standards that would have barred these outdated and out of context images from ever appearing in a current setting (especially given that sending someone out to snap a few photos of empty shelves wouldn’t be that hard).

At the very least, if the photos were somehow all the network could dig up, they would have likely been required to be clearly labeled as file photos, along with appropriate date and locator lines.

The photos appear to be culled mostly from reliable news photography agencies but Fox and Newsmax essentially used them as “stock photos.”