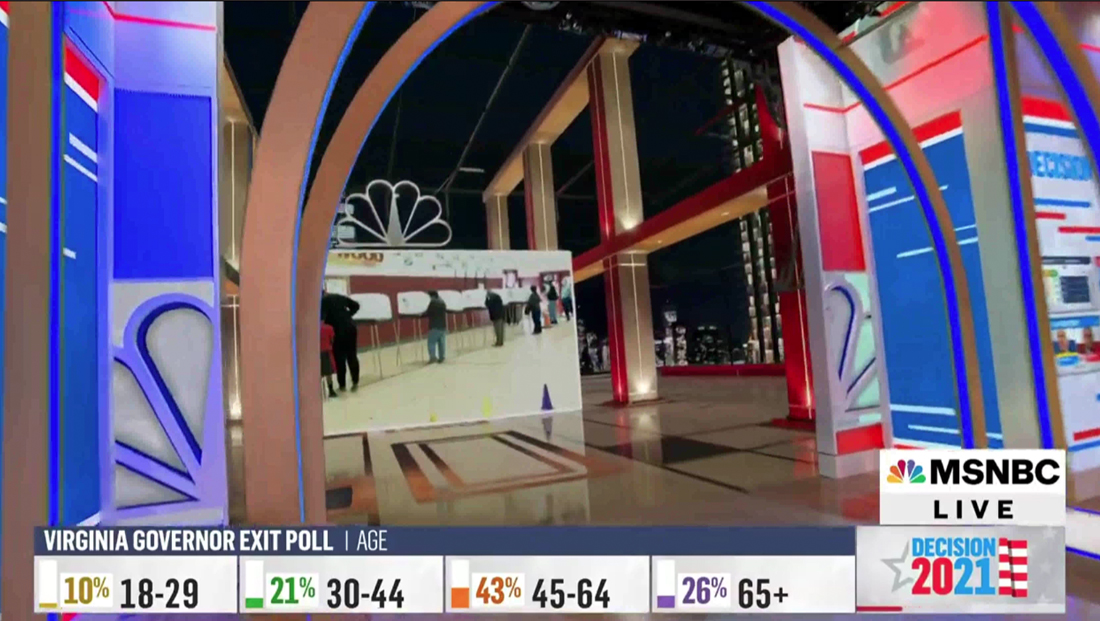 We now know at least one option of what’s (virtually) behind those big sliding walls in MSNBC’s Studio 3A.

During 2021 election night coverage Nov. 2, 2021, the network used the green screen space on the behind the doors on the west side of the studio for the first time — adding a virtual set extension that gave the appearance of an elegant open atrium overlooking New York.

This look was created by Dot Connector for the network using Vizrt tools.

This chroma key area was added during the 2021 renovation to Studio 3A that debuted Sept. 20, 2021 and occupies roughly the same place the network previously had a cluster of workstations.

Two large, floor to ceiling walls segments can be slide aside to reveal the space behind, but have been kept mostly closed until now, preventing the glaring green from appearing on air when the virtual set technology, which requires a combination of graphics software and camera tracking, isn’t active.

When closed, integrated LED video panels, including ones that go behind a frosted peacock logo installation that splits down the middle when the wall is open, are used to create a variety of looks.

Sitting behind those walls is an approximately 28 by 28 foot space outfitted with Pro Cyc wall units and a green floor.

Similar to the notion of the virtual set extensions used during “MSNBC Reports” this green screen space was envisioned as a way to “add on” to the real studio and provide additional opportunities for storytelling on a standalone basis or in conjunction with the rest of the studio.

In this composite animated image created by NewscastStudio, the green represents the portion of the screen that is computer generated, while the areas in either side covered covered by green are real scenic elements. On the left portion of the wall illuminated in blue, there’s a vertical strip of where it appears the virtual set extension was inadvertently inserted despite this being part of the ‘real’ set.

For election night, MSNBC created a sort of open atrium observation deck — perhaps inspired by the “Top of the Rock” attraction that’s part of its headquarters complex — backed with a dark cityscape and framed out with columns that match the structure and reveal line pattern of those found in the real studio.

The columns were a goldish hue to match the tons in the studio and were “uplit” with red lights on the right side and blue on the left.

The design also includes simulated cables supporting these structures as well as a metallic NBC peacock suspended from the above the virtual space above a recreated of the skeletal archway found in 3A.

MSNBC had the option to trigger a floating graphic to “pop up” in the middle of the virtual floor, complete with reflections on the simulated floor that included art deco style patterns similar to those found in the ceiling lightboxes in the real space.

This panel could be used to showcase imagery, race graphics and even promotions for upcoming series. 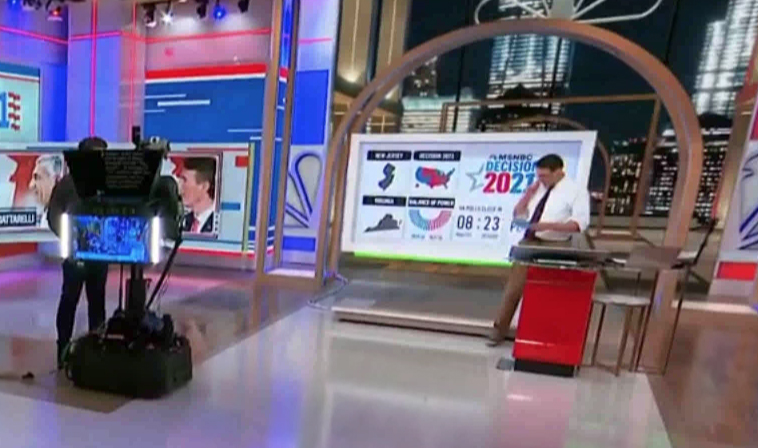 In this detail of a toss to Steve Kornacki, a narrow sliver of green can be seen just under his wild touchscreen monitor that the computer apparently missed.

MSNBC positioned data whiz Steve Kornacki in front of the real archway and frequently used handheld cameras to move from either the video wall camera left of this space or the primary anchor area in the southeast corner of the studio and “into” the virtual space beyond.

Kornacki’s touchscreen was previously positioned at the very end of the curved LED ribbon camera left, which lead to it becoming known, at least internally, as the “Kornacki Curve.”

It’s now a bit farther away from the end of the curve, just off center from the archway. As in previous elections, MSNBC mounted a small camera to one side of Kornacki’s workstation and let viewers tune in to the so-called “Kornacki Cam” any time they’d like. It also frequently appeared in a box on screen during commercial breaks.

The virtual space also continued to appear, behind most of Kornacki’s segments given that most of the straight on shots would have captured mostly green behind his monitor.

MSNBC opted to use the large, curved “star” desk that’s been used during past election coverage instead of the new red, L-shaped one that was designed for the new studio space and special coverage like this — but notably had only three people seated at the desk, which can accommodate at least twice that, so the desk choice may have been partially a social distancing decision.

Guests joined the show from a variety of locations both inside 30 Rock and other cities, including the former home of “NBC Nightly News,” Studio 3AW (formerly Studio 3C) and the insert studio “news nooks.”

Most of the network’s graphics reflected the same 2020 election look and the famous election theme was also used extensively.