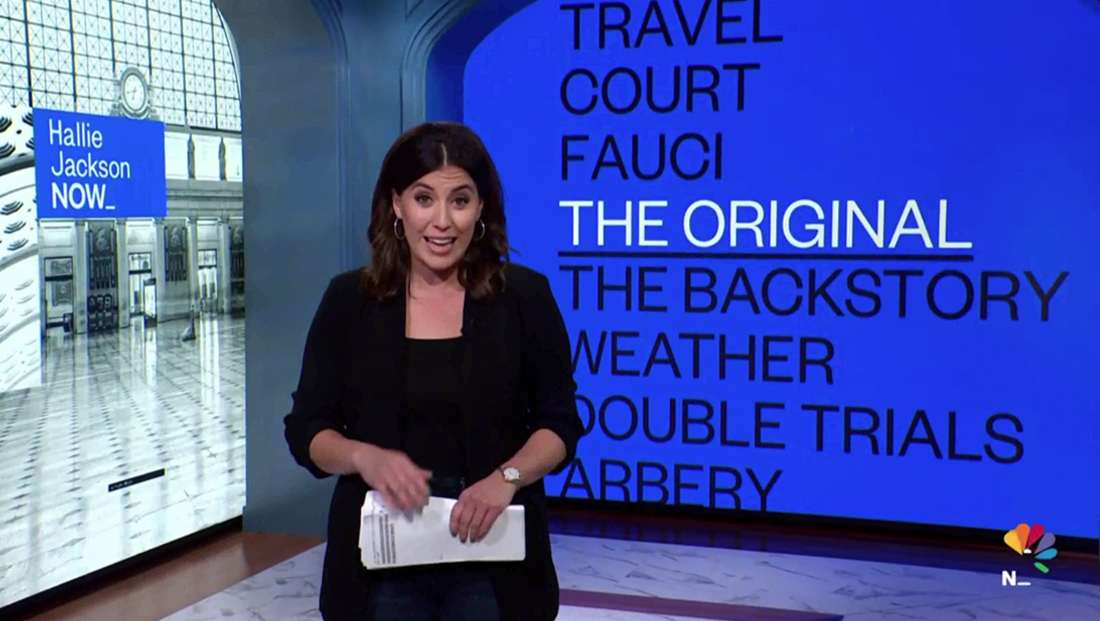 After a two day delay due to an unexpected anchor illness, “Hallie Jackson Now” debuted on NBC News‘ streamer with a look that leans heavily on a a wide variety of typography presentations and distinct animations.

The show title is stylized on air as “Hallie Jackson NOW_” and that underscore at the end is a common theme throughout the show’s graphics.

That underscore, along with many of the graphical elements throughout the show, would be introduced in a complete graphics package overhaul for the streaming channel the following day.

The name itself appears to be a blend of the NBC News Now, the name of the streaming service, and the “MSNBC Reports” style branding that can use the anchor’s name in place of network name — including with Hallie Jackson herself, who anchors “Hallie Jackson Reports” on the cable channel. The two shows are distinct from each other, however.

NBC produces “Hallie Jackson Now” out of Studio N1 in its Washington, D.C. bureau, the first-floor studio that’s also used by “Meet the Press” and other D.C.-based programming.

The show makes extensive use of the LED video wall panels between the colonial-style archways painted in a distinct blue shade as well as the wild monitor cart and federalist-style desk that overlooks the adjacent newsroom.

The show’s open features a combination of typography-based layouts with topic lists, a simulated “inbox” and text accents suggestive of taking action on an app or site, such as “open” or “search” that also feature animations where one or more letters change.

Similar text accents also include notations such as “1 minute ago.” 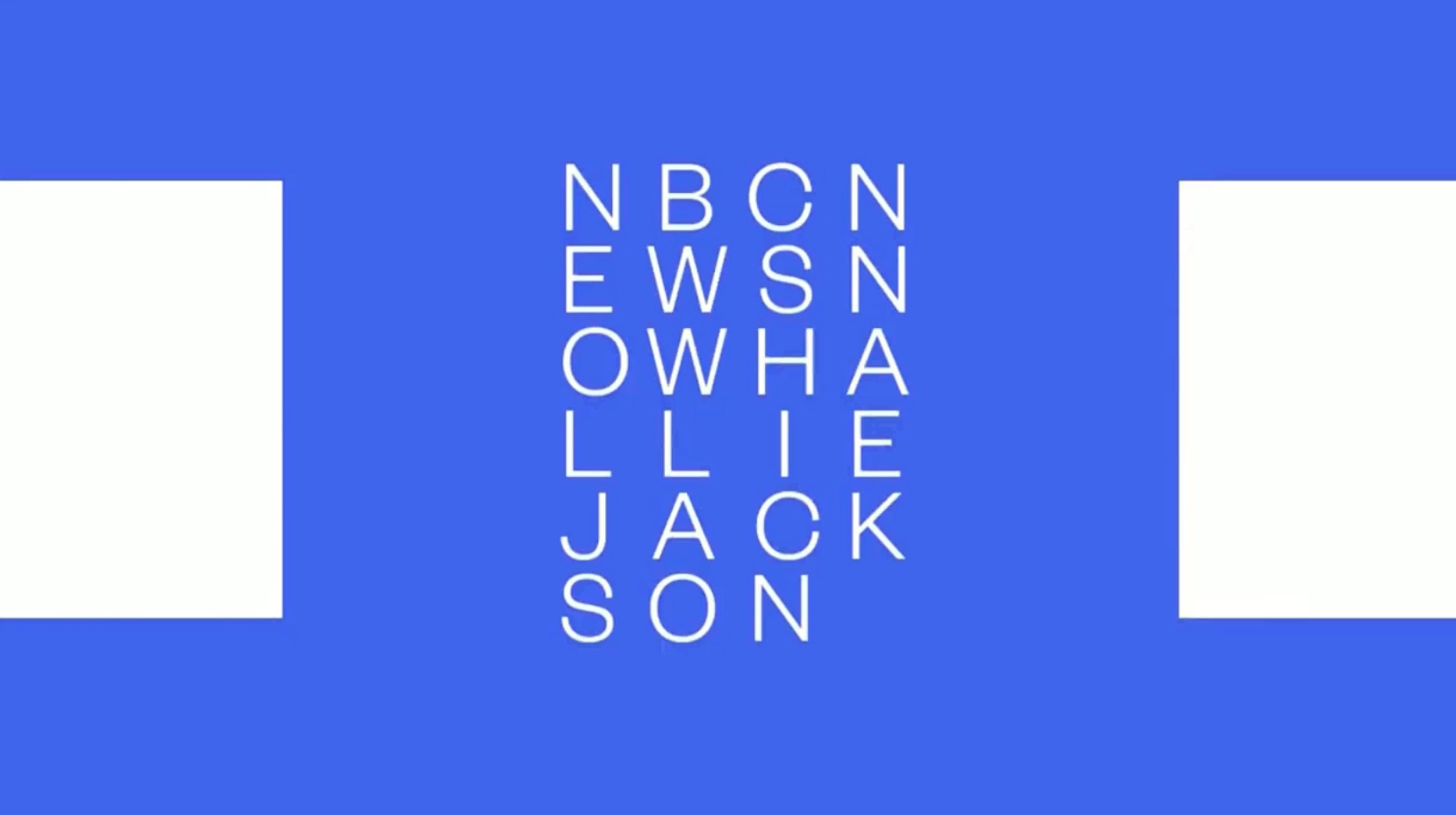 Various typographic presentations are found throughout the show, including in wipes, stingers and tease graphics, with words sometimes appearing “split” in order to create a grid like arrangement of text.

For theme music, the show uses VideoHelper’s “Elegant Murder” from the “Simplified: Intrigue” volume, a strings-heavy cut that is both elegant and urgent.

Jackson opens the show from one corner of the blue paneled walls, with the logo on one video wall atop a stylized image of the nearby Union Station and the other showing animated topical graphics that relied on a rundown style list of topics and stories that animate to turn the current one white with an underline.

Similarly, at the very top of the broadcast, text of all of the month names and day and year numbers that scroll into place — similar to the look of the date picker that Apple recently stopped using with the introduction of iOS 14.

After a series of tease headlines, Jackson then made a rather awkward on camera turn where a different camera captured her against the logo video wall, which turned red behind her.

This same corner was used throughout the show, along with the mobile LED monitor cart, for “video on video” style shots as Jackson discusses a story, while Jackson moved around the studio, mostly relying on the wide red anchor desk that’s a modern take on an antique with the newsroom behind her.

That newsroom space is mostly used by “Meet the Press” staff (the main NBC bureau newsroom is upstairs), so the space appeared mostly deserted during most of the show.

In addition, the “picture frames” on the walls, which are actually LED panels, were fed branded show graphics.

The in-show graphics mostly make heavy use of a bright blue shade along with a darker blue accent along with black and white imagery that’s often animated to slide in and out and adjust sizes on the fly to change which is dominant.

Lower third graphics, meanwhile, are red for breaking news and blue the rest of the show and use similar animations as the topical video wall graphics.

Their layout are more in line with MSNBC’s graphic’s package, including the use of oversized typography of words such as “Breaking News” or “Hallie Jackson” as a transitional element, but also have some unique elements.

Typically a story headline animates in on a white background using a “typing” effect with an underscore as the last character and then slides to the left of the screen, where it remains in a white box while a two tier headline occupies a larger blue rectangle to the right. The far right of the screen includes the updated NBC News Now bug against a black box.

Correspondent lower thirds include an animated wipe with three horizontally arranged ots that then move the far left of the screen in a stacked layout, making room for the reporter’s name and title.

Roboto, which is also used as a lower third font on MSNBC, is used for longer blocks of lower third text on “Hallie Jackson.”

The NBC News Now logo is a customized version of NBC’s bespoke font Wordmark, which is also used for the MSNBC logo.