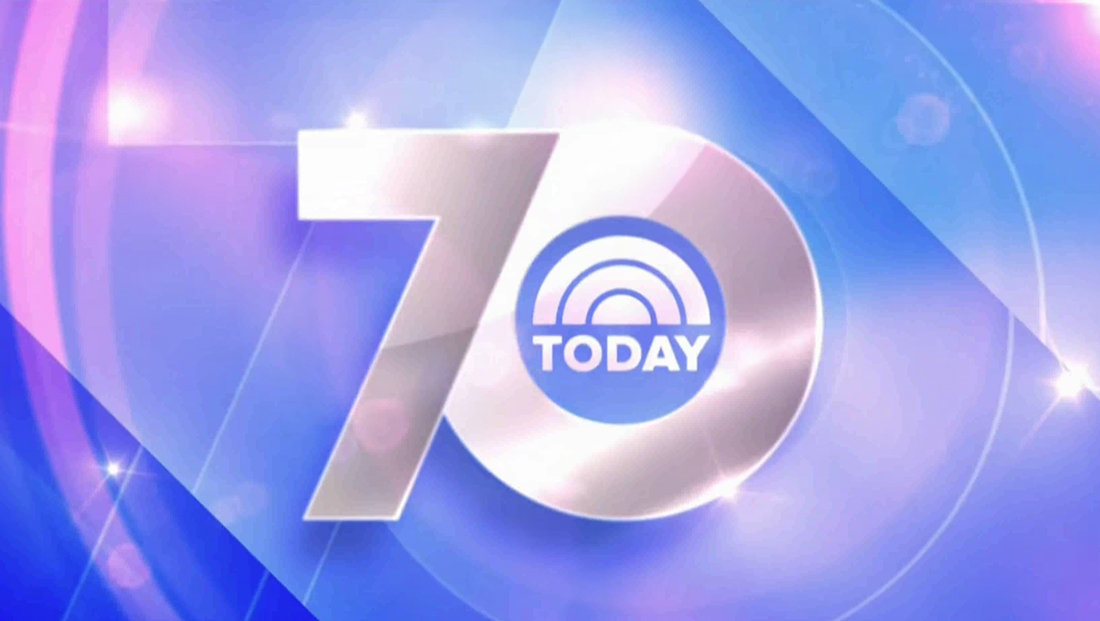 The show’s graphics remained their normal blue, orange and gold for the tease headlines but then switched to the vibrant violet color scheme introduced earlier in the month to mark the big 7-0.

‘Today’ prepares to mark 70 years on the air

The show also featured a different take on its frequent “Today’s Timeline” segment used at the top of the show that makes use of the 40-foot curved video wall in Studio 1A to showcase key points of a major story.

For the occasion, five boxes corresponding with key dates in the show’s history were shown, with the show’s logo at the time shown before fading out to reveal imagery below.

Later in the broadcast, an extended retrospective style package showcased key moments from the show’s history.

There was also a multipart “walk and talk” segment with the in-studio team that took viewers for a spin around Studio 1A and behind the scenes.

The lower third banners were turned to a violet and white color scheme during segments devoted exclusively to the anniversary bash. 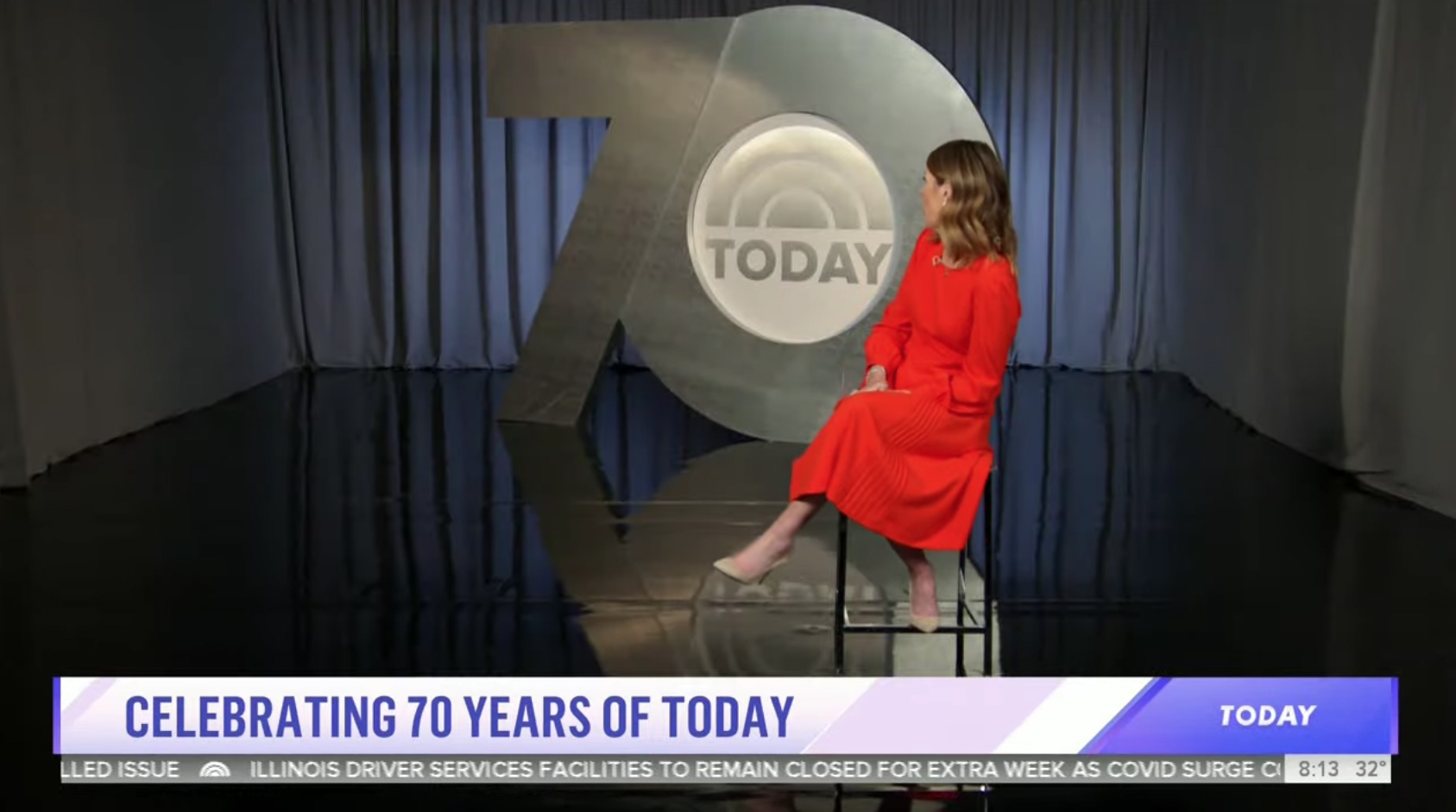 Taped interview segments from the “Today” team for the package were filmed in front of a giant version of the “70” logo set against a draped wall and wide “slip” shots captured through a glass “70” sculpture set up in the foreground.

The larger dimensional logo was also brought out on the plaza outside Studio 1A.

These interviews were mixed in with archival material from the show’s seven decades on the air, going back to its black and white, lower resolution days. Disgraced former co-anchor Matt Lauer also appeared a few times. 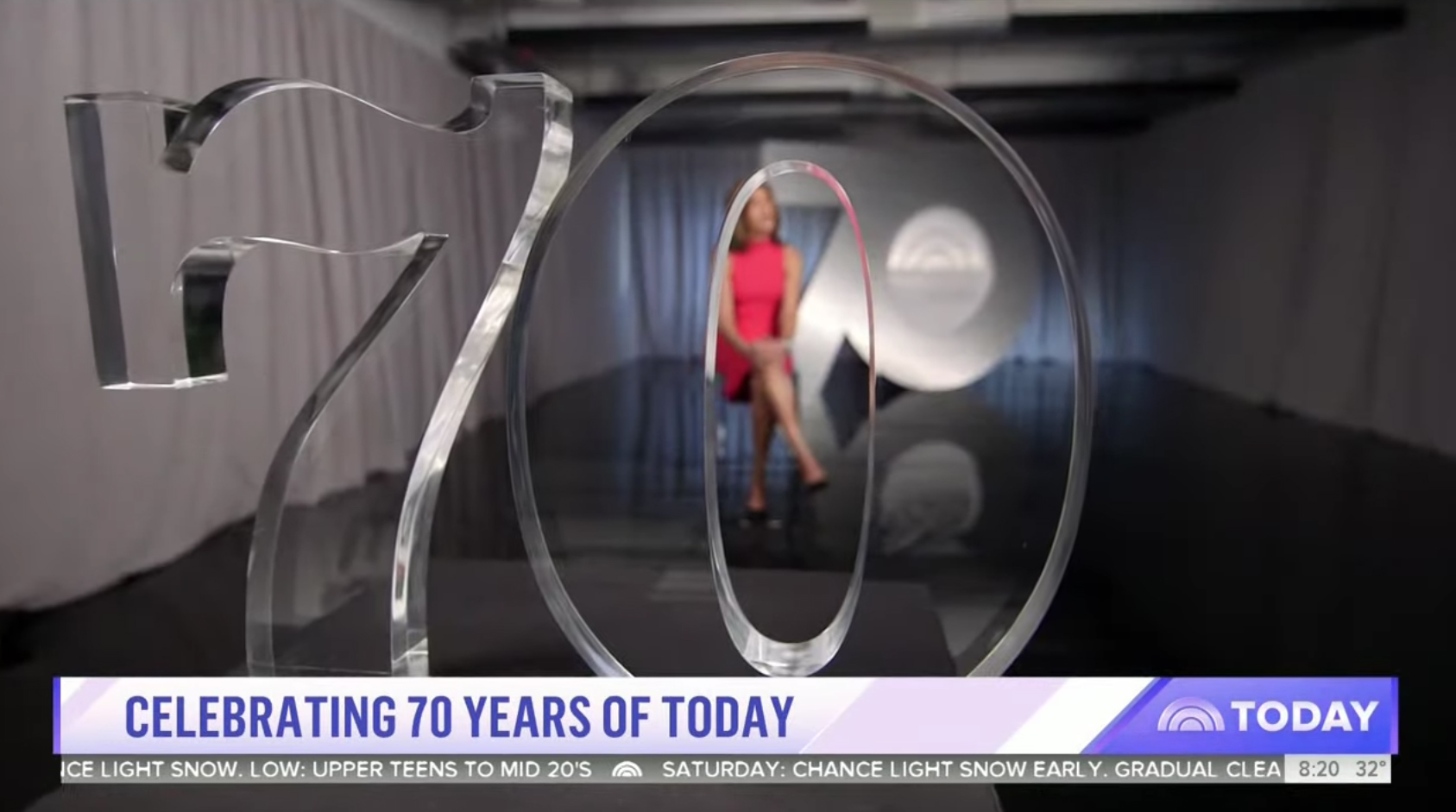 The network wheeled in an actual chalkboard with a pre-printed U.S. map on it and Roker wrote with real chalk to showcase actual conditions. 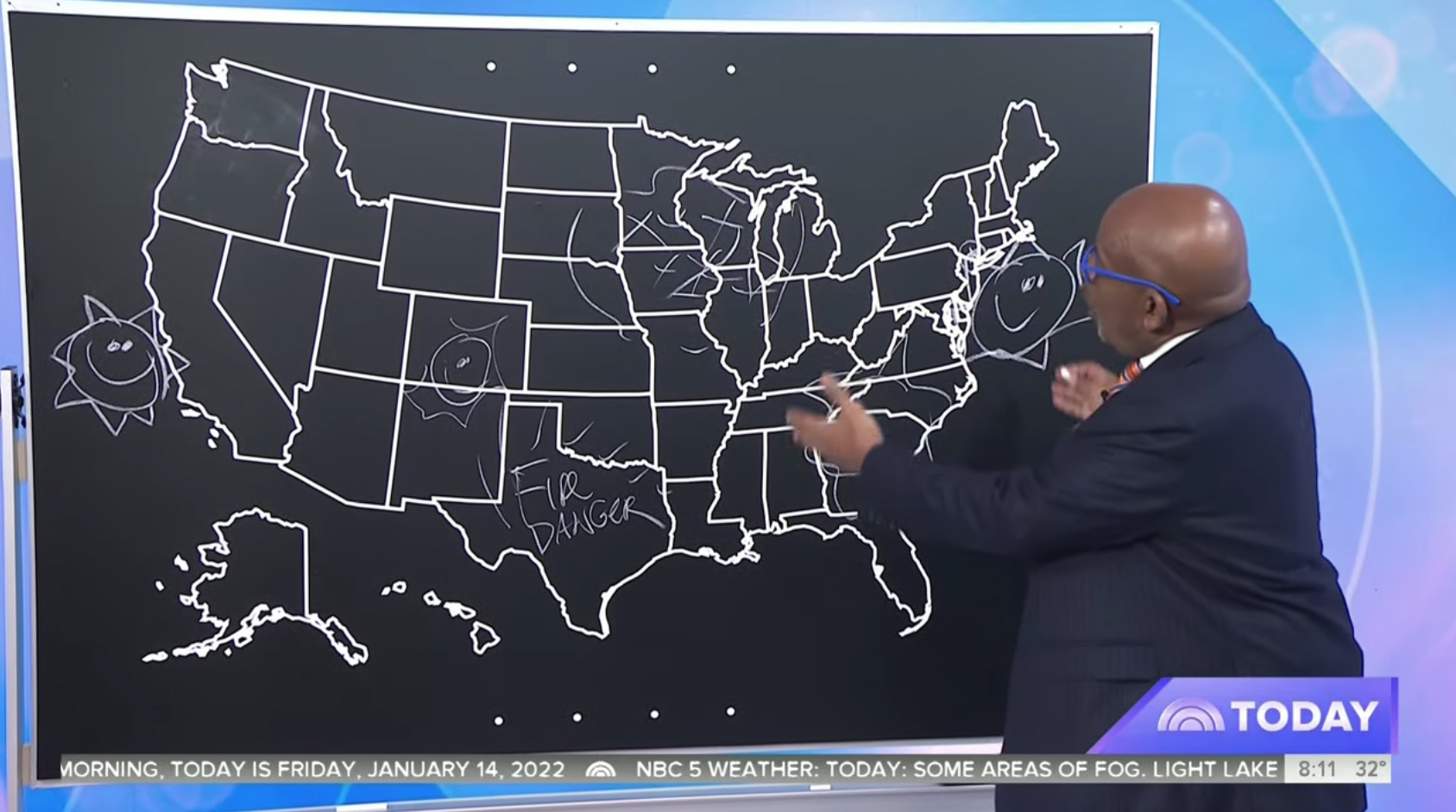 Another segment used the large video wall, one of the wild monitor carts and three prop lecterns to create a “Today Trivia” set up inspired by a game show. 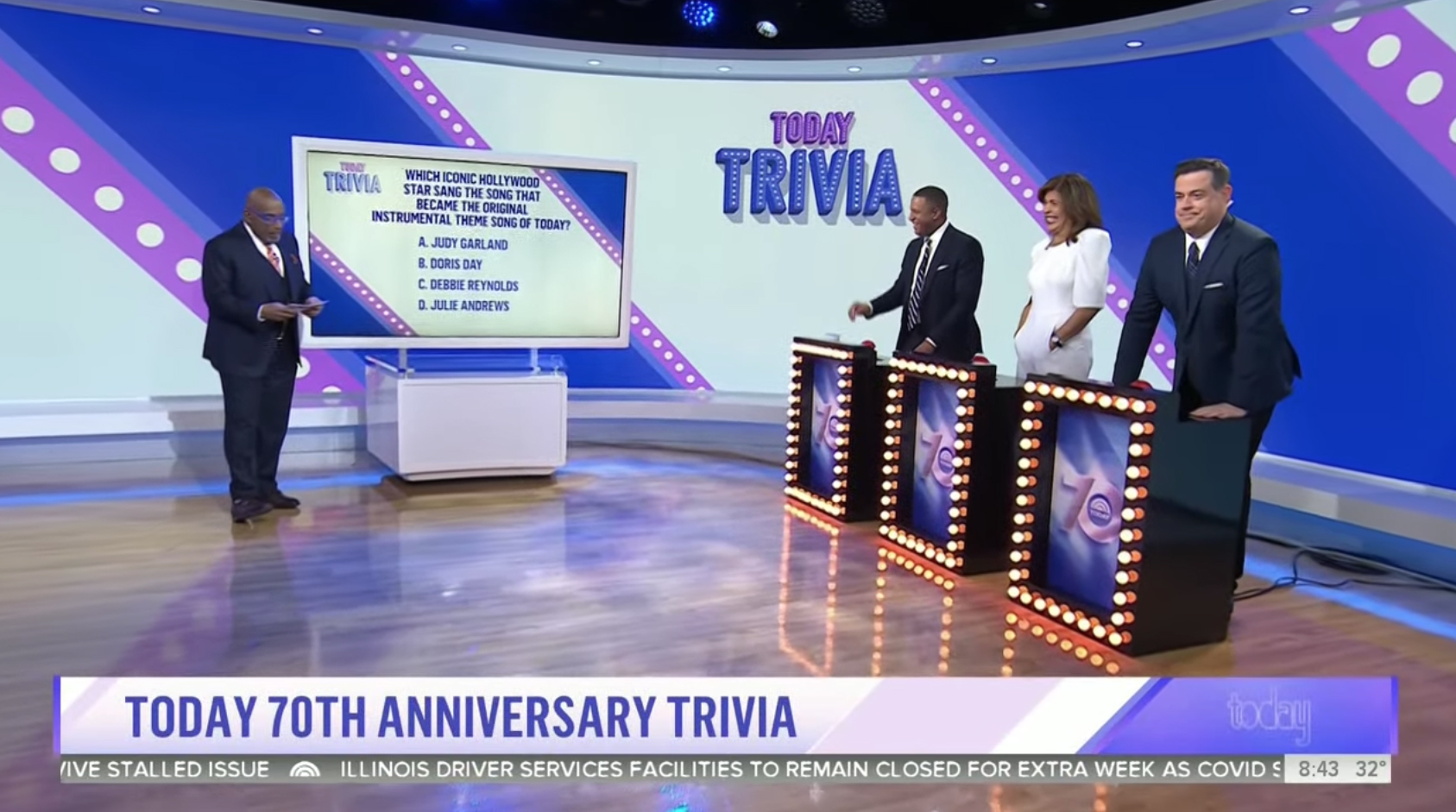 Guthrie is recovering from COVID-19 and shared some of her thoughts about the milestone and toasted — with an empty champagne glass — along with the in-studio team who were gathered around a birthday cake. 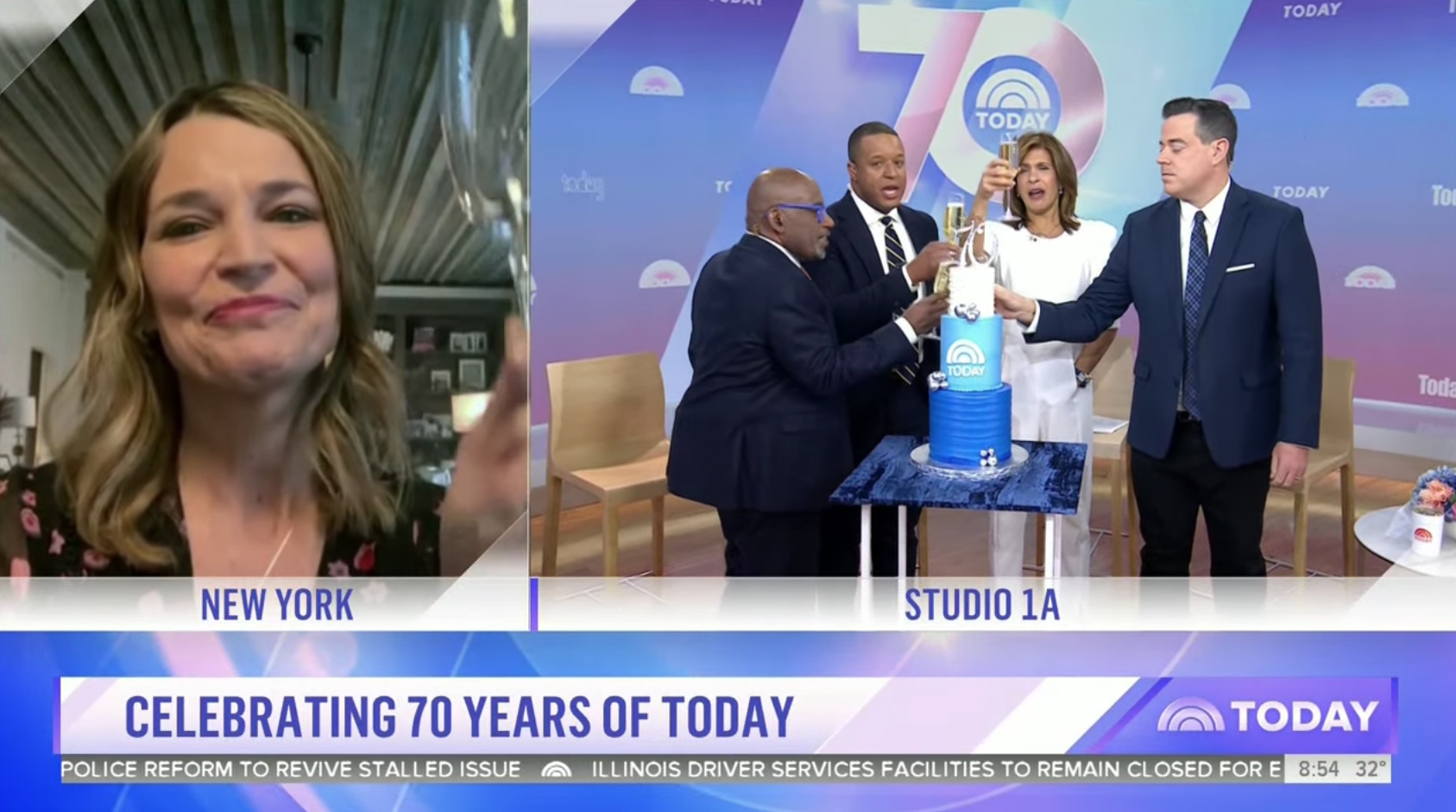 Guthrie co-anchored some shows earlier in the week from home, where the network has a small studio setup installed. Her appearance on Friday, however, appeared to be via a videoconferencing app and not a professional grade video link.

In addition to the on air components, NBC also posted an interactive experience that looks back at the show’s history in more detail. The show also created a “Today” trivia game.