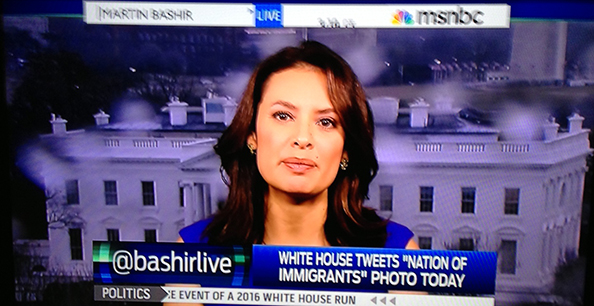 During MSNBC’s “Martin Bashir” this afternoon, guest Maria Teresa Kumar joined the program from a rainy Washington, D.C. for a conversation on immigration reform in front of an interesting background image.

Kumar seemed to be sitting in front of a large video wall displaying a live image of the White House. Because of the weather, large rain droplets appeared on the lens. Because of the scale difference between the image and Kumar, the drops appeared to be huge — even larger than Kumar’s head.

We’ve noted the issues of using a live image on a video wall behind talent before, including a giant bird “attack” that occurred on Australian television.