‘Today’ reddens up graphics for conclave 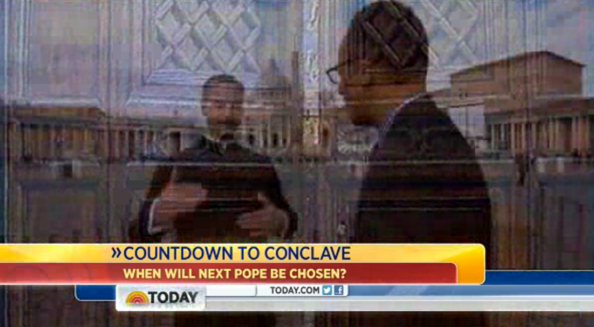 The new look is structurally the same, but trades the two tones of orange for one of gold and one of red, with the type in the lower thirds becomes a royal blue.

With this new color scheme, the first hour of the show’s Monday edition was a hodgepodge of color schemes, with the orange and orange scheme used for some segments, a red and orange palette for breaking news and then this one for its special coverage of the papal election.

While it’s not uncommon for newscasts to recolor their graphics for special coverage or holidays, this application seems a bit odd because it’s not inherently obvious why the colors changed, especially considering the red and gold tones are close to those found in the “Today” logo.

The design could have, for example, added some additional imagery to make it clearer to the viewer that a special topic was being discussed.