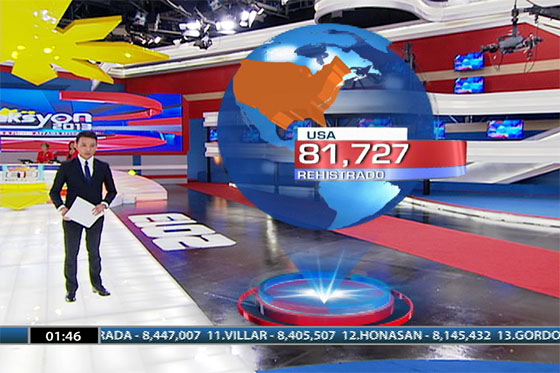 GMA Network, a commercial broadcast television network in the Philippines, led the ratings for its live Eleksyon 2013 coverage on its flagship TV channel GMA-7.

As one of several GMA media outlets covering the country’s mid-term elections, GMA-7 together with its news channel GMA News TV, provided a total of 28 straight hours of live coverage beginning at 4:30am on election day.

GMA News and Public Affairs’ Eleksyon 2013 garnered the most TV viewers of any Philippine network, driven in part by its innovative use of visually dynamic graphics technology from Vizrt. “Our goal was to take our live elections coverage to a whole new level,” said Felipe L. Gozon, GMA Network Chairman and CEO based at the company’s Quezon City, Philippines headquarters. “This investment in Vizrt graphics presentation technology enabled us to incorporate social media buzz about the candidates, colorful insight into the voting process, and comments about key issues into dynamic live graphics to give viewers a richer understanding and perspective of the day’s election results.”

GMA built an immersive two-story 3D Viz Virtual Studio for Eleksyon 2013 that enabled GMA anchors to give their reports while walking around virtual objects such as 3D charts.

The studio was filled with expansive video projections of live feeds from GMA news teams at 47 remote locations nationwide, video packages, and real-time data-driven graphics. There were also hologram effects, such as a dozen senatorial candidates appearing to stand alongside the anchor during live reports from the immersive 3D set.