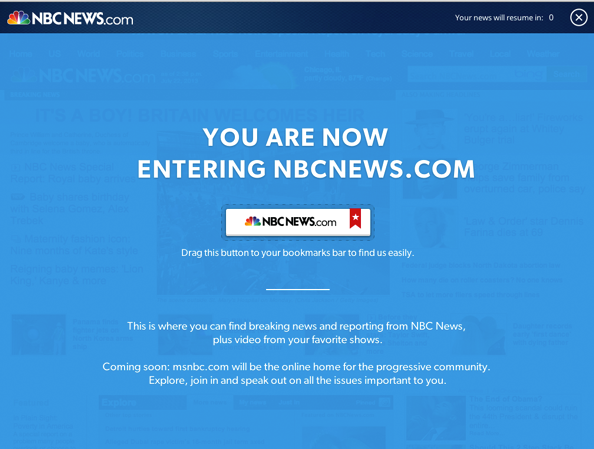 Visitors typing in “msnbc.com” are now being shown a fullscreen message letting them know of the upcoming change of NBCNews.com and msnbc.com becoming separate websites.

The blue page informs users they are “now entering NBCNews.com” and encourages them to bookmark the domain for easy access later.

The page continues by saying:

(NBCNews.com) is where you can find breaking news and reporting from NBC News, plus video from your favorite shows.

Coming soon: msnbc.com will be the online home for the progressive community. Explore, join in and speak out on all the issues important to you.

The prominent message takes over the entire screen for a few moments, but can be skipped by clicking a close button.

The domain msnbc.com began redirecting visitors to NBCNews.com last July (NBC Universal marked the occasion by ordering custom cupcakes with the new name), after NBC Universal purchased the remaining stake in MSNBC from Microsoft and announced plans to rebrand the news oriented website under the NBC News umbrella and eventually creating a new website for msnbc.com.

The websites for MSNBC shows, meanwhile, moved to the subdomain tv.msnbc.com.

Many NBC News shows, meanwhile, including, “Today,” “NBC Nightly News” and the defunct “Rock Center,” have begun the tradition of having their own domain names that redirect to various locations on the NBCNews.com domain. Other networks, including ABC, have also used the dedicated domain name strategy for shows such as “Good Morning America.”