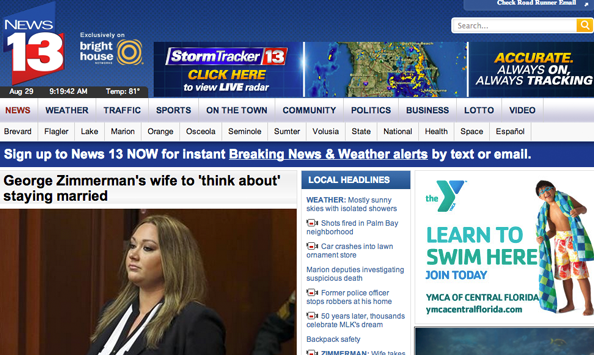 The longtime slogan “All local, all the time” is gone in favor of “News. Weather. Now.”

In addition to showcasing the channel’s news coverage, the new tagline emphasizes the channel’s weather reports, which is big viewership driver in the stormy Orlando area, as well as the live, realtime nature of the channel.

It’s worth noting that the “News. Weather. Now.” slogan is also similar in structure to the market’s NBC affiliate, WESH-TV, branding, which uses a modified version of LLL: “Local. Live. Late Breaking.” (as opposed to the more common version that places “Live” first and “Local” second).

Central Florida News 13 has also changed its weather branding from “Digital Doppler x13” to “Storm Tracker 13,” a change that’s aimed at making it clearer what the radar actually does.

The new logo uses one red and one blue trapezoid that intersect, and is very similar to the logo used by sister Bright House news channel Bay News 9 in Tampa.

The station previously used a orange, blue and yellow logo accented by an arrow in the negative space between the “1” and “3.”

In addition to these more obvious changes, the channel is now broadcasting entirely in 16:9, including its updated graphics package.