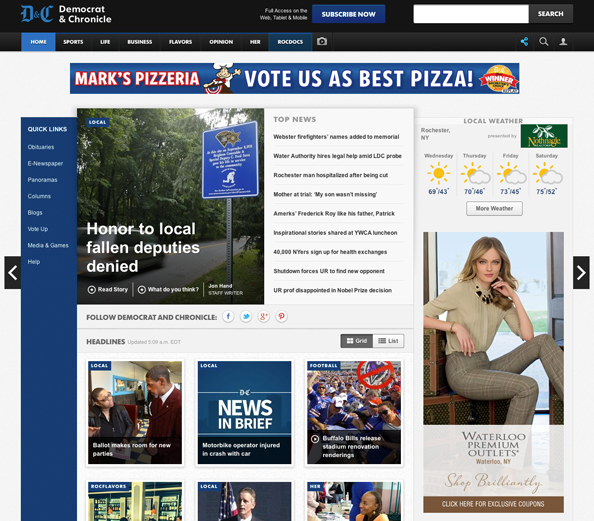 The Gannett owned newspaper in Rochester, N.Y., the Democrat and Chronicle, has switched over to using a website similar to that of its parent company’s signature property, USA Today.

Rochester is one of Gannett’s midsize newspaper markets, making it ideal testing grounds for rolling out a new website look. The websites for some of Gannett’s larger properties, including the Detroit Free-Press and Arizona Republic in Phoenix, remain unchanged as of this writing.

Gannett newspapers and TV stations haven’t traditionally shared similar online looks, with the notable exception of KPNX-TV and the Arizona Republic in Phoenix, which have shared the domain AZCentral.com for years — and is a prominent example of a onetime popular idea to combine local newspaper and TV station websites (even when the properties weren’t owned by the same parent company) and is perhaps the highest profile surviving implementation of this model.

No word if Gannett has plans to expand the USA Today design to other newspaper properties, much less its TV stations, but it certainly could be a good move — giving all of the company’s media properties a cohesive look and taking advantage of the no doubt pricy investment that went into developing the USA Today templates and backend.

In January, when the company rolled out new graphics for its TV group in January, local stations gained a “rundown” under the news ticker with color coding that matched USA Today’s ubiquitous tones and matched the new, simplified look of the publication’s website.

The new USA Today website prominently integrates original video produced by the newspaper as well as repurposing Gannett’s local TV news footage that has some small modifications made to the graphics for online use.