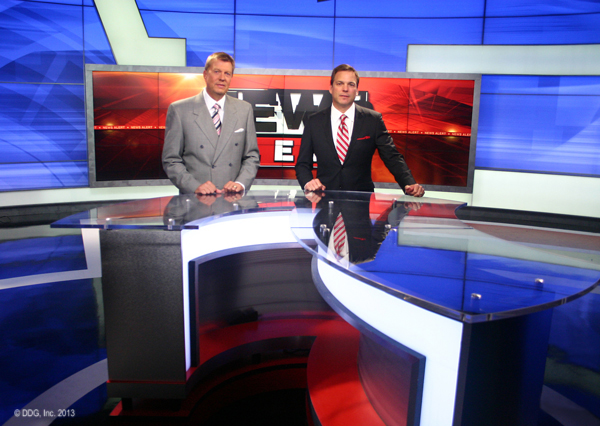 With the debut of KSAZ-TV, Devlin Design Group believes the “paradigm is changing” in news set usage.

“The old paradigm considered sets as a visually interesting, static background to compliment what was going on at the anchor desk,” according to a Devlin news release. “The dynamic environment of this set (KSAZ-TV) keeps anchors engaged and upbeat since the talent is no longer chained to a desk.” With its multiple presentation areas, video wall and color changing backlit graphics; KSAZ-TV has the ability to make every newscast visually appealing.

“Some people might suggest sets don’t drive ratings, but coincidentally, ratings are up for KSAZ-TV since they debuted this set in September,” said Dan Devlin of Devlin Design Group. “One explanation from the people at KSAZ-TV is that the forward leading, interactive design is the spark plug that re-energized and reinvented how the station approaches each program.” “Devlin Design Group is proud to be part of the team that has redefined story telling in the Phoenix market,” said Devlin.