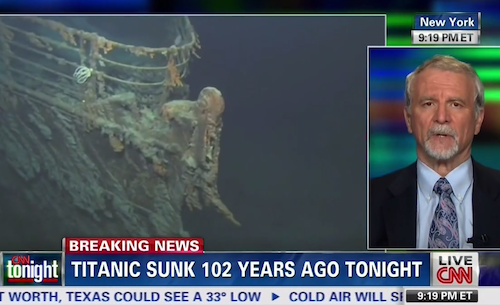 CNN has come under heavy criticism lately for its “smotherage” of stories such as the “poop cruise” and missing jet — but here’s a new one — redefining breaking news as a story that’s 102 years old.

The network aired a lower third banner covering the fact that the Titanic sank 102 years ago today as breaking news.

The Internet, of course, took note.

@WillMcAvoyACN, a parody Twitter account masquerading as the voice of the lead character in “The Newsroom” tweeted out:

So, let’s see. Is there any way to justify CNN’s labeling of this story as “breaking news”?

Well, the story certainly would have been breaking news at the time — but 102 years later kind of defies the definition of “breaking”

You could possibly argue CNN is implying that the sinking itself isn’t breaking news, but rather the fact that it’s the 102 year anniversary of the disaster. Yeah, except we kind of knew this anniversary was coming — for the last 101 years. Pretty sure that also defies “breaking.”

Well maybe something new was discovered about the sinking? Or maybe they found Gloria Stewart’s necklace? Nope and nope.