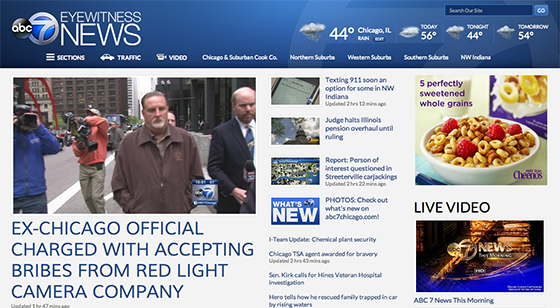 ABC O&O stations debuted a new responsive website design this week. Since it’s responsive, the design adapts to fit all devices including phones and tablets. The columns become a bit too busy on inside page, with the actual story only taking up half of the screen. The fonts all seem a bit too large, perhaps drawing comparisons to Huffington Post-style screamers.

Section fronts are often branded with a subtle background image, including map-themed backdrops for regionalized pages, such as the one from WLS-TV in Chicago shown below. One nice touch is the redesigned weather pages, which include stylized backgrounds depicting current conditions and a horizontally scrolling hour-by-hour forecast feature.

The fonts used throughout are Muli and Lato, part of the Google Font service.