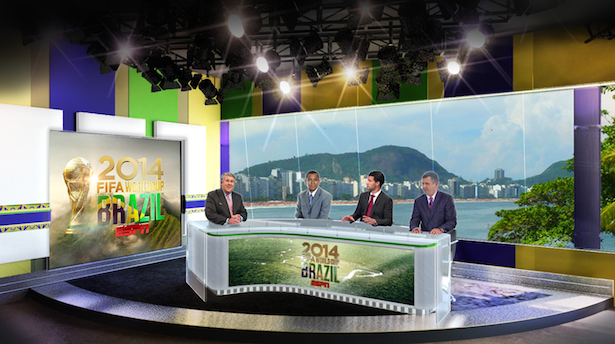 Located at the Clube dos Marimbas boating club in Rio de Janeiro, ESPN’s studios will be used by both ESPN domestic and international networks during the month-long tournament. Noubar Stone, senior creative director at ESPN, spoke with FrontRow about the set design and logistics of broadcasting in Brazil:

On Logistics and Setup

“We have a domestic studio and an international studio. ESPN Brazil will be here at certain points as will some of our other networks. On the third floor of the club is the production floor of the set. Adjacent to that, there’s a room for stand-ups. It has Sugarloaf Mountain in the background. At the rescue station next door, we have a couple of stand-up positions. The two sets we have in the formal studio are roughly 2,000 square feet (1,400 for domestic, 600 for international). The domestic studio has two production areas – a main anchor area that features a curved display in front of the set with a large display over the main anchor’s shoulder. We have a couple of touch screens and another major production area that we are calling the “Last Call” set. This is a much more casual area for the end of the night with Copacabana Beach as the background.”

“We’re building not only the studio but we also have the build (with Claude Phipps and the remote production operations team) and the outfitting of three full control rooms – one for domestic, one for international and another for Good Morning America, which will have a regular presence.”

On the Set Fabrication

“The people building the studio are a Brazilian company. They do Lollapalooza in Sao Paulo. They did the Pope’s visit to Brazil, several different locations for that. This is a custom-build.”