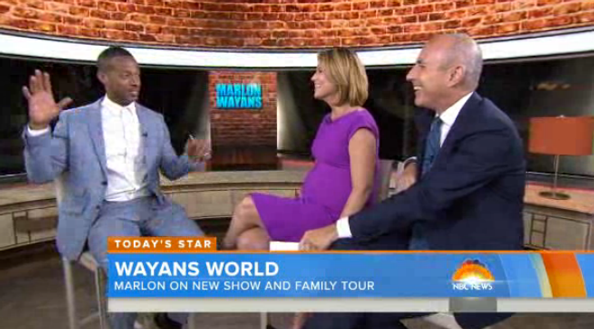 During an interviewing with Marlon Wayans, who was promoting his new show “Funniest Wins,” “Today” opted to pull down the window shades on Studio 1A for a bit of a different look.

The interview included creating a darker, perhaps grittier look with the brick graphics fed to the video header and vertical column in the corner of the studio typically used for home base. The shades not only hid the waving fans from appearing in the background, but also created a bit of a darker mood.

The effect did look a bit odd in some cases, however, because the of strange reflections on the internal filtering glass that, for example, caused the light bulbs inside the table lamps to be visible behind anchor Savannah Guthrie.

Last June, when today was still on its previous set, the show had to keep the moveable blue background in place during a slashing incident in Rockefeller Plaza. At the time, unlike on the current set, “Today” wasn’t able to rotate its anchor desk to use the interior of Studio 1A as a backdrop instead.