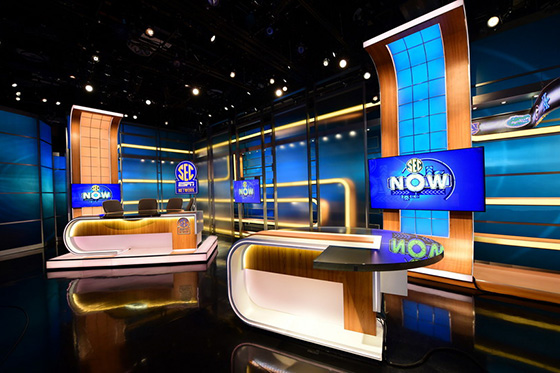 This week, ESPN flips the switch on the newest sports network in America. The SEC Network will cover the 14 schools of the SEC 24/7, beginning Thursday.

View a gallery of the studio on SetStudio At the heart of the SEC Network is ESPN’s Charlotte Production Facility, which has been home to ESPNU since its launch.

“SEC Now,” “The Paul Finebaum Show” and “SEC Nation” will make heavy use of the studios at launch. “It was important that the set had its own distinct look and feel, while still maintaining the quality and technology that viewers have come to expect from an ESPN network,” said ESPN’s Stephanie Druley, vice president production, college networks. “The set is designed to give us three unique environments.”

The sets include a balanced mix of wood, backlit elements and printed graphics with panels to create a blurred effect behind talent. A large desk serves as home base with many presentation points throughout.

Technology has been worked in throughout, with the addition of touchscreen monitors and a LED ticker. A smaller set with a monitor wall has been created for “The Paul Finebaum Show,” a radio/TV simulcast that will air on the network. This set includes two desks and many SEC colored backlit elements.

The overall look is sporty, but different from ESPN, giving the network some distance from its parent.

You can view a full gallery of the studios on SetStudio.