Fox News graphics contradict each other on U.S. strikes against ISIS 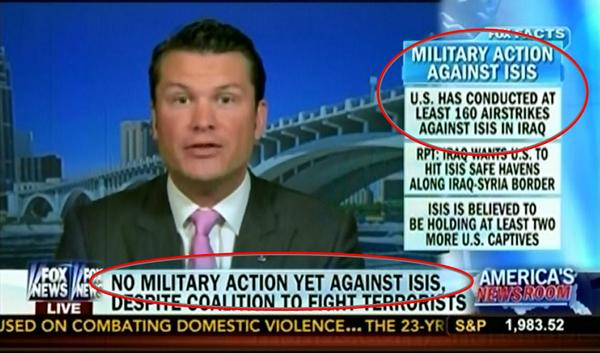 In what might be a lesson that perhaps it isn’t necessary to clutter screens with text, Fox News was caught contradicting itself when it aired a lower third proclaiming the U.S. has taken “no action” against terror group ISIS — while, on the same screen, a sidebar bullet point claims the U.S. has conducted at least 160 strikes.

The error was noted on Twitter by Dorsey Shaw:

During the segment, Fox News managed to cram a ticker, a two line, text heavy lower third and three rather wordy “Fox Facts” running down the ride side of the screen.

With the pure amount of text on this screen, it could be argued that such a blatant contradiction was inevitable…