Yet another new ‘View’ 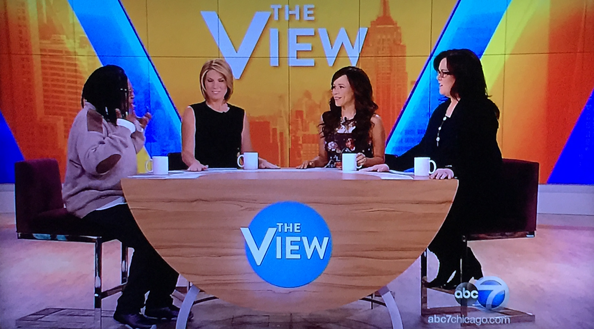 We’re starting to think “The View” should change its name to “The View: For Now, Anyway” given its seemingly endless amounts of changes to its on air look.

The ABC daytime talker unveiled yet more changes to its set and graphics Monday. On Monday’s show, despite what is probably the most drastic change since the new season began just over a month ago, moderator Whoopi Goldberg seemed to indicate even more changes might be coming, referring to the updates a process and evolution.

The newest version of the show makes use of bright blue and orange and replaces the “transition” desk with a larger version that’s now wood toned instead of the off-white used before. The new desk also includes integrated chin fill lighting, something the hosts seemed quite excited about Monday.

The show’s logo has also shifted from a teal tone to be more in the blue family while the chairs have also changed to more modern, dark cushioned pieces with metal L-shape legs that are similar to what was used on the previous set.

The show’s large video wall has been switched to use vertically-oriented panels (similar to what is used on “World News Tonight”) while eliminating the paneled structural accents beneath it. The set’s columns are also gone and the backlit panels are illuminated in yet another color scheme.

The set also now includes a vast riser with three steps with accent lighting — creating an almost futuristic look. The set’s left and right sides have eliminated much of the furniture that was there originally, a change that really removes a lot of the depth and texture the original set had.

The show’s hosts no longer enter from the rear of the studio but instead enter camera left. The new arrangement requires a camera operator to run out directly in front of the video wall to capture closeups of the hosts as they enter and greet the audience — and on Monday’s live edition a stagehand who didn’t leave the set quite fast enough was caught in the background behind Rosie O’Donnell.

The show debuted a completely new look and radical departure from its longtime logo and graphics when it began its new season in September.

At the time, the show retained it desk with a curved leaf emblazoned with the show’s logo  in the form of a lower coffee table-style piece that sat between the hosts, who sat on low armchairs. The show also traded out its logo’s narrow font for a wider, softer look that added a teal circle.

The colors changed again for the first day of Breast Cancer Awareness month and a new, larger desk with cushioned stools that looked straight off a tacky furniture showroom floor came next. The show also continuously changed the colors of the set’s backlit panels.

Throughout all the changes, Goldberg continued to hint that more changes were coming — and at times seems to indicate the hosts weren’t happy with the new look.

What’s next remains to be seen, though it wouldn’t shock us if the show just gives up on having much of a set and throws up two additional video walls on the left and right to give the show a similar appearance to its previous studio.

That studio, located in a different building, had a set that was first installed in 2011 that also featured more structural elements that were eventually removed in favor of a set that basically consisted of three rear projection walls.