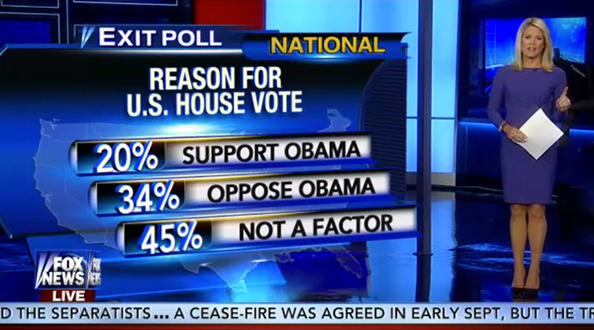 Over the past few years, we’ve seen full virtual and hybrid environments become a pivotal part of broadcast and cable election coverage — but that trend appears to have taken a bit of a step back this year along with a more restrained approach to hard sets.

Only Fox Business, BBC World News and CNN made use of fully virtual environments during Tuesday’s coverage — and, despite CNN’s love of gimmicks and tech toys during elections (remember the 2008 holograms?), CNN only used its virtual setup briefly.

The remaining networks used hybrid solutions to insert graphical data into their hard sets, with NBC and MSNBC opting out of even that. On Fox News Channel, virtual graphics were inserted into its “America’s Election HQ” set, including the poll data shown above, which served as a sort of giant OTS. The floor in front of the studio’s main anchor desk also was used to show viewers map-based graphics. Fox Business uses its virtual studio to illustrate the balance of power in the U.S. Senate

Over on sister network Fox Business, a fully virtual studio was used to place on air talent into various maps and charts, including the “balance of power” design shown above. On CBS News, a small hard set was used to present polling data, with bar and other charts floating in mid air in front of the talent. This was perhaps the most impressive use of realtime graphics in that it took full advantage of both realtime camera tracking and layering imagery in front of talent in the virtual plane. Its graphical look also used softer colors that complemented the hard set and Studio 57 well. BBC World News, meanwhile, also used a full virtual environment. Its approach differed from Fox Business’ in that it tried to replicate structural elements using the computer systems. Where Fox Business placed people in an ambiguous space made up mostly of textures and 3D elements that didn’t attempt to look like real scenery, BBC attempted to recreate its rounded studio look and feel while also incorporating floating maps.

One nice touch on BBC America was the arch used to illustrate the power balance in the Senate — an element that tied nicely into the rest of the graphics package, which featured rings of stars and colored ribbons.

As it did last election, NBC and MSNBC sidelined virtual technology, instead choosing to use real touchscreen monitors.