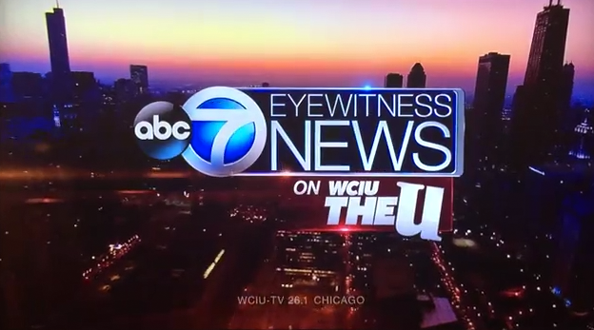 WLS-TV, the ABC O&O in Chicago launched a new 7 p.m. newscast on Weigel Broadcasting’s independent WCIU-TV this week and along with it came a heavy hitting new open.

For the new open, ABC 7 is using a cut with a decidedly heavier beat. The same announcer is used, though the “Chicago’s Number 1 News” line is eliminated from the voiceover and only shown on screen.

WLS-TV uses Gari’s Stimulus package for the newscasts that air on its main channel.

The graphics in the open remain largely identical to the ones used by ABC 7, with the addison of a red gradient on the lower right side of the Eyewitness News logo that serves as a holding spot for WCIU-TV’s logo.

The newscast is branded as “ABC 7 Eyewitness News on the U,” reflecting the station’s longtime branding as “The U,” a name taken from the last letter in its call sign.