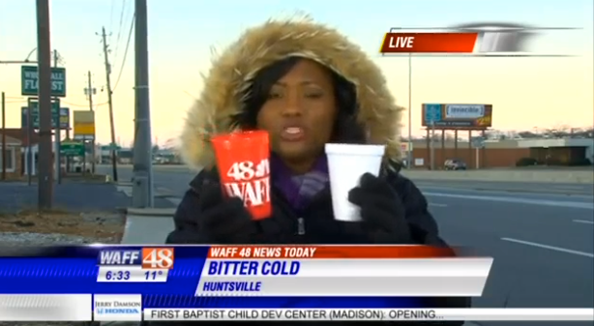 Many reporters have had one mantra drilled into their heads by news consultants and coaches — your live shots and standups are better if they are active, illustrative and include demonstrations.

That doesn’t, however, mean you should pander to your audience by showing them that water, does, in fact freeze when it’s below freezing outside.

But that’s exactly what WAFF-TV (Huntsville, Ala.) reporter Muriel Bailey (we love that name!) did with her live shot during the station’s morning news.

Not only that — Bailey felt it was necessary to show what happened when two cups filled with water — one foam and one plastic — were left outside, though she failed to enlighten viewers on what happened differently, if anything, with the foam cup.

Bailey also managed to sneak in a reference to another favorite topic of TV news — tips on how caring for pets during cold weather, by mentioning that owners should check to make sure water bowls left outside aren’t frozen over.

And, just in case there was any doubt, from a scientific perspective, the station’s time and temp bug conveniently reminded viewers it was 11 degrees outside (which, last time we checked, 21 degrees below freezing).

Bailey also posted multiple photos of her cup experiment on Facebook, but that post appears to have been removed.

In fairness, Bailey was given pretty much the worst assignment ever — to go and cover cold weather for the morning news, which is basically a fancy way of saying go stand outside, look cold and tell people how cold it is over and over again all morning.