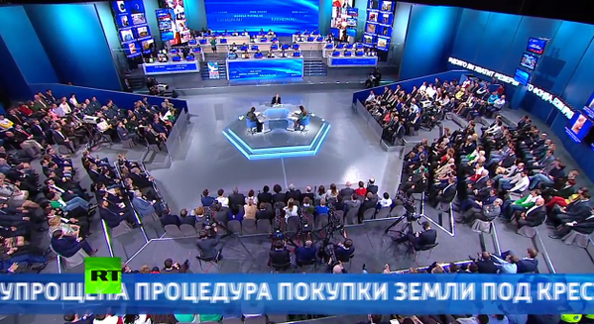 RT, a state funded television network in Russia, just wrapped up broadcasting a marathon live question and answer show with president Vladimir Putin that originated from a massive “theatre in the round” style set that borrowed from several different layouts.

The network produces coverage of the call in show every year, which received thousands of inquires via social media, phone and other channels, which typically lasts several hours. For this year’s broadcast, as in year’s past, a theatre in the round type design was used with seating risers for an in-studio audience as well as a work area for staffers who fielded questions and ultimately decided which made it on air.

This year’s set was dominated by bright blue and teal tones as well as a more subtle gray shade. Putin and the broadcast’s moderators sat on a hexagon-shaped riser with similarly shaped horseshoe-style desk in the center of the studio.

The desk itself was rather chunky, and also seemed to situate the moderators rather farm from Putin, who also had access to a laptop at his position.

While one shots on the two moderators showed audience members in the background, Putin was situated in front of a video wall that displayed an animated loop.

On either side of this wall, a short flight of stairs ascended to a raised glassed-off work area. Here staffers sat, facing the audience, at rows of desks. Each workstation was double-sided, with one monitor facing the person sitting at the desk and another facing the audience risers. These monitors frequently contained webcam video of people, creating the illusion that the work area was sort of virtual riser area for remote citizens, as shown above. While certainly a creative way to visual “transport” callers into the studio, the effect also had a bit of an odd look at times, especially when the heads of the people sitting behind the workstations were visible.

Behind the work area were additional video walls, stacks and arrays that were used to display photos of people.

The in-studio audience area, meanwhile, was flanked by darker and dramatically down-lit walls but also included some additional video walls and stacks, which were used in a similar manner. In addition, a ticker-style band extended from one side of the audience area to the other, while the configuration of the risers roughly followed the hexagon shaped riser that they faced.

Together these elements formed a set that combines the elements of an American-style debate set, town hall meeting layout, panel show and a PBS pledge drive.

In the past, as shown in the image below, a similar basic layout was used, though in this example the audience area was more condensed and the work area was split in two, one on each side of the audience area.

On this set, workers on one side sat behind workstations reminiscent of a space program’s mission control, while the other side had freestanding, individual workstations fronted with a monitor in a design perhaps inspired by an old-style teletype machine.

The ticker and video walls were used on this set as well, while Putin sat an even larger U-ring shaped desk that positioned the moderators even farther away.