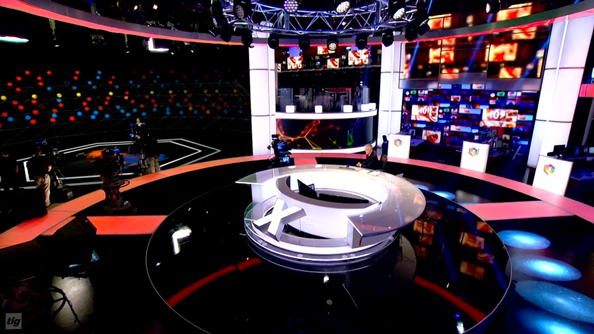 BBC showed off its 2015 election digs — a expanded and slightly spruced up version of the ones used in years past.

The set forgoes the BBC’s typical clean lines and red color scheme and instead mixes in collage-style backgrounds that mixes in blues and purples.

A bit of the traditional BBC look is found in the backlit red headers and columns that surround the circular shaped set.

An internally lit, horseshoe shaped anchor desk in the middle that allows for multiple hosts and commentators. The Election 2015 logo, meanwhile, features a hexagon shape filled with a myriad of colors with an “X” in the middle — a graphical element that’s mirrored in the dimensional element propped up in front of the anchor desk. The polygon theme is carried out through some of the graphics used — with interconnected dots forming a sort of abstract map.

In addition to the main anchor area, the network has added an elevated interview area that’s wrapped in a curved video wall. On the opposite side of the studio, meanwhile, is an area that will used for additional coverage leveraging virtual realtime graphics.

In addition to the indoor areas, the BBC has installed a giant map, segmented into individually-wired hexagon shaped tiles, in a courtyard at its Broadcasting House headquarters, though most of the coverage will actually originate from elsewhere.