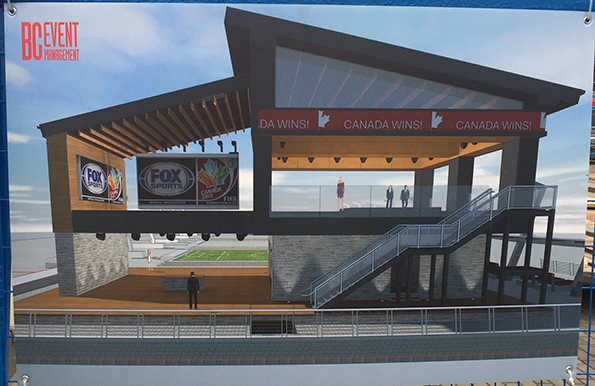 NewscastStudio’s Editor, Dak Dillon, is traveling in Canada this week and took a quick look at the temporary setup for the upcoming 2015 FIFA Women’s World Cup, which begins June 6 on Fox Sports and CTV/TSN.

Fox’s main studio is being constructed next to the Vancouver Convention Centre on the harbour. The two-story structure will include a miniature soccer field, anchor area, interview lounge and giant LED screen. JHD Group is working with Fox Sports on the studio.

Interestingly, the set is located directly in front of the former Olympic flame, used during the 2010 Winter Olympics in Vancouver. Fox Sports secured the World Cup rights in late 2014, taking them over from ESPN. This will be the broadcasters first major soccer event and a good test run before the 2018 World Cup in Russia.