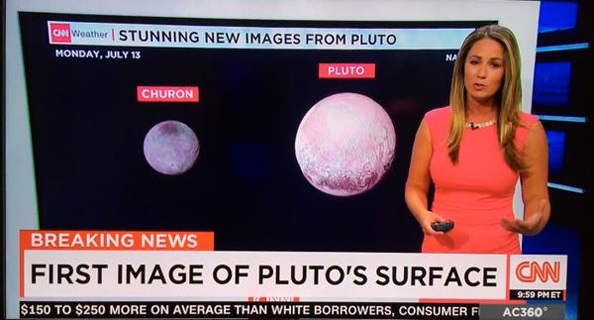 CNN has already taken liberties with geography — including “changing” Pennsylvania’s name to New York and moving an entire country to a different continent — but, apparently not satisfied to let its confusions be confined to Earth — the network is now tackling the solar system.

During the network’s “Anderson Cooper 360” coverage of NASA’s Pluto mission, correspondent Jennifer Gray repeatedly referred to Pluto’s moon Charon as “Churon.” The map on the video panel behind Gray also made the same error.

In addition, Gray also helpfully pointed out that Charon’s atmosphere is primarily made of “nitron.” Just in case you don’t have your periodic table handy, there’s no such element — Gray meant to say “nitrogen.”

Hey, CNN: Just for future reference for when you decide to take on the galaxy — Earth is located in the Milky Way galaxy. Not the Hershey’s or Three Musketeers galaxy.