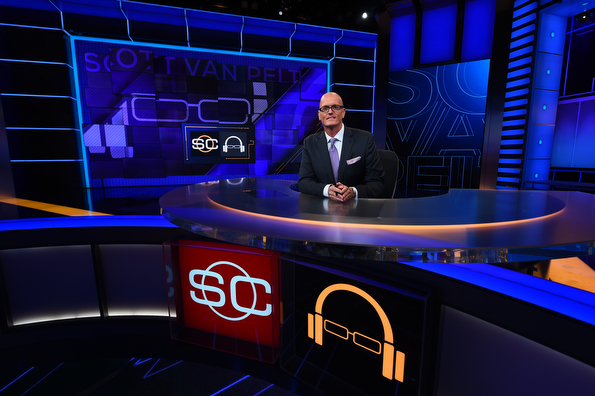 The late night edition of the iconic sports show broadcasts from the same Studio X by Jack Morton PDG, but with a darkened color palette for the sets various backlit elements.

A new semi-circle desk has been added to the studio that allows for interviews and more interaction in the show. The desk, placed on a riser with Van Pelt’s initials, matches the new “late night” feel of the show while avoiding typical cliches of the genre. Graphically, the show opening titles featured a remixed version of the theme with scenes mixing the flat style of the current Troika graphics with 3D scenes of Van Pelt. The opening travels through Hollywood, Las Vegas and a music studio, ending on the “SportsCenter” logo mixed with Van Pelt’s personal identity. This is not the “SportsCenter” you might be use to, but a laid back show with a different vibe, nixing the endless replay loop. As SI.com writes, it’s an attempt to help circumvent the franchises stagnation amid a sea of competitors (namely Fox Sports 1).