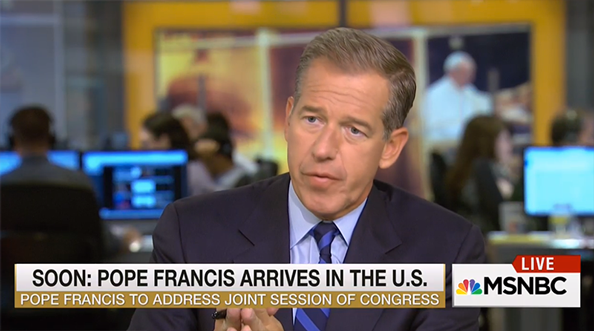 In the much anticipated return of former “NBC Nightly News” anchor Brian Williams coinciding with the first visit of Pope Francis to America, MSNBC has opted to use a gold color as the unifying graphical element of its coverage. For the occasion, the color changing elements on the MSNBC set have been changed to a gold tone — and many of the on-set monitors have been switched to showing topical imagery and graphics. The main backdrop for Williams is the faux “window” MSNBC created using a flat panel monitor array. Normally this video wall, which is where a window used to look into the Studio 3A set of “Nightly,” shows a skyline, but for the Pope’s visit coverage, the network has opted for relevant stylized photos.

The many looks of Brian Williams’ sets, logos: A retrospective In addition, the lower thirds now have a gold border on them and graphics such as boxes have taken on a gold-toned background that’s borrowed from the full screen “Pope in America” graphic. Notably, MSNBC is also adding a unique locator line graphic in the upper right of the screen that doesn’t match its normal graphics package. This design features an uneven gold edge and serif typeface.