The many looks of Brian Williams’ sets, logos: A retrospective 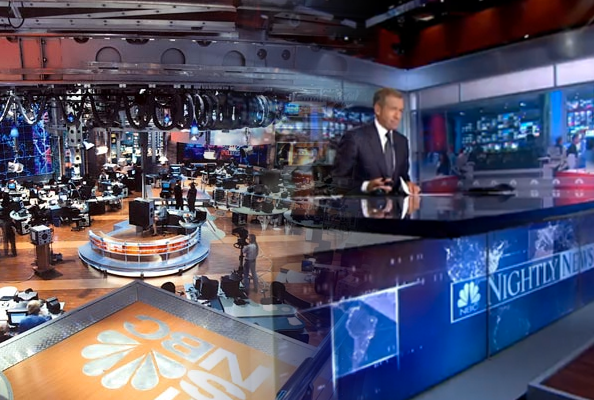 In his first official assignment since returning from suspension over six months ago, NBC News anchor Brian Williams will debut as the new breaking news anchor of the network’s sister cable channel MSNBC.

NBC has done some updates and modifications to its studios for Williams — which are expected to debut in the coming days and weeks.

In the meantime, here’s a look back at the studios, sets and logos Williams has used during his long — and sometimes turbulent — tenure at NBC.

‘The News with Brian Williams’ era

Starting in 1996, Williams anchored what was then MSNBC’s flagship newscast — “The News with Brian Williams.” Originally airing at 8 p.m. from the MSNBC Secaucus studios, the show would eventually move to 9 p.m. in 2001. When the network first debuted on July 15, the studio — which NBC hailed as the largest working newsroom in the world at the time —wasn’t quite finished, so instead of the main anchor desk that would become a signature of the network’s time in Secaucus, programming originated from an L-shaped desk nearly identical to the newsroom’s standard workstations placed on a riser.

Once the network was fully up and running, Williams would anchor the newscast from the newsroom’s main anchor desk in the center of the working newsroom studio.

The anchor desk itself included both laptop and desktop computer workstations as well as a low credenza behind. Together, these surfaces were configured in a horseshoe-shaped arrangement.

MSNBC’s main anchor desk also included a vertically mounted 4:3 tube monitor on a hydraulic lift mechanism that allowed it to be lowered behind the anchor for either an OTS or live shot toss. At other times, the monitor would be raised up toward the ceiling during bumps.

The desk riser as well as a camera, some lighting and an OTS monitor was capable of rotating simultaneously or separately.

Eventually the network upgraded the clunky tube monitor to a flat panel.

“The News with Brian Williams” also had a circular logo with concentric rings in the warm, contemporary colors the network was known for at the time. The words “The News” appeared in small caps in silvery letters, with William’s name on one of the rings.

The logo was eventually updated to a more blocky format: The MSNBC set also underwent updates from time to time, including a large one in 2002 that saw a new anchor desk, updated on-set graphics and some cosmetic changes.

Meanwhile, since Williams was Tom Brokaw‘s main substitute, on weeknights when Williams filled in for Brokaw, “The News” would originate from the “NBC Nightly News” set in Studio 3C in Rockefeller Center in Manhattan since it wasn’t practical to shuttle Williams from New Jersey to New York City in the short time between the second feed of “Nightly” and the start of “The News.” Since that set included multiple video walls, it was easy to simply feed “The News” graphics to them for an almost seamless look. When Williams took over for Brokaw on Dec. 2, 2004, the newscast continued to originate from the same set Brokaw had used, with some minor updates here and there.

At the time, the show also inherited the same logo that was used when Brokaw left — the words “Nightly” and “News” stacked in an elegant serif font, the NBC peacock placed to the left of “News” and Williams’ name below.

The broadcast originated from the Brokaw-era set for several years, until it relocated to the “Football Night in America” set in Studio 8G while the third floor of Rockefeller Center underwent extensive renovations. During this time, the show took advantage of the set’s large video walls to show a control room video loop.

By this time, NBC had decided to pull MSNBC out of Secaucus and relocate it to a shared facility at 30 Rock, a move that cost the network millions in lost tax incentives. The new combined studio debuted in 2008, with “Nightly” relegated to a rather small windowed studio (still dubbed Studio 3C) on one end of the space.

That set utilized two primary backgrounds behind Williams: a window view of the newsroom and a large rear projection screen. A third, though little used background, included backlit graphical panels with a collage of past NBC logos.

Overall, this set was a bit cramped but still served “Nightly” well. At times Williams would even ventured out into the newsroom area for segments.

With the new set came a modified logo — instead of being stacked, the logo now become very wide with the peacock and show name on the same line. Stylistically, the show kept the same typography and boxy-look. The anchor name moved down to the lower right of the logo in a sort of “tag.” Then, in October 2011, “NBC Nightly news” relocated down the hall to Studio 3B with a sprawling new set shared with the now-defunct “Rock Center.”

The set retained much of the previous studio’s look and feel — including the rich wood tones and sleek metallic surfaces. In fact, in many ways, NBC basically mirrored the set in Studio 3C (albeit with a flipped layout).

Instead of the window looking into the newsroom, which would be a physical impossibility now, a video wall showed a video loop of a similar view that could be seen on the old set. The rear projection screen on the 3B version of the set was taller (whereas the 3C version was wide but not very tall due to a lower ceiling height).

But, all in all, NBC seemed content with the look of the “Nightly News” set and wanted to, for the most part, keep that around despite switching studios.

Meanwhile, NBC gutted Studio 3C, covered up the window overlooking the newsroom in favor of a flat screen array and converted the studio to the main news set for WNBC-TV.

During the period “Rock Center” was on the and air and after parts of the “Rock Center” side of the studio would show up from time to time on “Nightly” — namely behind correspondents brought into the studio for debriefs or during special segments.

The “Rock Center” side of the studio, meanwhile, saw changes as the show struggled to find an audience, most noticeably the sofa area being eliminated in favor of a plain riser. Then in September 2014, “NBC Nightly” news flipped sides of Studio 3C and began originating from a corner of the set originally designed for “Rock Center.”

This new location allowed “Nightly” to make use of two wide rear projection walls as its primary backgrounds. These walls, which continue to be used today, are used for topical graphics as well as a video loop of the NBC Los Angeles newsroom and branded world map graphics.

With the switch, NBC eliminated the carefully installed glass that had been placed in front of the rear projection screens for “Rock Center” that added subtle reflections to reinforce the idea that the studio had “windows.”

Upon switching to this part of the studio, the lanterns above this area were removed, as was the glass installed in front of the rear projection walls. Meanwhile, the faux staircase was removed and replaced with a flat panel video wall that mimicked the look of the “window” on both the 3B and 3C versions of the set.

Later in 2014, the Studio 3B would see an eye-catching new anchor desk used temporarily for election coverage.

When Williams was suspended and later removed as anchor of “NBC Nightly News” for inaccuracies discovered in his reporting and comments made in public interviews, the network installed weekend anchor Lester Holt at the anchor desk — which has since maintained the same look and feel as when Williams was anchor.

Through the move to 3B and Holt’s appointment as anchor, the show retained the same logo — though obviously changing out names.

Producers have continue to experiment with wider camera shots and dynamic push-ins as well as different graphics on the rear projection screens, but the overall look has remained the same.