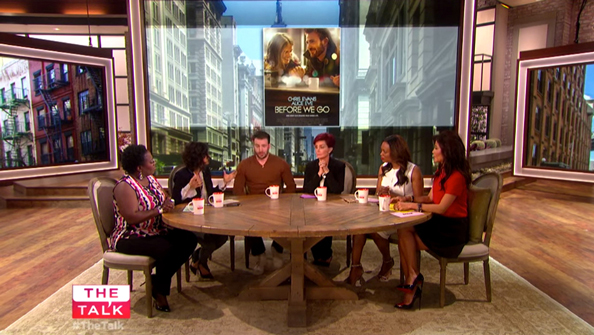 CBS‘s daytime talker “The Talk” debuted some major updates to its set this season, which give the show wide flexibility. The show, which has been rivaling ABC’s venerable “The View” in the ratings (and many see CBS’s show as a knockoff of the ABC one), is moderated by former “Early Show” news anchor Julie Chen along with a panel of other hosts from an L.A. studio. JHD Group designed the original “Talk” set.

For its new season, the show has kept the core of its open, loft-style set, but dumped the little used sofa area and obscured much of the faux windows on the set with suspended video screens. The screens, which also feature frames equipped with accent lighting, are suspended from the ceiling using heavy cables and can also be raised up, a feature that is used for the hosts’ entrance.

Interestingly, utilizing video walls in favor of scenic walls is an approach favored by “The View” — especially during on its pre-2014-2015 season set continuing to its current set. The updates give the show much more flexibility for incorporating topic graphics and even quasi-scenic elements behind the hosts, including animated backgrounds, landscape photos and more.

The accent lighting in the frames is also color-changing, which gives additional flexibility.

The show has retained its large, rustic wood table, which still manages to complement the more modern look video walls. When the table is moved out of the way, other parts of the set can still be used for other segment formats.

CBS, Julie Chen, the early show, The Talk, The View