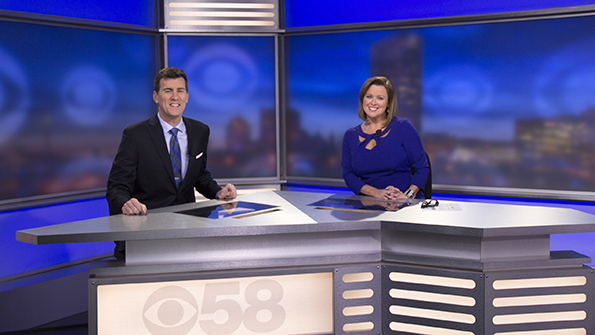 “Our new set and the technology are unlike anything seen in and around the Milwaukee market,” said Mark Strachota, VP and GM of CBS 58, on the station’s website. “We are thrilled to be the first to present this new and visually interesting approach to local news.”

The anchor desk neutral anchor desk features many angles and is fronted by the stations logo. Behind, a blurred out image shows the Milwaukee skyline dotted CBS logos. Throughout the set, backlit rounded metal cutouts are repeated, including on the desk and walls.

“The entire news team is excited. The versatility of the set gives us flexibility and focus in delivering news to our viewers each and every night,” said Tracy Davis, news director at CBS 58.

Backlit panels allow the whole set to change between dayparts, from orange to blue, or for special coverage. The stations newsroom was also updated, matching the styling of the new set, creating a seamless integration of the two.