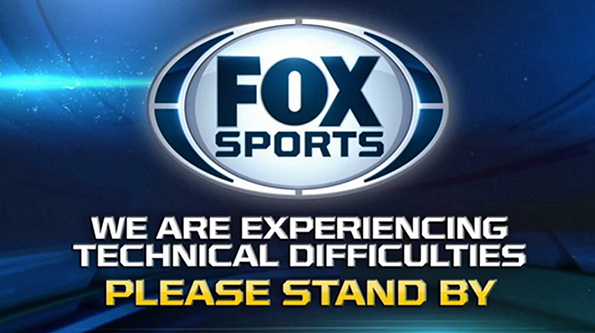 The World Series was sidelined by an outage at the Fox Sports production truck, causing the network to lose its broadcast feed at 9:19 p.m. ET.

After a few seconds of dead air, Fox flipped to its broadcast center in Los Angeles, where “Fox Sports Live” host Dan O’Toole quickly tried to cover with commentary. The game, between the Kansas City Royals and New York Mets, was stopped, as the replay system could not operate. After a discussion between managers, the game resumed at 9:29 p.m. ET.

The world feed, produced by MLB Network with announcers Matt Vasgersian & John Smoltz, was not affected by the outage, prompting Fox Sports to cut to its feed after play resumed.

A reporter for KOMU-TV tweeted a video showing the production truck after the blackout.

As one of Fox’s marquee events, Fox quickly took over the world feed, moving its announcers into the booth, replacing Vasgersian and Smoltz with Joe Buck and Harold Reynolds. Graphically, Fox had to rely on the MLB Network broadcast package, loosing many of its enhanced features.

Fox Sports has issued a statement about the issue:

“Before the start of the bottom of the fourth inning of tonight’s World Series Game 1, a rare electronics failure caused both the primary and backup generators inside the FOX Sports production compound to lose power. The issue was immediately addressed, although it resulted in the audience missing one at-bat during the time needed to switch to carriage of Major League Baseball’s international feed, powered by a different generator on site. The on-field delay was due to replay capability being lost in both team’s clubhouses. We apologize for the interruption in tonight’s coverage and are working to ensure that the remainder of the World Series is broadcast without incident.”