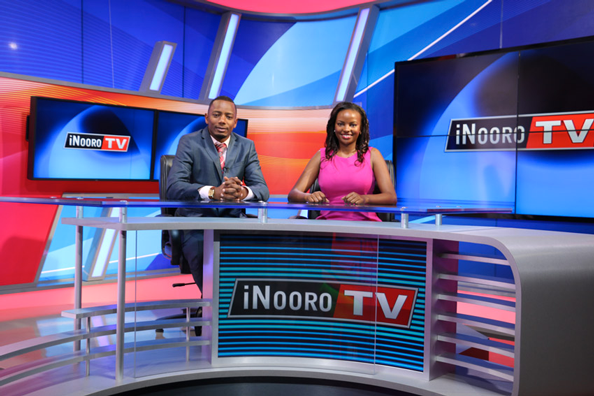 A Kenyan company has launched Inooro TV, a 24 hour channel in the Kikuyu language, with a dynamic and modern news set.

The channel, which is the first of three that will be launched, each in a distinct language, will offer news and entertainment programming.

For its newscasts, the station built a smaller but versatile set that includes plenty of backlit elements. By mixing both internally lit bands and other shapes with more traditional printed graphics, the bright and lively set gives off a modern and sleek look. An anchor desk, constructed mainly with a metallic toned framework and fronted with a branded graphic, is situated in one corner and flanked by a small video wall and band of video panels. Across the studio, a separate multipurpose area features more panels and internally lit elements as well as a unique hanging sculpture.

Throughout the set, the printed graphics use thin wavy lines to convey a sense of motion mixed with bright and bold colors, giving the set an active and vibrant look.