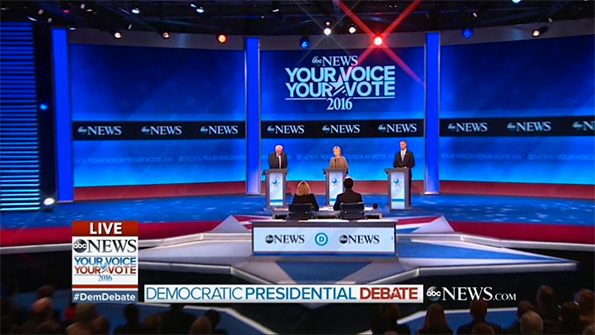 ABC News hosted the final debate of 2015 on Saturday, with less than 50 days until the first votes cast in the 2016 Election.

The debate was held at Saint Anselm College in Manchester, New Hampshire with sponsors ABC and the New Hampshire Democratic Party. WMUR-TV was supposed to be part of the debate, but was pulled at the last minute over a union dispute. One of the better setups this cycle, the stage featured a gentle arc with a large star in the center, mimicking the ABC News “Your Voice Your Vote 2016” logo. The stage was designed by Seth Easter with lighting by Dennis Size of The Lighting Design Group.

The stage used three large seamless LED displays behind the candidates, with a gentle animated gradient. The background included four large columns, along with the backlit stripes from previous ABC election sets.

Moderators David Muir and Martha Raddatz sat at a desk with two large displays, one displaying colors for the candidates’ timing and the other with a scrolling list of debate sponsors. Graphically, the debates opening featured stylized video of each candidate with large quotes, ending with the ABC logo.